Did we really have an episode with zero time-skips? I guess we did. So, let’s talk about what this episode has been about, which is two things, the first of which I’m surprised I didn’t see coming, and that’s sports. The second is the relationship of the past and the present.

So, sports. This episode’s historic event is the 1972 Sapporo Winter Olympic Games. Sports are an obvious topic to discuss when it comes to military, national pride, and the tension between nationalism and individuality. Wars have started over football in the past. Wars and hostilities have ceased for the sake of athletic competitions (and this is part of the legacy of the Olympic games in ancient Greece. And fascist regimes have, just like democratic ones, used these events to try and bolster national pride. All of these have very much been at the forefront here, which will be more relevant as we go into the second part of the episode.

The other thing directly relating to sports is the tension between self and group. You go there and compete on your own, and if you fail, sometimes others turn on you and blame you for not upholding your country’s honour. But if you succeed, it’s your country and compatriots that take the credit, even though it’s you who has had to make all these sacrifices, sacrifices of time and health and even one’s own person. You no longer are simply you, but you are the vessel for a nation’s hope, you are the symbol of its efforts of leaping forward.

And that’s how we move to the other thing this episode has been about. If the last two episodes had been about humanity, and how the show makes use of superhumans as a group as a metaphor for humanity, and then of Jirou as a metaphor for humanity, then this episode is finally spelling out what its own structure is a metaphor for. Its structure, and the things it chooses to bring forth. That would be, how you can’t let go of the past, how you can’t reinvent yourself without the past’s blessing and act as if where you’ve come from has no impact on where you’ll end up.

It begins with the voice of the nation telling its tool how the Sapporo Games symbolize the country moving past its “Post-War” state, how it’s leaping into the future. It even has them saying how “This will symbolize the erasure of the riots from 4 years ago.” Or rather, it’s a thing of the post, where it can be left and forgotten, and moved beyond.

But look at where we are. We are watching a show that’s nearly 50 years after the riots he’s speaking of, and that the show is made revolving around these riots is its creators screaming at us that we can’t move past them, that the past is still with us, still affecting where Japan is heading today. Heck, if we truly didn’t care for the past, would we be trying so hard to move past it, to forget it? Wishing to forget something is the surest proof that it remains with us.

And even if we look beyond the meta-commentary of how ConRevo as a whole is bringing up Japan’s past as still relevant for how it is today (and it certainly has some relevancy by mere dint of being brought up), then we can also look at the message most episodes of the show tell by their structure. How are ConRevo episodes structured? By time-skips. Why? Well, first of all, it enables the show to tell us complete stories, because if we see pieces of the story split over 24 episodes, 3-4 minutes at a time, it’ll all end up as jumbled. That’s true. But there’s more than that going on, there’s also how most episodes show us actions and their consequences. The whole series is about how one event can reverberate through the years and affect countless lives. We see the Bureau’s birth in sin as affecting its ability to perform its stated goals, and maintain trust.

Likewise here. Japan can’t move past the war, it can’t move past the riots, and it can’t move past its traditions,because the past is full of vengeful spirits, and you can’t simply get rid of old symbols for new ones. You can’t just take symbols while forgetting what they signify. “Everything for the nation!” they say, but it’s all about their honour, while they forget the nation that actually bore them to this age. You can’t let symbols be only symbols, but must remember that they stand for pacts people have made in the past, for people who are deserving of honour, of values that used to be valued. And these values were good enough to get you here.

It’s not a coincidence that this episode resolves by an appeasement and acknowledgement of the past. Not just Amato appeasing the elder god, but also the Three Birdmen who beg forgiveness from their predecessor. It’s all about tension between the past that cannot be left behind, and fear of the future, which must still be leapt into, one way or the other. It’s all about trying to be your own person, versus recognizing how you’re shaped by events beyond your control.

Iwashita (Ganba) thinks it’s the results that make the journey worthwhile, and ignores the value of the journey on its own. It’s unsurprising that Jirou and Jaguar’s conflict is unresolved, as each sees things from their own position, not trying to see how they create and are created by the other’s position. Neither tries to understand the other. One stands for “past”, and the other for “future”, but without bridging the two, there is no present.

Speaking of sports and symbolism, you’ll note how Jaguar and Kikko kept worrying about Amato making it, even going as far as to say, “He’s only human!”, but just like episode 14, Olympic athletes are a metaphor for superhumans as it is, they’re all about showing us the edge of human potential, and breaking our preconceptions of where they lie. “He’s only human,” but humans can do much more than we give them credit for. And that too is a big message of superhero media in general, and this show in particular. 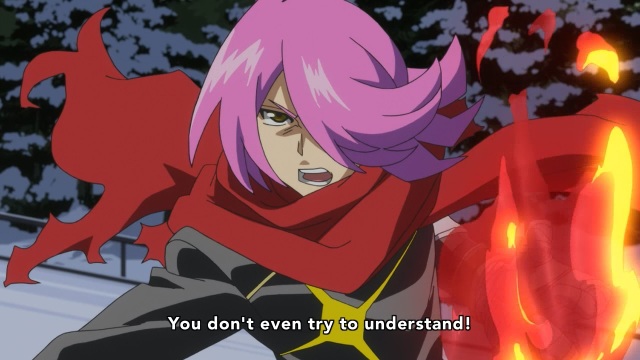 Latest entries appear italicized, as per a request/suggestion made. New/Updated entries: January 47.