I am now watching Kino’s Journey: The Beautiful World (also known as Tabi no Kino in Japanese). The series has an episodic, metaphorical, and allegorical nature, reminiscent of Gulliver’s Travels or Voltaire’s Candide, but more sombre. As such, I think it lends itself well to being watched one episode at a time, and also to being discussed, or kicking off discussion, so that’s what I aim to do. The first four episodes have been posted before, but had been put on hold due to how much energy writing them demanded of me. I’m excited to resume the journey once more, and will be bringing over the older comments as well.

There will be a new post on the second (or third if it begins early) Monday of every month (next post: March 11th) , each covering one episode of Kino’s Journey, or the films. You can buy the series here, or watch it dubbed on Hulu here, if you live in the United States. Each write-up might differ in style, length, and focus. I might spend more time on the episode, its ideas, or what it made me think of, or feel. These write-ups assume you’ve watched the episode, and the discussion that’ll follow could be had on the episode, the points I raised, or the questions I pose. Well, let’s get to it.
(Also, sorry, I miscounted the weeks this month, which led to this post being a week late, sorry!)

Is it just me, or did the head-slaver look like the “monk” from Princess Mononoke? Quite a bit, actually, and their characters are quite similar as well.

Before we get further, I have a question, how many of you didn’t see where this will go from about halfway into the episode? I think the whole nature of the episode, and its title, and the fact this is a show more about human nature than random observations about nature, more or less told us it’d go something like that. I dunno, I think once they spoke of their “Homecoming Festival” I was sure. I did suspect them from the get-go, that they’d attack Kino after she caught the first rabbit. They just struck me as “off”.

Well, before we get to what this episode was about, let’s talk about talking about what an episode is about! Ok, so here’s the thing. I’ve been to too many philosophy classes, but it’s also something that I came across in some of the more philosophical Sociology courses I’ve taken. We’d read a text, or get told of someone, and everyone would nod along as if they understand – and then the lecturer would ask us, “What do you understand? What is he saying here? Why is he saying this specific thing in this segment? Who is he talking to, or about?” And you’d see a lot of blank faces, furthered by the fact no one wants to venture an opinion that’d be shot down.

But you see, we all nod along, thinking we get what something is about, until we’re shaken out of our complacency, until someone points out that this “mutual understanding” we have may not be so mutual. That’s why instances where something apparently disrupts the Social Contract which we call consensus can be so unsettling.

And now we’re back to Kino’s Journey. What is this episode about? I mean, it more or less told us, so we’re all on the same page, right? Right? Well, of course we’re not. And once I tell you what I think the episode is about, or the show says it’s about, we’ll all nod and agree, or disagree, but it wouldn’t be as interesting as the thoughts the questions raised within us, as always.

So, what’s the episode about? On the surface level, which is what it speaks loudly about, it’s about hunger, and it’s about food. It’s about people treating one another as commodities, as strangers on the route that are there to be a stepping-stone, for our survival.

Kino knows her choice is arbitrary, and she accepts it. She’d kill someone else to help humans survive. Things were already killed for the sake of her survival. Why did she make this choice? Because she’s looking out for herself, and those like her. There’s nothing outside her perspective that makes her worthier of survival than those she kills. And that’s also why the position of the slavers is understandable – yes, they enslave other people yes, they killed them, but it was either they do it, or they die. 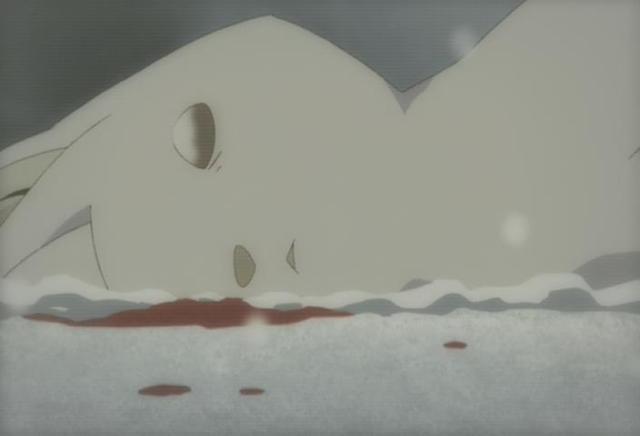 And that’s the sort of “post-moral” world Kino seems to exist in. If it’s either I die or you die, then there’s no real reason to prefer one of us over the other, except we’re we, for each of us. The actions we take? We’re taking equivalent actions either way. On one hand, that’s the best argument against eating animals – it is killing them, for us to survive. But on the other hand, we’re going to stand on others’ lives either way.

But living in a “post-moral” world doesn’t mean Kino doesn’t have a code of honour. You can say that the devolution from one world, with shared morals, perforce leads to one where people adopt personal codes. She does feel a moral obligation for those whose lives she had taken to keep hers going – now she must live on, so their lives wouldn’t be in vain. Kino must not die, not just for herself, but for the sake of the three men she killed, and for the sake of the three rabbits who fed these three men. Anything else, and it’d have been better for her to die instead of them. Of course, that code runs a tad counter to her mission as a traveler – she needs to keep going at least until she gets a new experience, and costs someone, or something else, their lives.

Kino’s code means she will not take advantage of others, when it’s not a question of survival, and that she’d be true to her word. Every traveler needs a compass, to remind them not just of where they’re going, but where they came from, meaning what is home, and home is the self, even should we escape it – because we forever define ourselves by the steps we’ve taken, and yes, the lives it took. 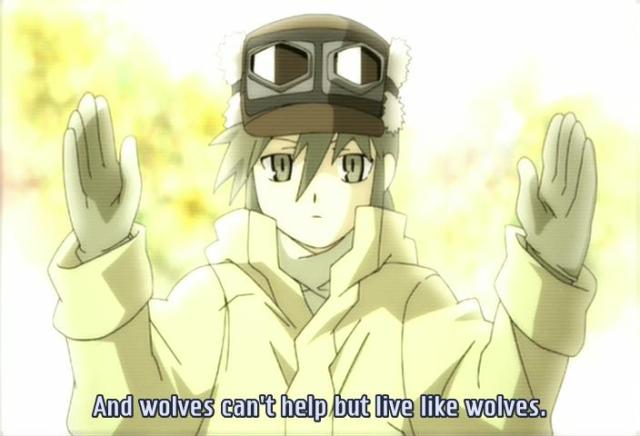 First, calling it “Hidden question” is a bit tongue-in-cheek, because the questions are those we ask, and then again, because this question is actually asked twice during the show, and answered but once.

“Would you do it again?” Hermes asked Kino. Earlier, not asked, she still answered the question, saying she’d have done so again – killed the rabbit, for the sake of her fellow men, who could repay her, or just because they’re more similar to her.

“Metaphorically speaking, we’re wolves, and wolves can’t help but act like wolves.” – What did the eyecatch say at the end of the episode? “These things will always happen, because we’re only human.” So here the “Wolves” means “Humans”.

So what is the “question” here? The question is one of the oldest ones of them all, speaking about the nature of free will, and of our own. If we have a certain nature, as humans, as wolves, are we able to break free of it, and make different choices? If we are to say we’ll make different choices when our previous ones used up another, is this experience and wisdom showing through, or saying that the other’s sacrifice was in vain, because you say it was needless? Perhaps it might even show a lack of respect for our past selves, and those who helped it get there – as we renounce our past self for the sake of one that could never be.

If we must be true to our nature, and our nature is to use others, then why struggle against it? Why feel guilty over killing another to help us survive? That brings us back to the “post-morals” world. Of course, a post-morals world is the same as a pre-moral world. A post-apocalyptic setting is also a pre-civilization setting. “The World Moved On” is still the most profound way to describe a post-apocalyptic setting, from Stephen King’s The Dark Tower.

But here we get to the thorniest of issues – will. Are we wolves who act out our nature, or are we humans who choose to be wolves? And if we choose to be wolves, does this mean we must follow all that it entails, and that one choose absolves or damns us to all that follows? See, is the whole question descriptive, or prescriptive? The slavers basically said, “This is what we are like, and this is the sort of behaviour it leads to,” but what if it is prescriptive? “I am a wolf, so I will choose to act like a wolf in each situation.” 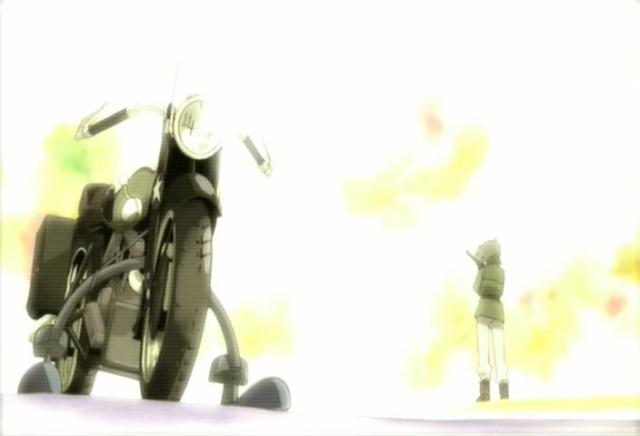 Kino didn’t answer Hermes when he asked her at last whether she’d have done it again. It? Helped people she came across? Killed them should it be her or them? She’s Kino, and she’ll do what Kino does. It doesn’t bear mentioning. And if she is willing to change, and it’d be her lives that sustained her through that change, would that make the cost the three rabbits paid worthwhile? Honestly, it’s the question, and the lack of answer, that matter. Any answer would be a narrative, and not as interesting as the asking of the question itself.

Feel free to answer as many of these as you like, in whichever manner you’d like, or discuss the episode or the main write-up while ignoring these.