Gin no Saji, known as “Silver Spoon” in English, is the latest manga by Arakawa Hiromu, best known as the author behind the best-selling action series Fullmetal Alchemist. Well, this show is quite different from FMA, and is based on the author’s history of having been raised in a dairy farm. The anime adaptation, which just finished its first season, with the next season having already been announced to begin airing in January 2014.

The protagonist of the show is Hachicken Yugo, a freshman in high school who ran away from Tokyo to an agricultural school in the countryside. “Ran away?” I hear you ask? Well, Hachiken felt overwhelmed by the expectations he faced from his family, his peers, his students, and mostly himself. There are hints he was bullied some, but it seems the main issue was that he would only think of his grades, of his future, and the pressure got to him – not because he wasn’t doing well, not because he couldn’t compete with his brother who got admitted to Tokyo University without even trying.

No, his issue was that he didn’t know what he wanted, what his goal was, what his dream was.

(This is a Things I Like post, it’s not a review, but more a discussion of the show and of ideas that have risen in my mind as I’ve watched it. There will be some spoilers in this post.)

END_OF_DOCUMENT_TOKEN_TO_BE_REPLACED Horizon in the Middle of Nowhere (Kyoukai Senjou no Horizon in Japanese) is a very interesting anime. Interesting enough that were I to wake tomorrow with a perfect understanding of Japanese, reading the series that had spawned the show is likely the first thing I’d do with that knowledge. Horizon is a good show with some very noticeable flaws, which keep it from being “great”, but I still think it’s more than worth your while.
This post is the third post in the series of shows about “Mind Expanding anime with Fukuyama Jun“, the other two were about Maoyu and Spice and Wolf.

First, let’s begin with a story that explains why I was favourably disposed to the show from the first episode. I’m a roleplayer; I’m talking about tabletop RPGs such as D&D. For those who don’t know, the Dragonlance series of novels began out of a D&D campaign (with moments such as Flint falling off a bridge early in the series being influenced by a critical fumble in the game that spawned the series). The Record of Lodoss War from the late 80s had also been based on D&D replay. Well, the reason for this story is that Horizon reminds me of the Exalted RPG by White Wolf (and more recently of the Japanese TTRPG Tenra Bansho Zero, translated and commercially released by my friend Andy Kitkowski).

Exalted, and the world of Horizon deliver onto you a world of many influences. You’ve got witches soaring through the sky, you have magic that is largely fueled by petitions to gods who must grant them, you have mecha, people with weapons several times their size, you have “named weapons” with mythical abilities such as being able to sever the existence of anything they reflect – including one of the cardinal directions. You have fights in which one side may use weapons and the other side can remain on equal footing though they’re only using an erotic dancing technique which renders them immune to damage, or debates which are actually “fights” (this too can be done in quite an awesome way in the Exalted RPG). City states fight one another, people sacrifice themselves for causes, androids and history-reshaping fights galore.

(This is a Things I Like post, it’s not a review, but more a discussion of the show and of ideas that have risen in my mind as I’ve watched it. There will be a large amount of spoilers in this post.)

END_OF_DOCUMENT_TOKEN_TO_BE_REPLACED END_OF_DOCUMENT_TOKEN_TO_BE_REPLACED

Maoyu, as Maoyu Mao Yusha (Demon king and Hero) is more commonly known, is an anime that also takes the time to teach its viewers some real world concepts, and as such this post will be the first of the three “Mind Expanding Anime” posts, and all three happen to have Fukuyama Jun portraying a main role in. Maoyu at its base is a tale of changing the world through technological and mercantile advancements, about the side-effects and benefits(!) of war, and is a romantic comedy show, of sorts. 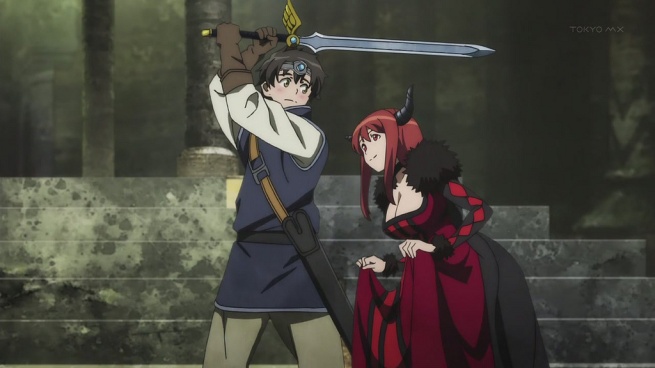 “Hello! I don’t want to fight” said the Demon King to the Hero

(This is a Things I Like post, it’s not a review, but more a discussion of the show and of ideas that have risen in my mind as I’ve watched it. There will be major spoilers in this post. I will also make predictions as to what I think will happen in the future in the story, not based on certain knowledge.)

The first episode is one of the better first episodes I’ve seen. The Hero storms the castle of the Demon King, ready to kill him in order to stop the ongoing war between humanity and the demons. It turns out however that the Demon King is a buxom young-looking woman, who tells the Hero that she loves him, doesn’t want to fight him, and wants to enlist his aid in bringing peace to both humanity and demon-kind.