I touched upon this concept in my write-up for the premiere of Kabaneri of the Iron Fortress last night, but shows that want to tackle philosophical questions often have to tackle the issue of telling us what the themes are early on, before it actually elaborates on them, and makes them fully-realized. ConRevo definitely is a show with a lot it wants to say (and you might want to take a look at the write-up I wrote for the first cour on that topic), so what does it do here? It doesn’t change the character this episode revolves around, Android Detective Shiba Raito, but it had presented it to us when our knowledge of the characters and the themes is much improved.

“Wait, what do you mean, it didn’t change the characters? Shiba Raito is a totally different person now!” And I hold that he isn’t. This episode was so terribly ironic on so many levels, but most of all, his. It kept cycling around how Raito transformed and then didn’t, that it’s hard not to look at it and be a tad amazed. But, let’s start from the beginning.

(There’s an updated chronological timeline at the bottom of this post. Also, full episodic notes.)

The other episode where Raito had much screentime was the one leading up to this episode’s opening, in the in-universe chronology, episode 3, where he argued that robots’ sense of justice is immutable and objective, which is why they should be the arbiters of justice and morality. If this episode has told us anything, it isn’t that he changed because he no longer/not always believed it, it’s that he has never truly believed it. Rather, he has embarked on a quest to convince himself of this truth. He’s desperate to believe, and he snapped, and is constantly snapping, from this tension within him. This is also where Shiba Raito differs from Earth-chan, who truly does believe that justice can be so black and white, and is growing up, rather than seeking to return to this state of innocent obedience as Raito does.

Raito exemplifies why people vote for demagogues across the decades (and this is a point I hinted at in my cour-1 write-up, but I feel the need to elaborate on it here. Not just because it’s relevant, but because it’s a moral imperative). Demagogues promise us a return to a simple world, a world of right and wrong, a world where we can know who the enemy is, and by opposing them, we can be just. It is the world occupied by Earth-chan, a world of symbols and bright and clashing colours (just like this show’s art-style), rather than one where we must question who we are, and what we are fighting for. 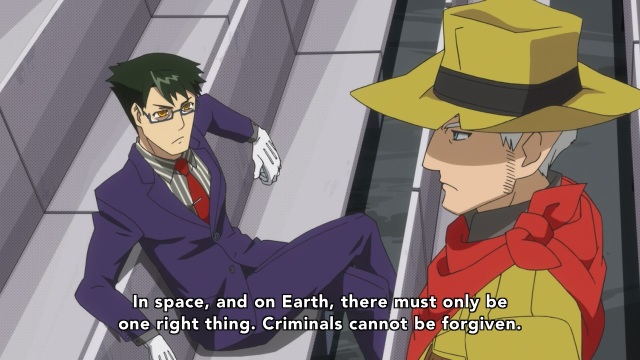 But Raito is wrong. I don’t mean he’s morally wrong in that he wishes to return to his unthinking and old self, I mean that he’s wrong to think he ever was what he’s talking about. Raito has always been human. To begin with, he is the copy of a human mind, a perfect copy that is no more incapable, or capable, than the rest of us to deal with such contradictions. We all wish to erase these contradictions, but we usually do it by means of blaming others, and not ourselves. Raito fought against bad superhumans to protect humanity and justice. Raito fought against superhumans for the weak human he was, and also for the sake of the superhuman he has become. He fights against Jiro because he wants Jiro to prove that what he says is possible and that justice is achievable, while also being afraid that just like the situation with Daitetsu and Earth-chan, if Jiro is right, it’d mean he’d been wrong all along. And that’s the one thing he truly can’t take.

And the fear of having been wrong all along is what is finally breaking Raito. He owes his current life to being experimented upon without his consent, of being made a tool for war. And yet, he can’t help but find the way life and choice has been stripped of the people in the American submarine deplorable, and you know what? It’s also criminal. He has a past as a human, yet he sought out the two androids who are the prototype for what he is, as if by looking at them he’ll find out where he should go now. He quested for justice as an extension of law, but when he was made into a criminal, he decided that the country which would legislate such a law must be unjust, and seeks to destroy it. His entire existence is ironic, it is the quest for simplicity, but the deeper he digs, the more complex things must become. It is the quest to “return” to seeing things in black and white, when he never could see them as such to begin with. A quest of a policeman who seeks to enforce the law in order to protect people, who is told to capture innocent people in the name of the law. And he is torn. 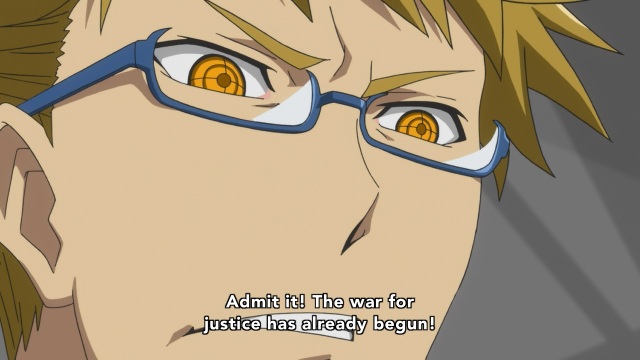 Shiba Raito is a robot. He can’t change. Shiba Raito is a good person, and he can’t stop being one. As he controls the robot, he can’t help but notice how he’s being made into a tool, how he’s being robbed of his agency, as if he were one of the non-humans aboard the submarine. Shiba Raito wishes to stop thinking of what is wrong and what is right, he wishes to be able to declare what it is. But it’s all a mask, because he knows he must fight for justice, and he knows he has no idea what it is. He has to judge, just like us, on a case by case basis.

Raito loathes Jirou, because if he destroyed him, he’d also destroy the symbol that he is in the wrong, that there can be superhumans who fight for justice while also fighting against the law, and who have a differing justice. Shiba loves Jirou, because he sees him as a potential messiah who could show him how to fight for justice in a world where the law has been co-opted. Where the government makes use of innocents and arrests them in order to silence them. A world where a supercop must fight for unjust justice.

The important lesson from the space android is you can’t hope for an outsider to come and sort things out. You invite them and they seem to have good intentions, but they wish to take your soul away from you. It’s up to you. Up to us.

This episode had a bunch of ironies besides, such as the population being made into a tool, used as a bait, to capture S Planterian, who was Grosse Augen, when the Bureau had done the same in the very first episode, where it has used S Planetarian attacking people in order to be rid of Grosse Augen. Or Jirou making use of Kikko’s trust in him in order to strike at the people she’s part of, just as was just done to him.

Most of all, the “peace-keeping coalition” that had been fighting for millions of years. This is the form of inhuman and childish justice that is spoken of, and then he tells them they are too immature to talk of justice, when the show hasall along been about how black and white morality is the realm of kids. Then again, they were just arguing over who gets Jirou…

The episode started and ended in a very “Anime-like” manner, with Jirou and Raito going back and forth about why Jirou is there and making use of Raito’s electricity, and ending with the maid saying how she kept Equus clean and shiny in case Jirou ever came back for it. Oh yeah, Emi is one of the scarier characters in anime. She’s a sane, cold and calculated stalker.

In terms of historical references, this is about the Okinawa Reversion Agreement, where Okinawa was finally returned in May 1972, or 7 months after this episode’s “past” segment. America demanded to be able to place Nuclear warheads there so they could make use of them in case of emergency, which in this case would be superhumans and Master Ultima’s Kaiju. Japan wanted nothing to do with nuclear power at the time, which echoes the plight of superhumans, as Jiro is the atomic bomb’s representation within the show. We’re also told “After the Kaiju Boom died down?” which reflects the fear of a renewed string of protests, which is what the Kaiju Boom represented in the show.

Screenshot album. So many great screenshots in this episode that are just perfect for capturing the theme of the entire show. So many.

OP – First part reminded me of some songs from Transistor, which has an amazing OST and great songs, but here it left me feeling nothing. Just seeing all the characters static wasn’t exciting either (and not a fan of long-haired Kikko). 2nd part was more energetic, both in terms of visuals and audio. While I’m not crazy about the audio, the visuals were nice, with some really nice still shots (especially Fuurota sitting forlorn and Emi‘s nightmarish visage), and of course, the requisite OP per season where people (break-) dance. Mixed bag, but the visuals of the 2nd half were great in atmosphere. 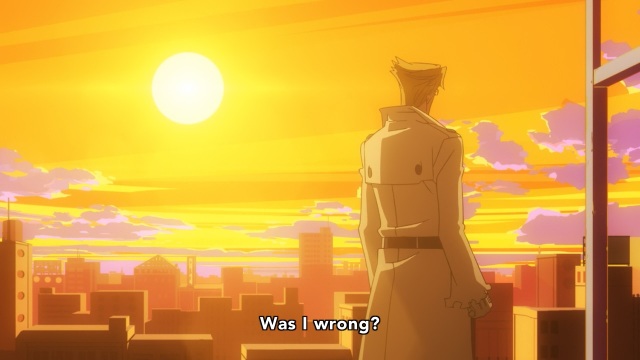 ED – The sound was alright, but man, the visuals. So many symbolic moments, and them walking across with and on top of a symbol for Japan? And Kikko’s reaching for Jirou, but only her shadow actually touches his, and she remains unable to cross the distance. Good stuff there.

I’m not going to organize it to any serious degree (I already spent enough time on this episode), and I’m not going to share these most weeks, but in case anyone is curious what my notes look like, which I take as I watch the episodelook like, it’s like this: 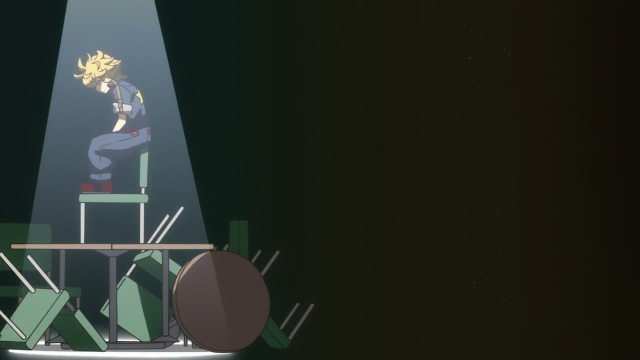 So, the show is back, with a bunch of authors on board. Will there be time-skips? How many? Well, let’s find out.