Let’s talk about contexts. The obvious context for this episode is the Vietnam War. It’s not the context for this episode alone, as the “Shinjuku Riots” also revolved around Japan’s involvement with aiding America in said war. In episode 17, revolving around Devilo and Devila, I drew parallels to how the Native American population was treated, which this episode references as well. The episode made use of the PTSD, no place to return to, and the way the war changes you, all of which had a big place in Hollywood films about Vietnam, but it is even more acrimonious of America’s involvement and nature than that, which is all about context. 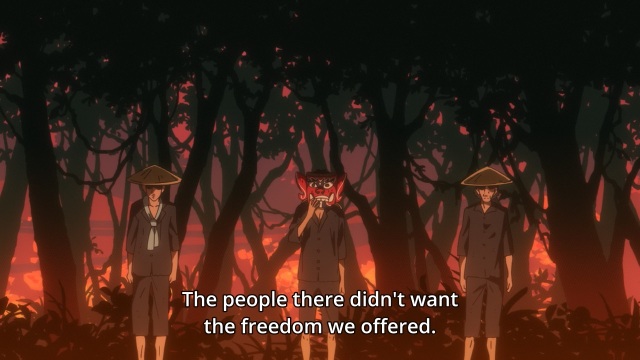 I’ve discussed before how the whole show is in some ways a Cold War story, and about Japan’s honour, honour that was trampled by America after World War 2. This context is important, because there was a tendency by the two world powers to make use or get involved in the matters of other countries, then leave the clean-up to them. An example of that would be Afghanistan, where what later became the Taliban was supported by America in their bid to fight indirectly against the USSR. While there wasn’t as much “direct colonialism” as was seen by the Imperial Nations (including France and The British Empire) pre-World War 2, there was still the view that America was going to come in and “liberate” the people, give them democracy, whether they want it or not, and then leave them to handle building their country, with a ruined infrastructure, for their own benefit. The most recent example of this would be Iraq, in 2003, or some of the “Arab Spring” revolts of 2011.

END_OF_DOCUMENT_TOKEN_TO_BE_REPLACED

You know, this whole episode felt like one big homage to the tokusatsu genre, and if we look at a recent anime franchise with ties to the tokusatsu genre, it’d be Garo. We’ve had our knight in a crazy armour, the “monsters” she was fighting, a sword beam, etc. This is a love-letter to a simpler time, with simpler media. Or is it the case? You know Power Rangers? It’s been influenced by Super Sentai, and other tokusatsu series, and we all remember how the villain who’s redeemed and switches sides is actually a pretty common motif in these shows. 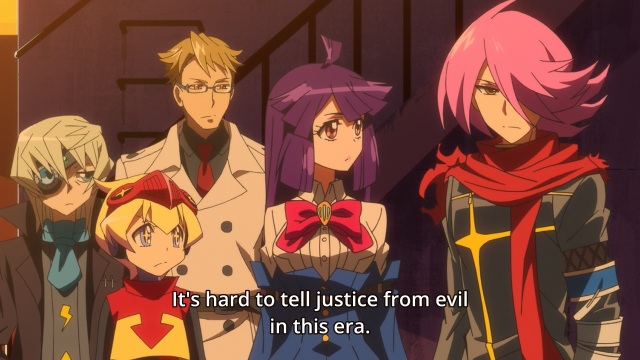 And this is obviously a big part of the theme behind this episode. Continuing directly from episode 16, where we discussed how the past can’t be ignored, or it will come back to haunt you, we reach this episode, where Jirou speaks in platitudes and tells Koma how she fit better in the past, where you could clearly tell right from wrong. And just moments before the show had Koma tell Jirou how wrong he is, I thought to myself how those lines are a betrayal to everything the show has been saying up to now, especially in this cour, and in this episode as well. The whole story with Asahi is exactly about how good and evil aren’t clear, and were never clear. Jirou is acting somewhat like a child, thinking there was no wrongdoing and tough circumstances before he came around, but that’s obviously nonsense.

END_OF_DOCUMENT_TOKEN_TO_BE_REPLACED

ConRevo is a show that always builds on past episodes, and you could see it with small moments such as thereappearance of the Tartaros Bug Lady that we’ve first seen in episode 2, or the unsurprising return to one of the best lines in the show, that first appeared in episode 8, “If you’re an ally of justice, does that make me evil?” which I could see why a writer would wish to return to, or another writer commentate on, because it’s just such a good line and such an important moment. But more than just commentate on the past, a show like ConRevo can commentate on the in-show future (aside from dealing with the show’s political climate in modern Japan, as I mentioned in episode 16’s write-up). 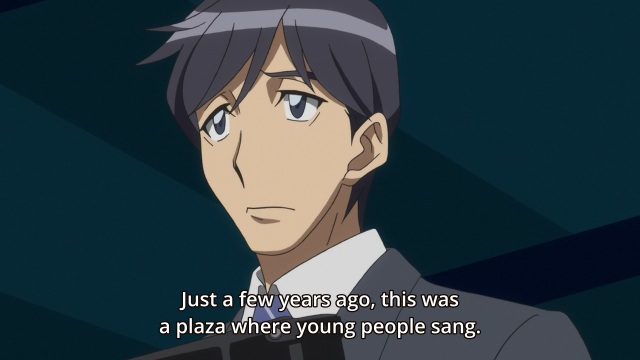 What are we fighting for, if this is the face of “victory”?

It’s important to actually pay attention to when this episode takes place, inside the show’s chronology. It begins a month before last week’s episode. There are small callbacks with moments such as “This is a passage, not a plaza,” but more importantly was Shiba Raito releasing criminal superhumans, especially one who was half-Devil, from Devila’s tribe. This led to people being more on edge against superhumans in general, and the Devila tribe underground superhumans in particular. But are they just looking for an excuse?

END_OF_DOCUMENT_TOKEN_TO_BE_REPLACED

Let’s start with the “perfect shot” from this episode (NSFW-ish). Just so pretty. It’s also saying a lot that these two are holding the Earth in their hands so lovingly, because they love the Earth, even as they are forced to abandon it.

The past still have power, but it’d be a mistake to overstate it.

This is a continuation of last week’s episode of modern humanity in general, and Japan in particular, renouncing their past, renouncing their obligations to the world and to its inhabitants. You’ll note how Devilo says “introductions are etiquette where I come from,” we are told they’re as much “devils” as yokai, and then you realize there might be some pacts being broken here. Also, “The Pied Piper of Hamelyn,” right? He only led the kids astray when the deal that was made with him wasn’t upheld. Same here.

END_OF_DOCUMENT_TOKEN_TO_BE_REPLACED

Did we really have an episode with zero time-skips? I guess we did. So, let’s talk about what this episode has been about, which is two things, the first of which I’m surprised I didn’t see coming, and that’s sports. The second is the relationship of the past and the present.

So, sports. This episode’s historic event is the 1972 Sapporo Winter Olympic Games. Sports are an obvious topic to discuss when it comes to military, national pride, and the tension between nationalism and individuality. Wars have started over football in the past. Wars and hostilities have ceased for the sake of athletic competitions (and this is part of the legacy of the Olympic games in ancient Greece. And fascist regimes have, just like democratic ones, used these events to try and bolster national pride. All of these have very much been at the forefront here, which will be more relevant as we go into the second part of the episode.

END_OF_DOCUMENT_TOKEN_TO_BE_REPLACED

Before I move to anything else, I want to open with how this episode and last episode are saying one thing very clearly. Here is episode 14, where Jaguar, Emi, and the rest note how Raito is the most human of them all. And here is the moment from episode 15, where Jirou tells Emi and Kikko that The Rainbow Knight was in fact Superhuman. Raito was human in spite of being a robot, while The Rainbow Knight, a person without supernatural powers, was more than human, because of what he was capable of doing. The show is very clearly here, over these last two episodes, rejecting the xenophobic and racist ideas of essentialism, that we are what we are, rather than who we are. “All he wanted was to create a clear legal line between human and non-human,” and that should bring to mind The X-Men, and what its two Jewish creators were thinking of when they wrote that thing up, the Nuremberg Laws. 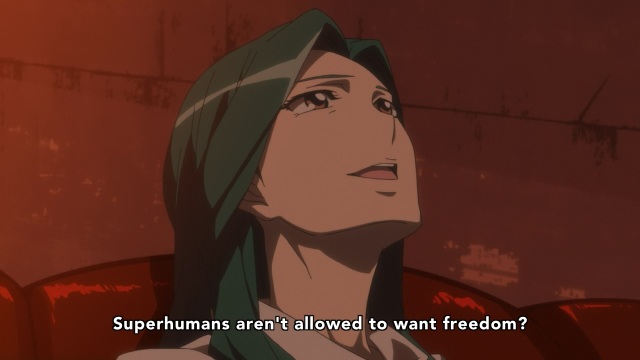 The Nuremberg Laws were chalked up to protect “German purity”, and were a bunch of antisemitic legislature which defined who is a Jew, and what they’re allowed, or not allowed to do. What was outlawed? Oh, you know, marriages between Jews and non-Jews, for instance. And here it is very easy to see how it becomes very relevant to this episode. And if we look at Haruka’s song, she’s shouting at us what her story is about, it’s a story of giving up hope, of wanting to go away. It’s of being betrayed by society and its promises. It’s a story of wanting to be free to be who she is.

END_OF_DOCUMENT_TOKEN_TO_BE_REPLACED

I touched upon this concept in my write-up for the premiere of Kabaneri of the Iron Fortress last night, but shows that want to tackle philosophical questions often have to tackle the issue of telling us what the themes are early on, before it actually elaborates on them, and makes them fully-realized. ConRevo definitely is a show with a lot it wants to say (and you might want to take a look at the write-up I wrote for the first cour on that topic), so what does it do here? It doesn’t change the character this episode revolves around, Android Detective Shiba Raito, but it had presented it to us when our knowledge of the characters and the themes is much improved.

“Wait, what do you mean, it didn’t change the characters? Shiba Raito is a totally different person now!” And I hold that he isn’t. This episode was so terribly ironic on so many levels, but most of all, his. It kept cycling around how Raito transformed and then didn’t, that it’s hard not to look at it and be a tad amazed. But, let’s start from the beginning.

(There’s an updated chronological timeline at the bottom of this post. Also, full episodic notes.)