Having watched seven shows, all of the ones premiering on the first week of the season, it’s time for a short round-up post where I share my impressions of them. As I actually wrote something longer for each of these shows, I’ll keep it brief, and link to the lengthier impressions post.

Plastic Memories is off to a great start. Its direction has a great knack for comic timing, and even if all the gags are physical or old hand, they take just the right amount of time, or are carried so fluidly and naturally that they don’t draw undue attention when they don’t wish to. The drama tearworks were reserved for the episode finale, and even there, the choice of what to show and when to show had greatly enhanced the effect.

All of that would be nice and dandy, but the show is actually dealing with legitimate sci-fi issues, with legitimate human questions, on the nature of life and death, our relation to others, and our relationship with our jobs as signifiers of our existence. I can’t wait to see where it goes, and hope it keeps at it at the current level. 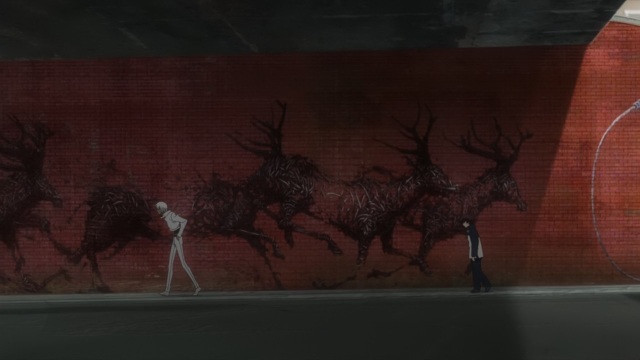 There’s not much to discuss in this show in terms of themes, though one could look at all the visuals and make many thematic statements regarding them. The director’s last work, Kyousougiga (Capital Craze), was also incredibly rich. The other show this one makes me think of is Ping Pong the Animation. Like that show, Kekkai Sensen is not a master tale, but the first episode similarly delivered a master performance of superb execution. Story? Forget that, this was a spectacle to watch, and not just because things were “well-drawn” and “well-animated”, but because every single frame and movement felt purposeful. This was delightful. I only hope the story, when it appears, doesn’t detract, and is actually on par.

So sayeth the 8-man.

The cast is back! While Hachiman looks as if he gained a decade in the new art, the cast is back! All the old insecurities, all the small moments of trying to not see what will break them, of trying to believe in lonely lies in order to hold strong onto their pillar (that ED is so suggestive), the fujoshi (rotten girl) humor that falls flat, and the Totsuka humor that I feel guilty for laughing at, they’re all back. It feels as if the show never left, so what you’d think of it is entirely reliant on what you’ve thought of it up to this point.

I also thought this would be a great opportunity to write about how the characters operate, what motivates them, why they choose to be “dense”, and how Yukino has always been as “weak” as Hachiman.

Fate is back with most of what appeared in its first half! A sexually exploitative presentation of Saber, an extra-heavy dosage of chuuni fan-ficcy prose for basically anything Caster and Archer say, especially to one another (just like in episode 7!), and some incoherent ramblings on ideals by Garcher. The best part of the episode which made it overall enjoyable for me were the silly RomCom antics between Shirou and Rin. Sadly, missing was the action. Oh well.

I actually did a fully episodic breakdown of this episode, so check it out.

Well, the promised food-gasms were properly foodgasmic. This show is a colourful and energetic shounen battler, where the main “twist” is that instead of fighting people directly, or even engaging in some sport matches with them, we’re regaled with extreme, well, cooking. This just makes it clear how ridiculous the genre portrays things, but the true twist of the show is the highly sexualized treatment of food and its eaters. The real question is whether the focus will be on the shounen battler sensibilities, which I like, or the ecchi/fan-service, in which case I haven’t finished such a show yet. It’s interesting, at least.

This show was pretty average, and pretty non-descript, honestly? The CGI wasn’t great, and was actually terrible in one scene where a bunch of CGI guards ran around. Characters were expressive in the general Arakawa style (looked pretty Fullmetal Alchemistish). We’ve had some discussion and setup of slavery, religious crazies, and a heaven for us to leave behind, a character who’s weak and looks up to his parents. The journey started, but there really wasn’t much to be had in this episode. But it was just setup to be “discarded”, I guess.

Take a Great Teacher Onizuka clone, infuse it with harem RomCom sensibilities. Sounds mostly fine, right? Now give it a cast of good voice actors that don’t fit their roles, uninspired, boring, bland, and even flat art, and you get this show. I didn’t find it terrible, and not even “bad”, but it just lacked anything to make it good either. The most inexplicable thing is that it seems like you’d have to get introduced to the love interests one at a time, and only after it all happens you’d actually get the series “started”. I’ll prolly give it a couple more episodes.

Overall First Impressions of the Season: Most of the premiers thus far hadn’t been very impressive, and even Kekkai Sensen was more impressive in its delivery and style than actual “content”. Everything, for the most part, just like Arslan Senki, feels as if it’s drawing its breath, before sprinting forward. That’s fine, but not what I usually attach in my mind to the concept of “premiers”.

Dear readers, what do you think of the premiers thus far? Anything that surprised you, for better or for worse?