(To clarify, this is the first episode in the 2nd cour.)

So, where did last cour’s finale leave us? With Saber taken by Caster, to be turned into darkness (“defiled”, ahem), with Shirou being left behind by Rin and Garcher. I do think it was a very awkward place to stop the cour, not on any high note of action or drama, honestly. That episode sort of robbed the tension at the spot it chose to end.

As most of my knowledge revolves around the first route, and here it’s more hearsay, plenty of stuff to surprise me is expected! This show is very chuuni, and takes itself way too seriously, but it’s still overall enjoyable to watch. The comedy was actually enjoyable, and hopefully we’ll get a lot more action in this cour.

1) Weak and helpess Shirou is reminded of how helpless he is, and so, his thoughts turn to the last time he was entirely powerless.So, another turn around the rosie with Shirou’s ideals, but seems this time he actually reflects on them, rather than declaring them to convince others, to convince himself: He wants to become a hero, to make others happy. He is willing to sacrifice himself. Why? Because he wants to prove him existing in the world is worth it. Not by his existence, but by what he’ll do for others, because his life, his wishes, no longer matter. He’s someone who should be dead, so this second life isn’t his.

2) Oh, just your bent-over with behind revealed Saber… I thought this poster was just your usual fan-service fare, not taken from the show proper.”But your Servant body cannot resist me.” – Oh my, Caster right back with all of her forcefully suggestive imagery.

“Surely you can sense my Command Seals eating away at you, little by little!” – Caster, whose role in the show is to deliver the ultimate chuunified villain lines.

3) Caster’s submission for the crazy teacher, running towards him after he appears, to appease him. Everything about Caster screams “power dynamics.” Almost feels like someone who gets beaten, and then beats those weaker than her to take out her frustrations.

2) The Ruins of Cynicism:

1) “I don’t care how you accomplish it. All I need is the result.” – So the sociopath is going to watch the torturing of Saber. He’s also exemplifying, and living, the ideals Rin spouts but does not believe in, and the ones Shirou rejects.

2) A ruined world, where nothing but desolation and swords remain. A post-apocalyptic setting, the result of endless wars. That’s Archer’s mental landscape. Meaning, that’s how Nasu views cynicism’s effect and cause on us. Doesn’t look pretty. Abandon cynicism!Also tells you, his goal is just like Shirou’s, to save humanity, to help the world. But he’s given up on it after enough times. He’s telling Shirou because he sees a younger himself in him, and he hates it. Despises the naiveté.

3) The Fortress of Sociopathic Idealistic Solitude: 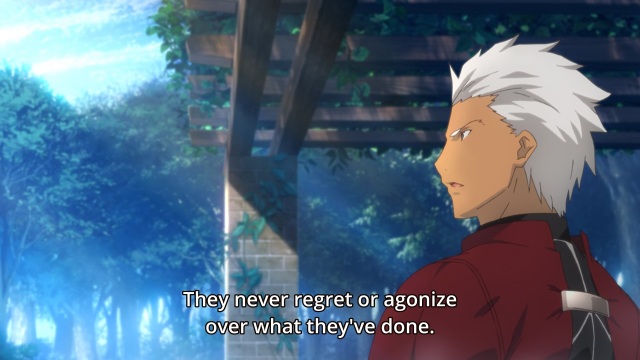 He presents this as a /good/ thing.

1) “If I can, I want to avoid having any regrets.” – So does everyone. And you’re asking the one Heroic Spirit whose entire personality is based upon the regret, the rejection, of his past naiveté.

2) “People who can live without regrets are [those who don’t make mistakes and] those who don’t think they’d make/made mistakes.” – Yes, without the stuff in brackets, that sounds about right. People who are self-righteous, so in love with themselves that they think they can do no wrong. Most people just lie to themselves about it, of course.

3) “They never regret or agonize over what they’ve done.” – Archer speaks of this as an ideal, and while always going forward is indeed something to strive for, it’s also how you give birth to monstrosities who cannot advance. I mean, without learning from what you’ve done, how can you do better? Hm? Hm. Then again, Archer’s messages are usually full of such rash and poisonous bravado, that’s his “too cool for school” shtick, he’s here for Shirou to reject his messages.

4) “Tohsaka Rin can believe in her own path to the very end without regret.” – Note he used her surname here.Tohsaka Rin, daughter to an existing magician line. Tohsaka Rin, who kept hearing such messages in her father’s name. 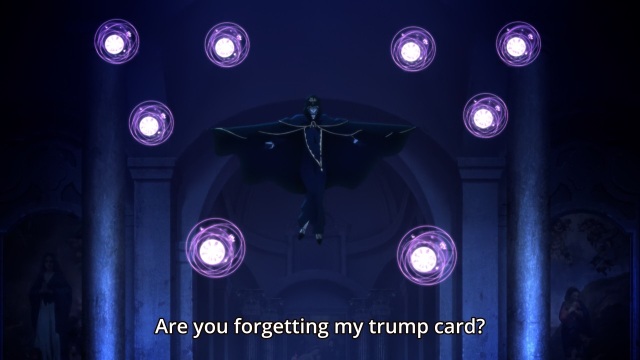 Caster and Archer converse, and the chuuni lines return!

1) This, Archer cannot allow. The return of Shirou, and not only that, but Tohsaka helping someone who is a rival, rather than taking Saber into her own fold? Tsk, tsk. So much for “Go forward, think only of yourself,” which was the subtext of Archer’s description of “no regrets”.

2) Rin is relying on Saber’s shounen spirit, that’ll allow her to resist the unresistable commands.

3) “You see, defeating her here struck me as idealistic.” – Archer’s role in this arc is: “If there’s one thing I hate, it’s people striving to be better!” Yes, this betrayal was slowly built up, over all the times he disagreed with Rin, and sided with Caster’s methods, and even goals. Well, UBW Archer sure makes different decisions in life than the Fate route one.

4) “Isn’t it only natural that I go over to the winning side?” – Archer’s patented No Regrets™ philosophy at work.

5) Archer is flat out telling Caster that he’s with her because it serves his best interests, not because he’s “loyal” to her. It’s also a warning that should the situation change, he’d abandon her. This is like the good old days of playing Worms with my cousin against the PC, with our non-aggression pact till we take the PC out. The only question was who will betray the other first, not whether it’d happen ;-)

1) “If I could not control you myself, it would speak poorly of my abilities.” – Caster, you need to find a new speech writer, really.

2) “I want to attach one condition to my joining your forces.” – Shouldn’t you have said that before handing over your command seals? Also, you have the same person writing your lines as Caster, Archer, and you need to switch as well ;-)

3) “My price is that you let them leave.” – And soon Archer will give us some reason, but it still feels idealistic.”I merely thought it’d be wrong for a Heroic Master to cut down his heartbroken former Master.” – Wow, that’s idealistic as fuck.

4) “If they are fools who embrace a hopeless fight, they will be cut down without mercy.” – And that is why Archer finally turned his back on Rin. Because she let ideals blind her.

5) “I side with the most powerful.” – Just like the veiled threat at Caster, this is a veiled promise aimed at Rin, if somehow she’d become more powerful than Caster, he’d have no qualms about rejoining her. Also, dat smirk.Also, everyone seems to be forgetting about a certain Berserker, and his diminutive master. 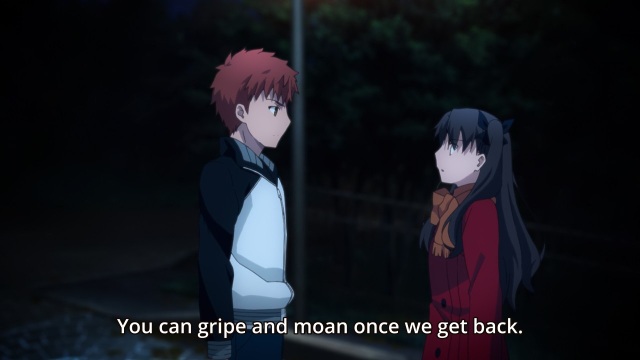 1) “You can gripe and moan once we get home.” – Emiya Shirou always knows what to say to girls.And then she actually cried and said he’ll make this right. The tsundere is strong within this scene. She’s crying over his empathy, over him pointing out she’s emotionally hurt, and it’s worse than his physical pain.

3) “Failing doesn’t mean you’re wrong.” – While he has a point, this is the same form of hard-headed idealism that leads to the same position as Archer, where no matter what happens, you think you haven’t made a mistake. No regrets, just discarded bodies left in your wake.”I don’t regret things either” – He said it! And he even said Tohsaka is brilliant! Yup, this calls right back to the Garcher talk. Garcher might talk down of ideals, but he’s preaching his own form of idealism as well.

4) What an awkward love confession. Good stuff.LOL, her pushing him off the rock. Talk about super-stereotyped. Very cute. I couldn’t make this up even if I wanted to.

6) “I was really happy you saved me.” – Inorite? Anyone who isn’t Shirou is usually happy when they’re saved from being killed. But I guess it’s not as obvious in a world where people don’t die even when they are killed ;-)

OP – Much more “thoughtful” than I’d expected it to be, introspective? I don’t know what to call it, but quiet and deliberate.

ED – Ok? Forgettable, really. Don’t have anything bad to say about it, but also nothing good. It just doesn’t leave any impression.

This episode was Fate/Stay Night at its chuuniest in a long time, but I actually like this show when it’s chuuni. It’s naive and adorable and sweet. You just don’t need to take its messages too seriously. Archer and Shirou’s little spiels about “no regret” show exactly why, because you end up leaving the dried husks of everyone you no longer consider behind.

But the chuuniness was good, and the romantic talk between Shirou and Rin had been one of the show’s strong points up to now. No action, but we can’t have it all. A solid cour-premier, thoroughly enjoyable, just don’t try to act like this at home!