I was really curious where they’d go with the show after last episode. As I wrote about that episode, it didn’t really feel like a climax, because of the delivery, and I wondered what they’d do now that they’ve done away with the protagonist and us still having two episodes left. Then after Yashiro’s monologue at the beginning, I actually thought that after Satoru’s proclamation, he saved him from drowning, like the hamster, and kept him in a cage, to ply him from his knowledge. Well, the reveal about 6 minutes in worked. They dragged it on and on, and it was effective, so good job there.

Speaking of effective versus non-effective, or rather “Effective versus overbearing,” look at Sachiko’s tears. A heart-felt moment, I teared up myself. When it comes to tears, less really is more. Unlike what we got when Satoru was crying, which had me chuckling a bit, because, I mean, just look at it :P Also in that scene, I can’t really tell if adult Hinazuki is voiced by Yuuki Aoi or not. Half the time she sounds like her, and half the time not. I like this voice. I wish anime voice acting were more naturalistic in general, y’know? Just as I like Hayami Saori a lot more when it’s natural.

Ok, moving from production to themes, an interim spot that continues directly from voice acting is the voice. Up until now we’ve had adult Satoru’s voice for adult Satoru, and his thoughts, whether as a child or as an adult. But now we’ve got the reverse, an adult body with the child’s inner voice. The show is telling us that it really is child Satoru inside that body now. Not child Satoru that grew up and was trapped in his adult body all along (because him never having grown up is quite a theme in this show), but truly the child. Helpless and weak. The use of the coma is also interesting, because it’s as if he’s traveled 15 years into the future, eh?

Falling back into the same dangerous pattern.

And like any story about time-travel, or any generational story, it’s all about everything repeating itself. We’ve had Yashiro’s monologue at the start (also, note what it says about his world-view, surviving at the expense of another),and then him taking Satoru on a ride, and making sure to put his gloves on before pressing a button, and then having Satoru press the button to the roof, so his fingerprints would go there. Yashiro’s monologue last episode made it clear that to him it’s all about the cycle, that he has to repeat these actions each time because it’s the best moment of his life, anew. And we’ve known it, since Satoru’s mother identified him in 2005. So, that’s one cycle repeating, and one of the least interesting ones.

The more interesting cycle is where Satoru is still himself. On the simplest of levels, he sees a lonely girl (whom Yashiro notices as well), and he befriends her. Simple as that. But look at his interactions with his mother, “mother was trying to avoid the topic of my past,” came first, and then we’ve had the capitulation to this request, “If that’s what mom wants, then maybe I don’t have to remember.” And this is the show’s original sin all over again. This all started with Satoru having a hole within himself because he was told to forget about the murders that went on when he was a child. Because he was told to remain ignorant and a child, so he couldn’t move on. 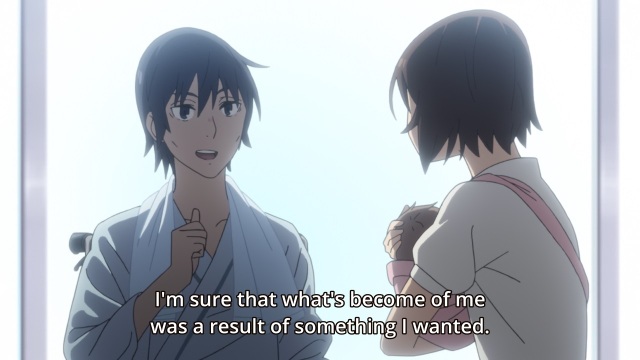 And moving past, by accepting responsibility.

So here we are, with Satoru being told to just take it easy and forget once more. But there is a different, the “revival” was a time-leap fueled by Satoru remembering, and then becoming unwilling to forget and let bygones be bygones. We see that change carry over to the present, with him being determined to walk forward on his own, even if it hurts. It’s time to join the land of the living, not hide as a delivery-guy in a pizza joint.

And of course, a combination of all of the above, Satoru still sees himself as a hero of sorts, and is definitely a child inside. I mean, how else would you explain that really dumb move he’s pulled as the show ended, where he’s alone with a serial kidnapper-killer on the roof, and he tells him he remembers his true nature? I mean, really, Satoru? Though I guess this could be explained in one of two ways. The cynical way would be to say, “This is the penultimate episode’s cliffhanger, so they wanted to end on a crazy note,” so he’s acting stupid because this is what moves the plot forward, raises the stakes the most. The second way takes his decision to move forward using his own power, on his own, and having him face the killer as he always intended to. And yes, he’s a naive child, but the show hammered that long enough for it to be believeable. Believeably unbelieveably stupid of Satoru.