The best place to start would be with the end. When this episode ended, we already knew that the show has been green-lit for another season. And while you could say that the show definitely ended on a cliffhanger, but I actually think if the show had ended here, then it’d have been terribly climactic (yes, you read that right, climactic, not “anti”).

Why? Because Bon’s arc has been about giving everything up for the sake of rakugo, and here it is, how he’s not going to leave anything behind him, unlike Shin who gave up on rakugo and will have both his bloodline and his rakugo continue on after him. One could understand why he looks at his beloved younger brother with this soft and rueful smile, that the dead will live on, while the living must die out.

Speaking of Bon, or should we say, Yakumo, we should take a look at this episode and cast our minds back for how things have gone for him this way, and in the end, this tragedy is of his own making. He saw it coming, he knew it’d come, as it kept on happening, but he let it. The single aspect of his life that most affected his behaviour and personality has been his fear of being abandoned. So what does he do when he has to take care of a 5 year old girl? He doesn’t let her harbour these thoughts that she might be abandoned as well. Oh no, he flat out tells her to do as he tells her or he’ll boot her out.

Of course, he later tells Matsuda that Konatsu has never listened to what he told her. And what does that say? It says that she’s grown to know that adults’ words isn’t worth anything, and that’s if she’s lucky. And she in turn knows he can’t abandon her, because he already has, emotionally. This was brought over in the scene between Yakumo and Matsuda in the cemetery, where Bon expresses surprise over Matsuda’s anger, who says it was only natural, becauseshe’s like a daughter to him. This mirrors the scene where Bon came across Shin and Miyokichi embracing, and she beseeched him to get angry, because anger shows you care. But Bon has no anger for Konatsu, because he’s never truly cared, never truly seen her as his daughter.

Bon, now Yakumo, spoke of how he no longer remembers his true name. Not “old name”, but “true name”. And he keeps his litany of being alone and “not changing“. But hasn’t he changed? Isn’t “President” another name, which is to say, another mask for him to adopt? The lack of change he speaks of is that he’s withdrawn from the world, he’s abandoned it. Now that it doesn’t have the people he care for. And as he’s found out in his first successful performance, if you don’t let people in, then they won’t take you in either. He’s left looking from the outside in, because he can’t accept any other life. 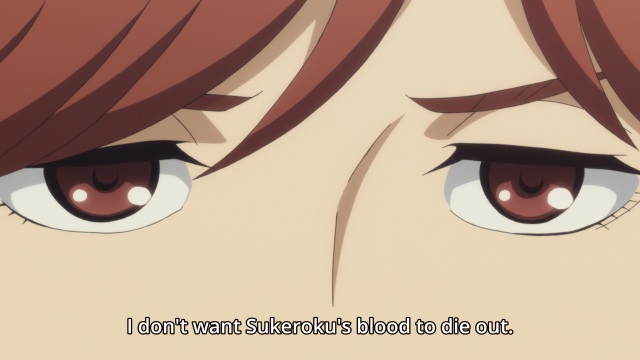 And now it’s time to speak of Yotaro. We didn’t see all the hard work he’s put in, but we’ve seen it through the tale of Shin and Bon, Kikuhiko and Sukeroku. He’s put in hard work, and he’s such a dork. He’s much more of a Sukeroku than Shin ever was. “Rakugo is a dialogue with the audience”? He’s literally having a discussion with them! For all that Shin was an incorrigible womanizer and joker, he’s had a sense of gravitas and seriousness, which Yotaro lacks. He really did become his namesake, a fool, free as a bird. Except for his relationships, which he seeks, and the responsibility inherent in them. Which means he’s not free at all. But he’s happy for it.

This happiness, this living life in the moment, this is what led to Sukeroku living on, and to the one who lived on and who received everything he asked for to lead life riddled with regrets and overflowing with loneliness, because that is the fate of becoming Yakumo. That is the fate of living on past your time.

Also, that Yotaro, after they cement him talking to the audience? Having him talk to us? That was a nice touch.

And now, some words on the show, but first, something that’s mostly related to this episode and the previous one – Kobayashi Yu, the voice actress who voices Konatsu is a good voice actress. I really liked her performance in the first episode, and the latter half of this one. But she doesn’t at all sound like a child. Her child-Konatsu clearly sounded like an adult making a fake sound, and it grated. More than that, child-Konatsu had some very dramatic lines to deliver, and Kobayashi having to “act the child” meant she couldn’t fully act-out the drama, so almost any scene where we’ve had child-Konatsu fell flat as a result. Usagi Drop, Barakamon, and Mushishi have all used actual children to voice their child characters, and Rakugo Shinju should’ve learnt the lesson.

Ok, now about the show as a whole. Rakugo Shinju isn’t a very good show, it’s a great show. But it has a flaw that makes me not love it, which I discussed at some length in last week’s write-up: I’m not emotionally moved by the show. I can’t bring myself to care, emotionally, about the characters. This is pretty similar to criticisms such as one could bring against Shin Sekai Yori, but the difference is that SSY works on a plot-level alone, and with its themes, and even if you don’t care for any of the characters, it’s still a show that “works”. Rakugo Shinju is a tragedy, and a lot of it relies on you buying into the characters and their fates. While I can accept the show is well-told, and everything is great, I can’t really care. And for this show, it’s somewhat of a death-blow.

Now, I can understand it working for others, and it’s similar to discussions on Madoka Magica – I don’t scoff when people say they couldn’t relate or care for the characters, I just nod as it has me understanding why they don’t care for the show as much as I do. Now, if we discuss “Why?”, it’s actually somewhat interesting, from a show-criticism perspective, and to better understand our (my) interaction with the media we consume. A large part of it is the meta-narrative structure, the sheer theatricality. Quite often, and especially in last week’s episode, the characters appear grander than life, as if they’re reciting lines in a rakugo performance, and the back-and-forths they hold does feel straight out of one. It fits the tone of the show, but it means I don’t feel as if they’re “real characters”, but as if I’m watching actors, so the relationship is relayed, rather than direct.

And then there is the part that a lot of symbolism and character growth moments are held instead within rakugo performances, most of them, with the exception of last week’s Nozarashi, are quite symbolic and not so clear. But still, all of this adds up to the atmosphere of watching actors on stage, rather than characters, and it’s harder to care for actors, or puppets, when you keep seeing them, rather than the masks they wish you to believe are real.

But, it’s an exquisitely-made show, with memorable rakugo performances, beautiful shots, and which deals with many themes any creative person can relate to. In addition to having a cast of characters that even if their delivery feels less than real to me, all reflect actual issues and are fully-realized from a strict writing perspective.

Rakugo Shinju is a great show, but it’s not a show I love. I’ll definitely watch the next arc, and maybe now that we’re done with the story of Yakumo and Sukeroku, it’d have a lot more time to dwell on the small moments of life, on the tiny moments of characterization. I really want to love this show, but until I do, this is a 9/10 show that I’m docking a point to for an emotional void. 8/10, would highly recommend to people.