Well, it’s been a while since our last “Things I Like” post, so now we’ll cover 07-Ghost, a new anime that just ended its first, 25 episode long, season last week. It’s a slow-moving series, based on a still-running manga, but overall, it’s worth it. 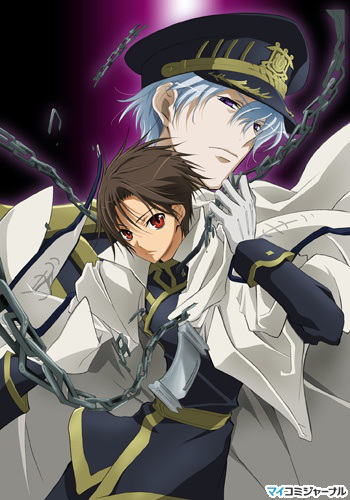 Protagonist and antagonist of the show.

This is a “Things I Like” post, and as such, it’s not a review per-se, but my thoughts on the series. Spoilers should come as no surprise, but this post will have relatively few if any.

This show is slow. I mean, really slow, at least in the beginning. I’ve begun watching it after 7 episodes or so were out, and after finishing them went, “Erk, this is how far we’ve got?” and checked Wikipedia. Sure enough, I found out this anime is based on a still-serialized manga series, and I thought to myself, “Ah! It’s going to take 30 episodes whatever it should take them 10, because they don’t want to catch up to the anime….”, just like Bleach‘s first 15 episodes were awesome, with Ichigo growing in power exponentially, and then I expected the Rukia-saving arc to be 5 episodes, 10 tops… and it took some 60 episodes, yeah.

Well, fear not! That’s not what they’ve done.  Luckily, they’ve had 25 episodes for the first season, and next year we’ll get to the next season. I’m going to give you a little spoiler here: I thought they’d leave the church by episode 6, and then at episode 9 I was surethat Teito, the protagonist of the show, would leave the church. No; it only happens at the end of episode 25, the season finale.

I’ve actually went over the episode’s list on Wikipedia, and it seems like each episode progresses the story by quite a bit. It’s true, but in a way, it’s the feel. The laid-back and slow feel of the show. And of course, that in how things stand in the show, even if quite a bit happens, things end up more or less as they were before, in the world.

That is to say, that the episode begins in a certain place, and none of the characters had changed locations during the season. Whoever is stuck is still stuck, etc. What does happen is that you gain more and more insight into the feelings and relationships of the characters. But that too is done in a very slow manner, which if you manage to sit through, ends up worth it, as you’re exposed to the characters over enough time and in a manner that doesn’t feel forced. But it can still be tiring, and I’m not sure how people who watched it only one episode a week got through it.

Around episode 15 I felt things begun to pick up, with Teito actually growing, and information being gained faster, and having more impact on us. If you watch the show, tell me what you think, or whether I imagined it all, either the slowness of the first half, which isn’t truly an exposition as quite a bunch happens, or that it picks up later ;)

The OP of the series is quite good. It is called “Aka no Kakera” by Yuki Suzuki. The art is crisp and clean, and reflects how things look in the anime (I like how “Zaiphon”, the magic inside the series looks. Words whirling around the caster, and the words carry the caster’s thoughts and emotions), and yes, the long limbs remind me of CLAMP some.

The music is upbeat, it’s energetic and vibrant, a good action music. You can really see how it’s a good and fitting song when they play it around episode 24 or 25 inside the series, and it fits everything well. The lyrics of the song, though it might take you some time to realize all the ways in which they fit, are also a success: They fit the show! Both its feel and the things in it.

Each episode also begins with several (church-)bell chimes, and a short sequence from the episode to come. I’ve grown fond of the quite loud toll of these bells, and the accompanying Death-God picture.

The second thing about the series is its amazingly high Bromance Factor. For those who don’t know, that’s basically a non-sexual “Man-love”. Or if you will, they are all “Gar for one another” (No, Archer is not “Gar”, that’s the wrong way to use the term, you are “gar for X”). The show has mostly three women, aside from the mermaid, and these three have so little air-time that I couldn’t really separate them if my life depended on it. They have different hair and eye-colours, but since their hair is hidden it doesn’t help much.

No, what you’ve got are boys, lots and lots of boys. You have Teito and his best friend, and then you have Bishops Frau (a no-good pervert, but later we find out he’s more, but always a pervert), Castor, and Labrador, we have assistant Archbishop Bastian, we have Hakuren… yes, it’s all about boys who tell one another they love one another, who are bishonen and soft (and can still kick your ass) or manly and boisterous.

And of course, it’s a veritable heaven for slash writers, or any of those who write fics about male pairings. The possibilities are endless. I can also see the relationships between Ayanami (the antagonist) and his subordinates, and between his subordinates. It is actually implied in some ways in the anime. Not to forget, the childish Kuroyuri whom we don’t know whether is male or female, and one of the characters in the series actually asks ;)

There are some annoyances in the series, aside from the slow pace which seems to pay off later, mostly with Teito’s “memory sequences”. You see, Teito had his memory sealed off, as he had witnessed some traumatic things as he was a child. We see both his dad and his “Father”, a bishop in a church who took care of him. Did his dad die before he was given to Father or not? Are they the same person? A lot of it is unclear in the beginning, and not just because it’s unclear to Teito. If you speak Japanese it’s probably easier, as you can hear him say “Oto-san” and “Fatheh”, rather than read it in the translation. And they look similar (due to drawing style of basically all characters), and how we see the memory sequences with coloures washed-out. It’s kinda annoying, and you might need to read in the wiki later to organize who died when, father-wise ;)

Plot-wise, the series doesn’t really give us anything new under the sun. Lost-heir to the throne, evil god must be kept from resurrecting, corrupt military, sanctuary with the church… but you don’t suffer watching it.

The ending’s best part, which you miss here, is that the music begins about 10 seconds earlier, during the anime, leading nicely to it. It’s a calm anime of the usual sort, though it’s a bit more rueful than the usual “soothing” kind. I don’t especially care for the slightly upward turn it takes during the middle, and would have preferred it to remain as rueful. Of course, there’s not much interesting animation to speak of in this ending…
The ending fits the anime pretty well as well.

The voice-cast is pretty neat, and has quite a few members of the Espada (and others) from Bleach. Mikage’s Seiyu is Daisuka Namikawa, who portrays Ulquiorra; Labrador’s seiyu is Koki Miyata who does Hanataro Yamada (the funny and shy healing squad member); Frau’s seiyu whom you’ll grow to enjoy is Junichi Suwabe who portrayed Grimmjow Jeagerjaques; and of course, the main antagonist, Ayanami, is portrayed by no other than Sho Hayami, who also portrays Sosuke Aizen, the lead antagonist, in Bleach.

You also get Fukuyama Jun as Hakuren, and the more unknown Mitsuki Saiga portraying the main role of Teito Klein, who has a slightly annoying personality ;)

The music which was a bit much in the beginning grew on me, and provided a nice atmosphere.