Valvrave the Liberator, known as Kakumeiki Valvrave in Japanese, is an anime from the previous season which I’ve quite enjoyed, and then episode 10 came along. This post will contain spoilers of the complete first season and also contain discussion of sexual assault, for those who need the heads-up. The main reason that this post is not even attempting to be a review or cover multiple ideas from the show is that it feels to me that the show had been designed as a single 25-26 episode run, but had been cut into two parts due to logistics, and it’d be akin to attempting to review the first 8 episodes of Code Geass as if they are indicative of the whole show. 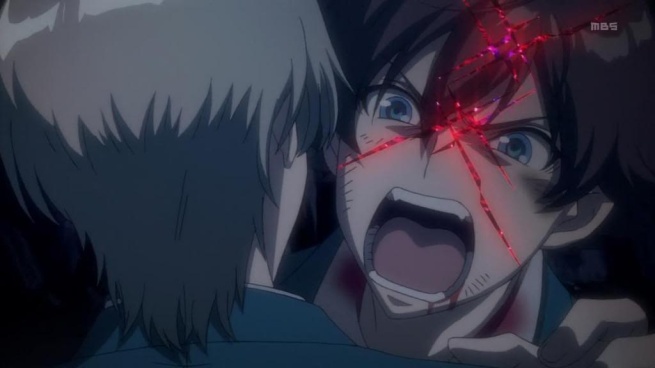 This specific post is going to be filled with stories, rather than merely my analysis of the show, the episode, and things within it, and I think it’s appropriate. Valvrave the Liberator is an episode that comes out Friday morning my time, I used to wake up and watch the episode. The week episode 10 had come out had been no different, I watched the episode, then I went online and read some discussions, and then I had to go and lie down because I wasn’t feeling well, as a result of watching the episode, and had to take some time to recover.
I’m known as someone really into anime in several circles I frequent, including Europe-West’s Dominion playing population. A couple of weeks after the episode aired someone I know watched the episode and asked me “WTF?! WTF?! Did they really do that?”, which is a good account of someone’s experiences.

So, what did we have in that episode that was so surprising, that the whole of twitter and reddit blew up in massive discussions, spoilers, cries of excitement and surprise, after this one episode, which also made some people drop the show (including after hearing about it but before watching it)? Well, we’ve had the main male character rape another main character in the show.
Having the main character of a show rape someone, especially on screen, is something that I can only think of happening a tiny amount of times, A History of Violence maybe, and in Lord Foul’s Bane, the first book in Stephen R. Donaldson‘s The Chronicles of Thomas Covenant, and of course, in Oz, but that show was all sorts of fucked up.

I don’t know if this is the reason it affected others so strongly, aside from the nature of the act itself, but part of the reason it affected me was that I totally didn’t realize what was going on, which is tied to some of the background of the show – the main character is host to an alien intelligence that sometimes takes over, earlier in the show it had him bite someone in order to take over their body, for the duration of which their consciousness had been dormant, until he returned to his own body. As such, when we saw his eyes glow which meant the alien presence took control of his body, and he clawed Saki and tore her clothes off, I was actually not-bothered (which goes a long way to show how inured we are to physical violence), I was expecting him to bite her, take over her body in order to feel the presence within him, and no harm done, right? But as I watched, and kept watching, I had to at some point realize what had gone on, and it came as a complete shock to me, and I didn’t enjoy that feeling.

Now, quite a bit of the discussion following the episode discussed things such as “She wanted him to be with her,” and she acted as if nothing happened immediately after, and even “forgave” him the very next episode, all true, which coupled with the fact it wasn’t him controlling his body should’ve made everything fine – but even if Haruto didn’t rape her, she’s still been raped, and I was very close to dropping the show then and there. In the next episode, Haruto asked Saki to marry him, and I’m glad she turned him down – accepting the offer, accepting Haruto’s guilt would’ve sealed her position as the “Tragic Heroine”, whom we’re supposed to pity for being with someone who doesn’t truly love her. I’m glad she turned him down.

My final point before discussing a more general point about all of this is the tasteless humor online following this episode, which to me sounded like “HAHAHA! I can’t believe it!” – in High School we’ve had some lectures about humor, and one of the take-away messages was that we use it as a defense mechanism, against things that worry us or make us uncomfortable. I want to think that the brittle and somewhat shrill nature of the humor was just people online trying to defend themselves against the deep discomfort this episode had engendered within them, but maybe I’m just too kind. (I did find people saying they’re sorry for Shoko, the childhood friend and romantic interest of Haruto utterly perplexing.)

Vampires as sexual predators, blood-drinking as a metaphor to sex, vampires as highly sensual and sexual beings, these are definitely “a thing” in the past couple of decades, but if you ask me what vampires are about, it’s about invasion. A power that involves taking over others through a bite (and vampires being hypnotic) is deeply vampire-esque. That’s why Berg-Katze in Gatchaman CROWDS who can kiss others in order to assume their form and wreak havoc, who is also androgynous, tall, and “dark” is also one that gives off storng vampire-vibes, it’s about invasion, and especially sexual.

Thinking of vampires as avatars of invasion really makes one wonder about their aspect where they must be invited to enter one’s home (which obviously screams – “Don’t let strangers into your house.” and “The evil in our lives is the one we’ve invited there.”), but that made me think of Christie Golden‘s Ravenloft novel, Vampire of the Mists, where Strahd von Zarovich, the feudal lord and vampire of a village in Ravenloft owns the serfs who serve him, and he also owns their houses, so he needs no invitation, and in fact can invite another vampire into the abode of their powerless victims. Invasion, didn’t we say?

Valvrave has these kids take over others’ bodies by biting them, we had Saki, the sole female Valvrave pilot take over Haruto’s body in an early episode and make very strong advances on another girl while they were alone in an elevator, which some would say crossed the line into sexual harassment, especially if you take into consideration the reaction Ninomiya Takahi, the one on whom advances were made, had the next time she met Haruto.
Episode 10 as well, had really shown us that this is the direction things are going – we have the three boys who pilot Valvraves discuss taking over a girl’s body in order to “check it out” – now, they did seem like they were joking, but the connection between their newfound powers/affliction and sex had already been established.

And then there’s the simplest of explanations, and why Sword Art Online had also gone for “Sexual assault as strongest signifier of villains” on two different occasions – they wanted us to really realize in no unequivocal way that their “powers” really are a curse, and that them signing a contract to give away their humanity isn’t just for show, and since “killing” is something we’re inured to and they do in order to defend their friends, well, sexual assault is the “easy way” to give it to us.

3 comments on “Valvrave the Liberator In Light of Episode 10 Discussion – Vampires are About Invasion?”