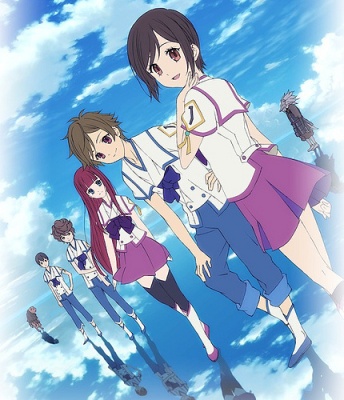 The main cast of the show – there is no one picture to capture the essence of the show.

Shin Sekai Yori/From The New World is a show from last season. While it was airing some people have suggested I watch it – I looked over the plot synopsis, I looked over the synopsis of the first 6 episodes, and apparently very little happened, so I didn’t watch the show. Then while looking for something to watch, I’ve decided to watch this show. And am I glad that I have.

(I’ll cut to the chase – you should watch this show if you feel like watching a really good show, with a good and thought-provoking story, so long you don’t come just for the action.)

I’m going to try to avoid spoilers in this post, because part of the fun in the show is having things revealed to you/trying to figure them out on your own – but the reason I don’t mind not having spoilers in this post is the same as I don’t think spoilers will ruin this show – there are no real “Getcha!” moments in the show, the strength of the show, of what is discussed is in you thinking about it and hopefully having a nice discussion with others about it. The “reveals” in themselves don’t command power, which makes them worthier, not less – there’s actual content and not just a bright flash meant to dazzle us.

This show is based on a book. Not a light novel, not a manga, an actual book, and you can feel that it takes its time to develop things, that it has a different pacing from many of the other shows released in recent years. As such, it’s less surprising that an actual Science Fiction story, not just Science Fantasy or another fight-show with futuristic trappings is book-based.
It does have a place or two where I felt the pacing was a bit off, such as something taking half an episode or one episode longer than it should have, but in retrospect considering how much it affected the rest of the show it could be warranted, even if the pacing is still awkward (the early rat segment).

The setting feels very rustic, as this is a post post-apocalyptic setting, a thousand years in the future, after psychics have destroyed the modern world by going on a rampage. In the show everyone seems to have psychic powers and is living in an idyllic countryside setting. After the opening segment of mass destruction this is more than a little disorienting.

The show is full of such moments of disorientation, where things feel not just right, where things aren’t as expected, where you go “But this contradicts what I’ve been told earlier…” – this is done on purpose, and is done well – you question why things happen and later in the show, perhaps even much later you’re given an explanation. And if not, feel free to ask around and it’s likely someone will have an answer for you.
For instance, when the characters hit 14 or so, I was a bit critical of the nature of their romantic relationships, because they all were the way they’ve been – it felt forced, it felt fake. And having asked around, someone said that it makes sense for them to be manufactured this way, the relationships, for reasons that you can see in the show’s ending conflict (the reasons the ending-conflict came about were something I realized were the true reason a certain stricture had been set on some characters).

Now, there is one big plot-hole in the show, and there are a couple of “Huh? Why did they do X when they could’ve simply done Y which would’ve been simpler and saved everyone all this mess?” – but these do not affect the questions the show raises, nor the emotional weight that you can find, and have more to do with some plot-structure and the structure of the world.

I definitely sense some “Return to nature” themes in the show, or “Look at how we affect nature and the world,” this is more pronounced since the “False Minoshiro” we meet early on makes the sound of  the tree-spirits from Hayao Miyazaki‘s Princess Mononoke, and the way its body operates is akin to the Night Walker’s from the same movie.
At some point we supposedly are given the theme of the show – the fear of adults of children, something you certainly can feel in some Japanese anime, but I think it’s the reverse – the fear children have of adults, who curtail and control their paths through life, even as they are forced to make the very same decisions later on.

Conclusion:
I will score this show 9.3/10 sci-fi thoughts. This show is a masterpiece, but it is just short of perfect.
While I liked the cast, and the voice actors all do a good work, and you certainly feel like you get to know the characters as they age close to 30 years in the show, I never felt truly wowed or close to them.
While the animation is top-notch, and the music is mostly serviceable and doesn’t get in the way too much – things can’t be faulted, but they don’t bring you above and beyond what you expect them to – they do their work, very well, but that is all they do.
To put it another way, it is one of the best anime I’ve seen, but it’s not one of my favourites, the two are not the same thing.

The show has many themes, and if you ever watch an anime in a “Book Club” form in order to later discuss it with other people, this is probably a good show to do it with.