After fielding a whole bunch of questions on my blog, and seeing the same questions pop up on reddit, MAL, Crunchyroll, and even a Russian forum that linked to my blog, I thought I’d try to tackle some questions about the scene in the second half of OreGairu season 2 episode 8. I’m not trying to convince you it’s “good”, or that the characters are “right”, but just try and explain the what and the why.

I haven’t read the Light Novel, so this is all based on my read of the show on its own. You can read my massive notes for episode 8 here if you so desire, or check here for all my writings on the second season.

1) You think Hachiman is miserable? But he’s the batman, and he’s cool, and society is wrong, isn’t it? 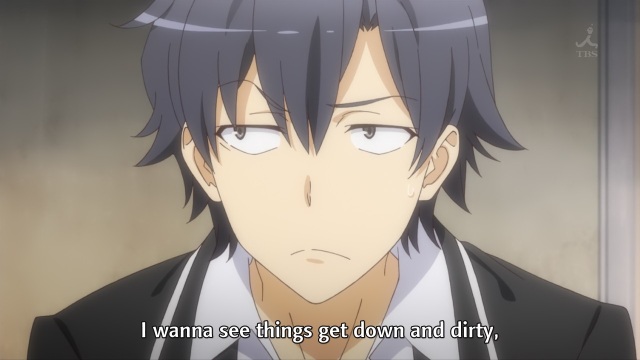 This question is more of a preamble into the mood of the entire FAQ. I’m not actually interested in giving value judgments on whether the characters are “right” or “wrong”. I’m trying to explain how they see the situation, and whythey are having problems with it. I mean, we sit here outside, some of us with years of experience more than the characters have. Whether I think Hachiman’s goal is right or wrong doesn’t mean much to answer the question, “Why does he try to change his methods?” And the answer is Hachiman is miserable, and was keeping this loner personality as an act to help him keep people, and his own emotions, at bay. He himself says he’s lonely and that his actions only isolated him further, while hurting those around him under the guise of it not mattering.