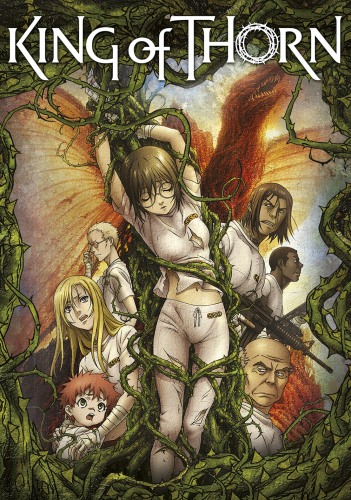 King of Thorn (Ibara no Oh in Japanese) is a well-produced movie. It in many respects didn’t remind me of anime (series), but of western films. The plot in particular, which is a death-game meeting a mindscape film.

At a pretty early stage, I saw resemblance to the 2009 film Pandorum, and also to 1997’s Cube. Later on they actually reveal some of those similarities, at least to Cube aren’t superficial, when Alice speaks of how the whole way the event had been orchestrated was so specific people would survive, so Kasumi could make it out – the dangerous criminal, the leader-cop, the nurse who takes care of the helpless oracle (the child), and of course, cannon fodder, along with someone who possesses internal knowledge to get them started on their journey.

(This is a “Things I Like” post. It’s slightly more “reviewy” than usual, touching on the themes and production, rather than exploring them in-depth. The 2nd half of this piece tries to explain the ending, the “mystery”, and also elaborate on character-motivations. Full-film spoilers ahead.)