Still busy with real life schoolwork, but here’s what I think of the past two weeks’ worth of anime episodes I’ve watched. Still need to catch up on Sidonia, but hey, we watch what we can! Some stuff was great, and some stuff was terrible, that’s how this season is.

Episode 8 was the dramatic core of the entire show up to this point. This is the big conflict everything was building towards. Hachiman overcoming his biggest enemy, his fear, his own self, and comes right out and declares to his friends, to the world, and to himself, the truth he’s been hiding from – that he’s scared of being alone and not understanding others, and that it hurts. And his friends hurt because they suffer from the same issues (Yukino), or because their friends are hurt (Yui). We also had a chat from Sensei where the author took time to explain to us how relationships work, how hurt works, and that once you grow past something that seems all consuming, it doesn’t seem nearly that bad. The author also explained almost every character in that scene, from Tobe and Ebina, to Hayama, to… everyone.

END_OF_DOCUMENT_TOKEN_TO_BE_REPLACED

I’m sort of busy right now in real life with many assignments being due for school (ah, the grad student life), so there might not be an overview next week. Well, with how I’m feeling about this season, maybe it is for the best. 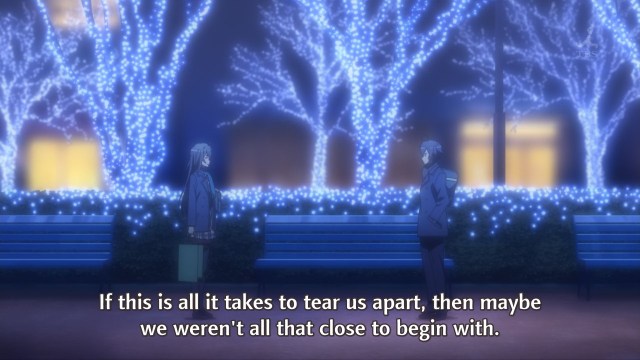 This was an interesting episode. While it didn’t have the high drama of episode 2 with Hachiman’s self-sacrificing fake-confession and his friends’ disapproval, nor Hayama and Haruno’s scenes with him in episode 4, outright calling him a “Monster of Rationality” or telling him to stop sacrificing himself, but this episode might have been more powerful in its quiet moments. This episode shows us the results of a season and a half of Hachiman trying to grow, of admitting how much it is a mask he’s maintaining, and how he’s ready to admit it’s not the best thing for him or those around him.

END_OF_DOCUMENT_TOKEN_TO_BE_REPLACED

Mid-season of the anime season of Spring 2015 is upon us, so time to round up how I feel about the shows I’m current on, or decided to put on hold. A round-up telling you what I think is worthy of your time, or not, and where it’s at. This season I decided to pick up less shows than usual, and hold off what I expected will be “averagish”, so let’s see how it panned out.

If you keep at things for long enough, things will boil over and drama will ensue. The light atmospheric comedy of the first season is rarely seen, and instead Hikigaya Hachiman is brought to task over the way he “solves” things. It’s as if the finale to the Cultural Festival arc was stretched into an entire season. Yes, Hachiman is still allowed to perform his “cool martyr” act, and people who really want to can still believe it’s everyone around him who sucks, but the show, and Hachiman know it’s he who suffers. A very sharp take on human interaction and loneliness. If you liked the first season for “cool Hachiman” and the more standard RomCom antics, you might be disappointed, but otherwise? Pretty great.

END_OF_DOCUMENT_TOKEN_TO_BE_REPLACED

A lot of words spent on how things don’t always work for me this week. OreGairu worked, Ore Monogatari did too. It’s something about “My” (Ore), I guess. More seriously, aside from stand-out moments this week had a lot of moments I enjoyed, even as most episodes were underwhelming.

This has been the show’s weakest episode this season aside from the very first one. It also means it was stronger than all but one episode in the first season, and stronger than most anime episodes out there in general. Just like every other week, I wrote a full episodic-notes post for the episode, where I break down all the interactions. This episode in particular had several moments of interest, and of hope, and then despair.

END_OF_DOCUMENT_TOKEN_TO_BE_REPLACED

Another week, another batch of episodes. Going to be shorter about most this week, as I’ve wasted some time elsewhere. Some shows are finally “starting”, while most others are going as they did before, for better and for worse.

Another episode of OreGairu S2, another monstrously long and in-depth breakdown by myself? You don’t say! I might have gone overboard, as I think this is my longest episodic write-up to date. Just like with NagiAsu back in the day, breaking down social interactions is interesting. It’s something we all live and breathe in, and take for granted, so supposedly it shouldn’t take much space. But, there’s nothing that’d take more space were you to actually break it down.