Mahou Sensou (Magical Warfare), Mahouka Koukou no Rettousei (The Irregular at Magic High School), Fate/Stay Night: Unlimited Blade Works, Fairy Tail 2014, Gokukoku no Brynhildr (Brynhildr in the Darkness). This year had a lot of shounen shows which made me realize some things about how I watch these shows, and what I think of them. I still like these shows, or I wouldn’t watch them, I always have high hopes, and sometimes they are met, such as with Hunter x Hunter, or even Tokyo Ravens, but more often, I realize I’m not enjoying these shows as much as I wish to, and as much as I once had. It didn’t help most of the shows mentioned earlier were either outright bad, lacking, or just lacking in a certain way. 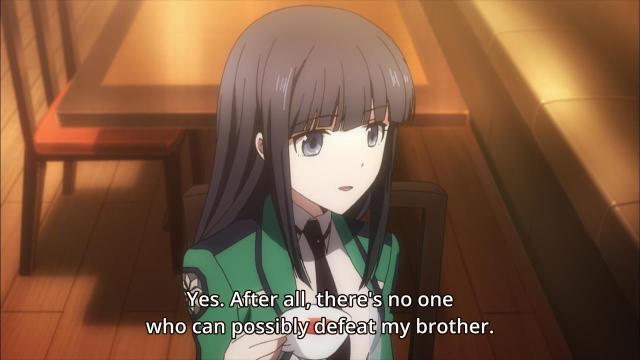 This realization actually started more towards the tail-end of 2013, with shows such as Unbreakable Machine Doll and Strike the Blood, but back then I ascribed it to the bad art and over-reliance on fan-service, in part. But it’s more than that, it’s also more than just me being too old and tired of these shows (my love for I spoke of before, more than once) – it’s the difference in how I watch them. Shounonsense (the female version would be “Shoujunk”, thank you AniTwitter) often just don’t have enough happen every episode, and you need to watch several episodes in one go to get anything out of them, and hopefully think slightly less on the episodes as you go, which my note-taking interferes with.

But no, some of the aforementioned shows are definitely not up to snuff. END_OF_DOCUMENT_TOKEN_TO_BE_REPLACED

Anime Power Ranking is no longer held, so here are the shows I’ve watched this past week and how I order them. Each link leads to my episodic write-up of the relevant show. You will notice half the shows do not have descriptions, these appear in this post, covering the Sunday-Wednesday shows, while this post describes the episodes that aired during the latter half.

Now, I have too many shows, so I’m going to be dropping shows each and every week until I’m fine with the amount of shows I have left, so keep reading for summaries of new shows, how the shows stack up against one another, and which shows had been eliminated!

END_OF_DOCUMENT_TOKEN_TO_BE_REPLACED

A new season is coming up, so once more I look at the incoming listing of anime and choose what to watch next. The list will cover how likely and what form of write-up I’ll give each show, and how interested I am in it currently. I mostly went by random internet chatter, RandomCuriosity’s preview post, and the Neregate’s chart, I don’t really watch previews, which bit me in the ass with NouCome/Yuushibu last season, so let’s hope we don’t get a repeat this season.

I’ll give my current opinion on the shows that carry over. Show-names with a means I don’t plan to pick the show up, but wanted to discuss it. Interest scale is out of 3 stars.

Nobunaga the Fool – Sci-fi, over the top historic figures who fight, an anime-original which always is promising… I’m so ready. Also made by people who make good-looking shows.
Interest Rating: 3/3. I want this.
Write-up Potential: Dunno how far they take the ideas, post-episode notes with a chance of being upgraded.

Space Dandy – This show has hype riding in its wake, with Watanabe Shinichiro who is best known as the director of Samurai Champloo and Cowboy Bebop at the helm. The show seems to go over-the-top, with a womanizing, alien bounty-hunter dandy-man at the helm. It seems really weird and over-the-top, so it could really go anywhere, but we have to trust in Watanabe.
Interest Rating: 2.5/3. It has hype surrounding it, it has pedigree, but it’s weird, so we’re going to have to see where it goes. Anime-original as well.
Write-up Potential: Potential for in-depth episode write-ups, but it’s always nicer to watch a spectacle without pause, and this is going to be a spectacle.

Buddy Complex – Sunrise, the studio behind most mecha, returns for another mecha story, about clashing super-powers and the power of friendship. Looks interesting enough.
Interest Rating: 1.5/3. Will give it two episodes.
Write-up Potential: Post Episode to not at all.