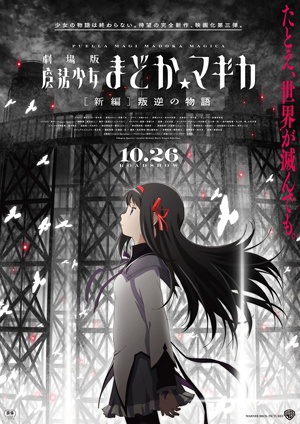 Last week I’ve finally had the chance to watch the long-awaited Puella Magi Madoka Magica movie 3: Rebellion, known in Japanese as Mahou Shoujo Madoka Magica: Hangyaku no Monogatari (Story of the Rebellion). Wait, what?! Third movie? Where did that come from? That had been my thoughts when the third film had been announced.

The first two movies are a recap of the 12 episode series, with better visuals but a worse story – they cut on some of the nuances, the nuances which are all that give the third movie anything to stand on. I strongly suggest watching the series instead of the film, it’s only 40 minutes longer. The story told within the series and first two movies is complete and self-contained, so much so that Madoka Magica is a series I consider to be one of the best anime series I’ve ever watched – everything tying up thematically plays a large part of it.

When the film had been announced, as true fans of the series, many of us had been excited and curious to see what the new film will bring about. Curious, and filled with a slight sense of unease, that the film is “merely” trying to make more money, and is nothing but fan-service. A few months ago the movie had been released in the states and opinions had been divided between the movie being great, the movie being a fan-service-directed money-grab, and opinions thinking that both are true.

(I’m going to spoil the entirety of the Madoka franchise, from the series to the third film, beyond this point.)

END_OF_DOCUMENT_TOKEN_TO_BE_REPLACED

This year I had watched the Rebuild of Evangelion: 3.33 You Can (Not) Redo film, which I’ve been eagerly awaiting since the 2nd film ended. Well, you know what they say about expectations and how the greater the expectations, the greater the disappointment (or the enjoyment, as the hype carries us through the work without being able to treat it critically)? I think in this case how disappointed I was couldn’t be understated – my editorial-review of the movie is titled “You Can Not Redo – How I Wish You Could” ;_;

I mean, I should have probably seen it coming, this is Hideaki Anno we’re talking about. Last time he had a nervous breakdown/depression as his excuse though, this time there’s no doubt that this was intentional. And yes, I actively think he trolled us, and that might have impacted the harsh grade I’ve given the film.

You see, I’ve talked before of how movie tie-ins to series, not just continuations, but even adaptations often are made with the assumption you’ve actually watched the series in question – the characters lack depth, the interactions aren’t convincing enough – in short, they sort of assume you’ve watched the actual scenes and that the movie’s holes are “filled” with memories we have of the extended and missing scenes. Hideaki Anno played off of that. Big spoilers after the jump.