Fall 2014 is nearly here, and the season actually begins on Thursday, October 2nd (Terraformars aside). So time to see what I’m more interested in. this post doesn’t really focus on my “predictions” for how good something will be,  but is about my interest levels, on what I think will be interesting, and why. Shows that “didn’t make it” are usually shows I’m slightly less interested in, or find it interesting to remark on.

What do I think of the season? It’s the season of sequels or returning shows! Almost everything I’m actually excited for falls under that purview, from Psycho-Pass 2, to Log Horizon 2, and of course, Legend of Korra Season 4 (not anime, I know). Aside from that? Some seasons have no comedies, others have no action. This season has it all, the only thing I see lacking is romantic comedies, but between straight comedies and straight romances, I think most people will be satisfied.

As always, organized by days of the week, because I might pick a show on an empty day or cut shows I enjoy on days already overfilled with other shows. Order is by expectation within that day. Continuing from Summer, I’m cutting down on my coverage of posts with episodic write-ups, so only up to a couple of shows will get that.

Most of the information about the shows can be had from RandomCuriosity’s page, the helpful Neregate Chart, and what I’ve happened to see on various sites, such as The Cart Driver. Check them out if you want more information. 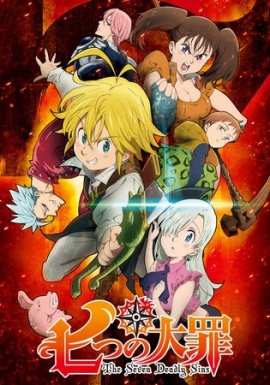 The Seven Deadly Sins / Nanatsu no Taizai – This looks to be a pretty standard shounen fantasy adventure – a group of super-powered klutzes who must be convinced to save the kingdom from tyrannical Holy Knights, with the usual shounen manga gag humor. It’s going to be a long-running shounen, so don’t expect any real form of closure. Directed by Okamura Tensai and series composition done by Suga Shoutarou, who between them worked on Cowboy Bebop, Darker than Black, Kannagi, Sekai Seifuku, Wolf’s Rain, Ghost in the Shell: Stand Alone Complex, and OreGairu. That’s impressive.
Interest Rating: 1.5/3.  I like shounen action, and the people behind it make it likely for this to be on the more enjoyable end of the spectrum for a sort of show I already enjoy, even if it’s likely to be “nothing special”.
Airing Date: October 5th. Preview.