Well, this was supposed to go out Wednesday, of last week, but I’ve been busy with all sorts of things. I usually split these mid-season posts into “Great”, “Good”, etc., but since things aren’t really looking hot in that aspect, I’m just listing them by how much I like them. Anyway, if you’re thinking of what to pick up at this point into the season, and I hold 5-6 episodes in is exactly when you know whether a show’s worth picking up, welcome to my corner, where my Good Taste Opinions™ will be dispensed.

Ushio to Tora / Ushio and Tora: 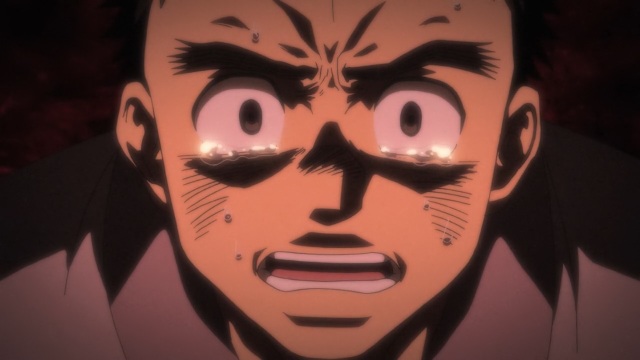 The last arc really delivered on the tears.

Man, this show sure is delivering. Ushio is cool, Tora is becoming more dere and less tsun, and together they kick ass. We’re seeing some elements of old-fashioned machismo, but even if the way the girls had been grouped was a bit eh, and the delivery at the end ran a tad too long, it was not only fun, it was emotionally touching, and this show really knows how to deliver emotionally touching moments, though mostly by pressing pretty hard on the tear-ducts, but the last couple of episodes had delivered slow and long-awaited pay-off. I’m enjoying this episode every week.

Episodes Watched: 20/26.
Current Rating: A-. Still not “special”, but a lot of fun, and emotional. This is what I’m looking for out of my shounonsense, though better animation would’ve been nice too.

END_OF_DOCUMENT_TOKEN_TO_BE_REPLACED

Last week I was busy. Thankfully, most episodes seem to have gone on in a manner that made talking about two episodes at once easier. Since I’m going to be very busy next week, the mid-season post will likely only appear next Friday.

As always, the list is ordered by how much I liked the episodes, combined with how good I thought they were, in a descending order (first is best, last is worst). It’s a bit less organized this time around, because it’s averaging two episodes’ worth of content, and not in any scientific manner. 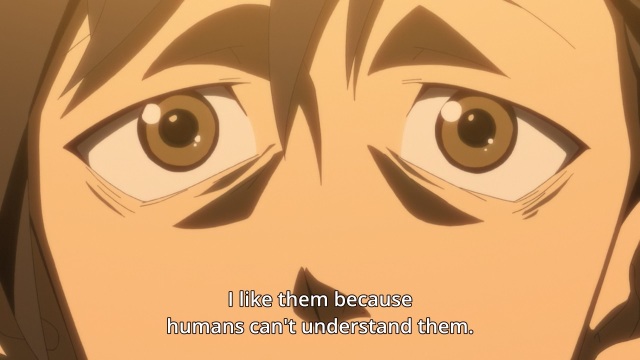 This series seems to have found its footing with episode 3. I can still see many people don’t and won’t like it, but in episode 3 it had shown what it wants to be about, and has been about it ever since, and also, well, more concrete, if you will forgive my pun. A two-parter, which continuing the theme of episode 3 is about our nature, about who we choose to be, rather than who we were born as. Kaiju, the great monsters of Japanese cinema, what are they here for? What are they to us? And especially to Jiro, and so we explore the questions of the monster within, media control, and tie it to the student revolts of the 1960s. It’s all about lies, and while the “theme” might appear to be with how those in power manipulate others, and even manipulate nature, it seems to all come down to the lies we’re willing to tell others whom we claim to love.

END_OF_DOCUMENT_TOKEN_TO_BE_REPLACED

All the premieres are behind us, and I’m sort of fine with this season. Nothing is really exciting me yet, and most of the crap had been left behind. I’m still unsure about a bunch of the shows, but it’s not like there’s much else this season to pick up. Slim pickings, but I’m fine with what I’ve got.

As always, the list is ordered by how much I liked the episodes, combined with how good I thought they were, in a descending order (first is best, last is worst). Numbers in parentheses are change from last week. 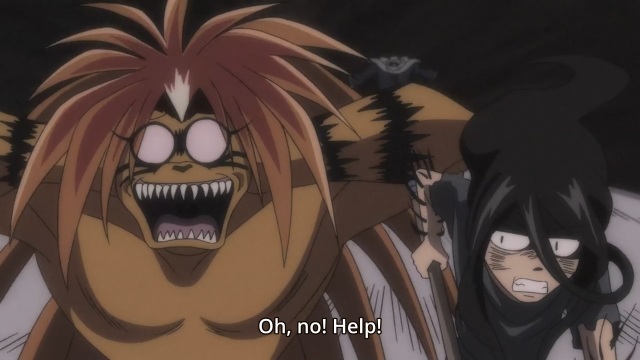 This was a pretty cool episode. It had Ushio being cool and saving everyone, and literally saying a man should come to the aid of crying women when he can, several times, which was a bit cloying, but there you have it with a middle-schooler (he’s literally chuuni) who was raised without his mother and told he should always act for the sake of the dead mother who’s watching over him. Anyway, we had cool action sequences, and self-sacrifices, and it was all gloriously shounonsense in the way I like best, with even the fanservice just sort of being there rather than being made a deal of, and Ushio and Tora being their usually cool self, and all the random monsters saying how great Ushio is.

END_OF_DOCUMENT_TOKEN_TO_BE_REPLACED

Three first impressions (Beautiful Bones – Sakurako-san, Perfect Insider, and Garo Season 2), and episode 2 of everything else. Considering last week I spoke of how multiple shows didn’t really tell us what they’re like in their premieres, let’s see how they did with their second episodes.

As always, the list is ordered by how much I liked the episodes, combined with how good I thought they were, in a descending order (first is best, last is worst). Numbers in parentheses are change from last week. I’m also going to give each premiere a couple of scores, “Premiere Score” for how well it did its job as a premiere, and “Episode Score”, for how well it worked as a regular episode. 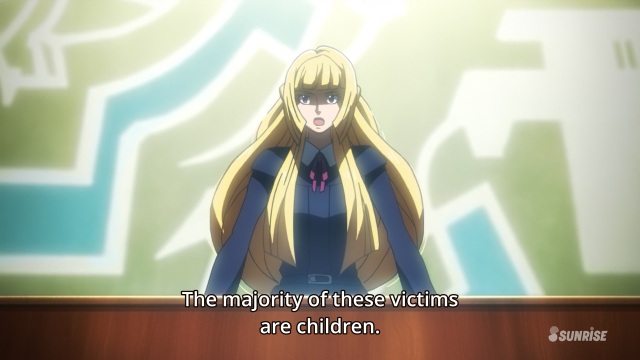 In case you missed it – THE MESSAGE is hammered at you.

Following a good premiere, Orphans delivered another good episode that did some serious job in fleshing out its characters, and was actually relatively subtle about its characterization of them, showing us how Mikazuki and the rest of the Space Rats lack either past or future, using their illiteracy both as a metaphor for their situation and as a possible cause of it. They do what they do not for anyone else, not to save Kudelia, but for one another, and because they have nothing else. They’re much lower on Maslow’s Hierarchy of Needs, but their self-respect still plays a part, as this is Gundam, and “villainy versus chivalry”, or “means well” versus “Doesn’t even try” is a very real theme.

END_OF_DOCUMENT_TOKEN_TO_BE_REPLACED

This is one of the shows I have higher hopes (if not expectations) for, seeing as it’s based on light novels that are closer to actual novels, and the premise, art, and everything surrounding it remind me of Hyouka, which is a masterful show when it comes to dealing with the small moments of human interactions. The preview made this show look very pretty. The director and vice director are inexperienced, so I’m going into it mostly blind. But seeing as it’s a mystery, you’ll all be pleased to know that the series composer worked on Mawaru Penguindrum and Yuri Kuma Arashi, so should be up to the task of handling potential complexity. 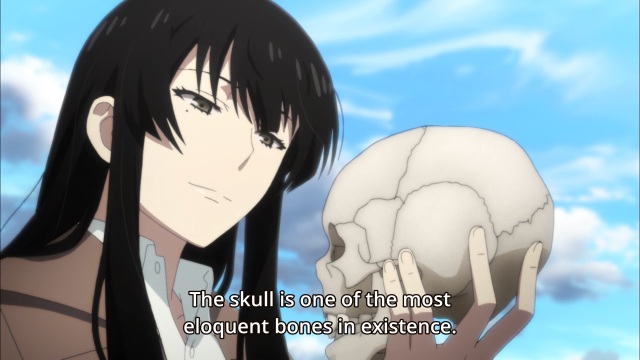 I thought before this show even began airing that it reminded me of Hyouka, and it might have caused me to find more similarities as I kept watching the show, but boy do I feel this show is trying to be Hyouka in various small ways. It’s really not a bad thing, just as Psycho-Pass trying to be Ghost in the Shell: Stand Alone Complex and paying constant homages to it wasn’t a bad thing, seeing as both Hyouka and Stand Alone Complex are two of the better anime shows ever made. But it’s there, and more than that, all those psuedo-poetry like lines, all those “so cool” line about how this world stopped moving, or the nature of death feel as if they try to appeal to a certain crowd, of which the protagonist Aku no Hana would definitely be a member.