So, the finale of the first-cour is upon us, and the second-cour was double-confirmed to begin airing in January 2015. The director or author of this show promised us this episode will end in a massive cliffhanger, but really, was such a promise necessary? Considering about 70% of the episodes ended in a cliffhanger or a twist (episodes 1, 3, 5, 6, 7, 8, 9, 11, and the rest ended on “Cool!” moments), it was sort of given that the finale of the first half would end on one as well.

So, we’re having a face-off, between humanity’s greatest hope (Inaho in the orange corner!) against the tragic and ironic Martian Rebel Leader (Count Saazbaum in the red corner!), and everyone else is just trying to survive. This is a fight for humanity, and for the survival of mankind, and justice.

Slaine keeps running around, always late to help people. So, if we want the episode to end on a suitably ironic and “ZOMG!” moment, we probably need something like Asseylum shooting Slaine, or better yet, Slaine shooting Asseylum, while he tries to shoot Inaho, or just join Saazbaum in order to backstab him in the second half. Let’s see how it goes. Write-up incoming.

Edit: Here’s a webm of the combination. It’s friggin’ 62 seconds long. Pomf.se is down, will reupload there later. 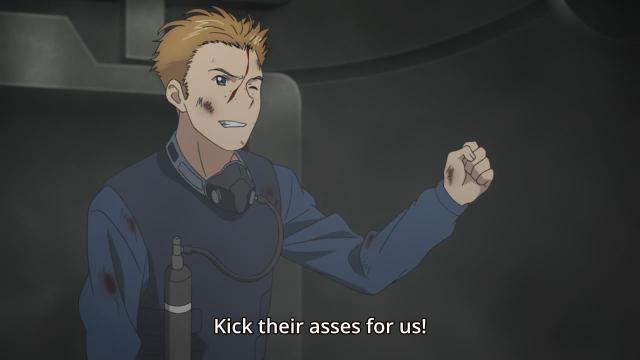 1) “The Deucalion? Why is it here?!” – The nightmare of those on the advance forces, who risk their lives in order to keep everyone back safe – to find out the rear had been made a front of its own. But if you think about it, that’s sort of a recurring theme in this show thus far, about how they’ve had to keep fighting on board the refugee-filled ship, about how their civilian homes had been destroyed immediately after they managed to escape. All of Earth is a front.

END_OF_DOCUMENT_TOKEN_TO_BE_REPLACED

Write-up this time is a lot more “observations and chuckling” than deeper content. Well, that’s what I was in the mood for.

So, Rayet’s choice was made for her by Inaho, who continues to be the one who gets to make all the decisions, including for other characters, and also makes the adults entirely redundant. But Slaine! Slaine finally got a break and got to make a decision of his own, but not due to his charming personality, just paying back for someone else’s act of saving Saazbaum. In fact, Slaine’s father is to blame for this whole war! “If only I hadn’t come to Earth!” said Asseylum, but if only Slaine’s father hadn’t saved Saazbaum’s life, eh?

Well, time for the last bastion of humanity and all of its death flags raised last episode to come under attack, though we have Inaho to save us! In Inaho we trust.

1) “I have to say, I didn’t expect them to make a move on this place,” alongside with “I thought this war was supposed to end.” That’s what happens when you don’t consume media, or read literature, you don’t know how death flags work, heh. Someone should make an anime equivalent of the Scream series.

END_OF_DOCUMENT_TOKEN_TO_BE_REPLACED

Count Cruhteo’s role in the story, at least thematically, appears to be over. He was here to make a choice, and that is how to react when he discovered the truth, of Asseylum being alive, would he go with honour’s demand that he save her and oust those who sought her death, or would he do everything to maintain honour, by going along with the plot? Well, he made his choice, and now he’s out. Poor Slaine keeps getting shafted just as each episode ends – being shot down, kidnapped, and having to shoot other people. Poor boy.

Asseylum is now working with humanity, and had gifted them a fighting chance, to go with their poker-faced military boy-genius, Inaho. Let’s see where they go from here, fighting the Martians, trying to bring back peace? And how will the Martians react? Tensions run high, and the plotters will foster the suspicion amongst those who might listen.

Screenshot album. Not 100% SFW due to the shower scenes.

1) A Villain and His Guest:

Hard to believe the pre-opening sequence was only 1:45 minutes long, considering how many mental turns I took there, and how packed it felt. I actually laughed out loud when it ended, and I think it could’ve gone even better had we had Lelouch Lamperouge, voiced by Fukuyama Jun, talking to Slaine, instead of ol’ Count Saazbaum.

END_OF_DOCUMENT_TOKEN_TO_BE_REPLACED

This show has slight pacing issues. It feels as if they want to reach the first half’s finale at a certain point, which requires slight padding. Last episode had solid action, but most of the content within it could’ve been covered in considerably less ground.

What did matter last week? Humanity now has the power of Aldnoah on their side with Princess Asseylum’s aid, and Inaho shot down Slaine. Here is me going through why Inaho shot down Slaine, and what their little dialogue meant(Section 4, “Inaho’s Choice”). I’ll probably not do a super long note-taking write-ups for this show from now on, but rather focus on scenes as a whole.

1) “Deucalion,” the son of Prometheus (he who gifted humanity with fire), he built an arc, an equivalent to Noah’s Arc. So this ship is the last hope of Earth, so to speak. A fitting name. Hidden for a rainy day, when a “rain” will pour to wash away all life on this planet, a rain of debris from the moon, a rain of Orbital Knights.