Last episode left us and the characters with many questions. First, why did Smile lose? For Peco, the question is “Why did Smile lose all the prior times?” or “Why did he win?”, for Kong, the question of why Smile lost also matters, because if he went easy on him, then it goes to what he asked of Smile in the first episode – why does he go easy on Peco? And said behaviour can only lead to the deterioration of skills on everyone’s part.

But Peco still has to play against an old rival, first.

1) Yup, someone pointed it elsewhere and the episode opens with it. Kong doesn’t seem at all happy with his win, even though he was looking for games that will challenge him. He feels his victory is unearned. Coach isn’t impressed either. Throw the game, when your opponent knows you did, and rather than heal his heart, you just wound it further.

Perhaps that is Smile’s goal, to make Kong realize he shouldn’t place it all on the game, because his career right now is a sham, as Smile allowed him to progress without him earning it? If so, then Smile is cruel, but it might just be that he doesn’t understand people, so his attempt at kindness will not go as planned.

2) Angsty Kong. Hiding his depression behind his mirrorshades.

2) Peco is His Own Worst Enemy:

1) Peco tires himself out, and Sakuma barely moves. He’s playing right into Sakuma’s hands, trying to overpower him. He’s trying to make a statement, that he’d play straight at Sakuma till he won’t be able to return, to show his unrivaled strength, but he’s squandering his ability to win. He’s not thinking, and is motivated by the petty drive to crush his enemy.

2) “Just using blocks and lobs.” – Sakuma knows who Peco’s worst enemy is, and that’s Peco. His childishness, his petty drive to humiliate his opponent. Sakuma is letting Peco defeat himself. Perhaps Peco will be able to leave Peco behind and grow stronger and wiser…

3) This is Sakuma’s role here. Peco is a genius. Peco has talent. But since Peco has talent and never had to work hard, his skills are lazy. That works against normal opponents, but not against dedicated players. To be at the top of one’s field requires a combination of talent and dedication, and Peco doesn’t know what dedication is. Look at Sakuma’s line, “Your game is dripping with laziness and compromise.” The compromise bit is what Kong spoke of in the first episode, he never had to exert himself because Smile went easy on him.

Peco only cares to win, but having been handed his wins, it meant he didn’t have to develop his skills. Smile’s gift, his friend’s downfall.

4) While Peco can do nothing but look in amazement at his loss, Smile isn’t even looking. He knew this was coming. I think Smile had been awakened by the coach, when he commented on the laziness of Peco’s play. His blinders are off.

1) “The only way to never lose is to never fight.” – This truly feels like I’m reading Vagabond or Lone Wolf and Cub, here. The other option is to only play with people who will let you win, but you might then think you can win against outsiders, as happened here.

2) More pieces of wisdom with naturalistic shots: “Talented people who know themselves never crave anything.” – Along with a butterfly leaving chrysalis. Those who seek victory are those who need constant proof of their worth, who seek to use others to measure themselves. If you know your skill, you don’t need another in order to gauge it.

Holy shit! Kazama the god! So strong, so fast! Like lightning! Is his the electricity to awaken and power-up the doom-robot that is Smile? Pretty great music too, during the match.

A monster, a fraknestein, a titan, and I mean that in the classic Greek Mythology sense. A veritable Ping Pong superman. Kong has the look of a young mortal hero, but will he do it? Or will Smile’s “A hero appears” will be necessary? I can already see the imagery for when Smile and Kazama go at it.

3) Art, showing us what overwhelming superiority looks like. Ryu(uichi) the dragon, reaching across the table, casting his mighty shadow over his enemy. Kong realizes he’s a dragon, and all dragons should have a weak point, at least in western mythology.

1) Silly Kazama, he is offering Smile to turn Ping Pong into his life. Kong had just been told that there is life after Ping Pong. But to smile? Ping Pong had never been life. He lives a life that contains Ping Pong, he’s not a Ping Pong player who also happens to live.

3) Small Peco, just like a helpless child, crying when he loses, just as he did as a child – all alone. Sakuma called him “Candy-addict”. Peco is still a child, he never grew up. Kong received candies which he never ate, he had never been a child, for he had given his life to ping pong. Two who had lost, one that never tasted sweetness, and another who never did without. 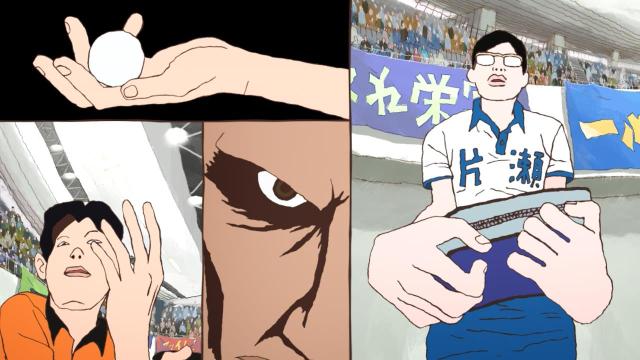 Yes, there’s now a potential goal for Smile, to defeat Kazama, but Smile? He doesn’t seem interested. This is the real question. What is it that Smile wishes for? He wished to be like Peco, but is it to just be Peco’s friend, which requires losing, which Peco will now know of, or to be the shining star of Sakuma’s past, who never loses, and who sets the tone?

The music was great, the acting was very good. Another great episode.

Return to the Ping Pong the Animation Episodic Notes page.