Until Next Time, My Friends

So, finale! Shiroe is prepared to move forward, he will do what he must, and trust in others’ trust in him. Teamwork, and trying to obtain everything at the same time. Seems action is imminent, and ending on an open-ended note. Well, let’s see how we close things off while leaving them open.

1) Of course the enchanter is the tank, when it’s your MP pool that replaces your HP pool, and when your MP is also the aggro mechanic, and when he’s the one who can regenerate it as well :P

3) This episode opened by making the healing abilities’ users appear cool, now Shiroe is super-cool not for any flashy skills, but for managing everyone else. Log Horizon is all about making the MMO’s in-game nerds, the supporters, shine.

1) As Roe 2 said, the Harvesters are lesser beings with less intellect than the Guides, or humans. They’re more like semi-sentient automatons.

2) The Genius is mixing talk of soul and spirit and computer access stuff. “Stand by” for “sleep”, “access” for “giving over their souls.” – Of course, here giving over your souls isn’t something that fantastical, it’s just handing over your MP. And by giving the energy, “particles will return to particles, waves to waves,” meaning to their bodies/beings in the other worlds, or taken up by the Harvesters for theirs?

3) Not lost memories, but memories given up, to rise again. But, aren’t those the memories that give you power, by reminding you of what you’re trying to overcome? But I guess giving them up you become someone more sure of oneself. A pickle. 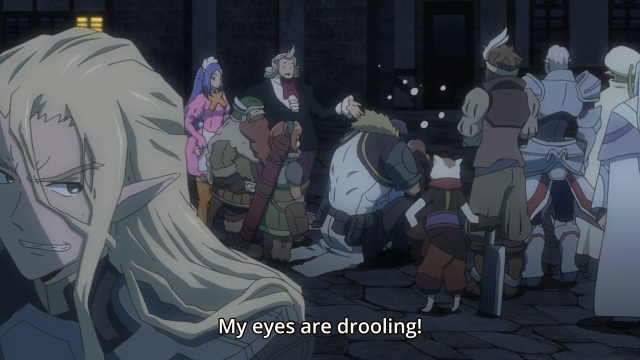 2) “I’m not crying, my eyes are drooling!” – Is this the new crying meme, a-la Mustang’s “Why is it raining” from Fullmetal Alchemist? Somehow I doubt it.

3) The talk of Kanami’s daughter might sound irrelevant, but it’s there to show us these people have lives outside the game, things to go back to.

4) Huh, the opposite, she wants to bring her daughter to this world. Interesting. Still need to get a way to move people between the two worlds first, though.

5) And of course, Regan messes things up just where the story will leave you the most hanging, and everyone else too. So, a journey to China, or Kanami’s continued Journey to the East? :D 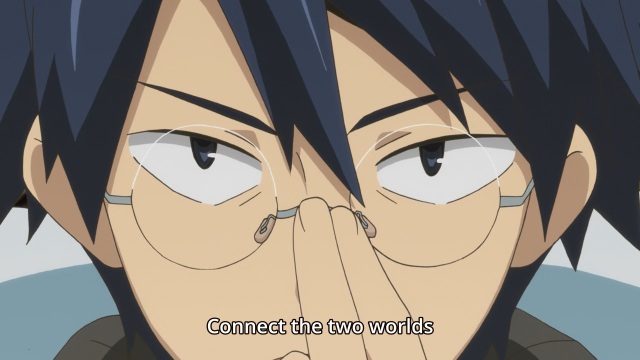 1) Ah, the person earlier commenting on Shiroe was a Plant Hwyaden person, that’s what DEEN art gets you ;-)

2) So, there was a split between members of the Debauchery Tea Party, and now we have Shiroe’s faction, and Nureha’s faction, though she wasn’t a member. Gotta hear what happened, and how Kanami will get everyone to be buds again.

3) It wouldn’t be Log Horizon without talking about food in the season’s last scene (“I miss mayonaise!” Oh man, never expected a fantasy series to tell me that. Then again, Sword Art Online also had Kirito quite excited over Asuna’s recreation of it :p).

4) Also, why did the comm devices not reach the moon? :< Then again, no one ever promised us they would, just a theory that did not pan out. 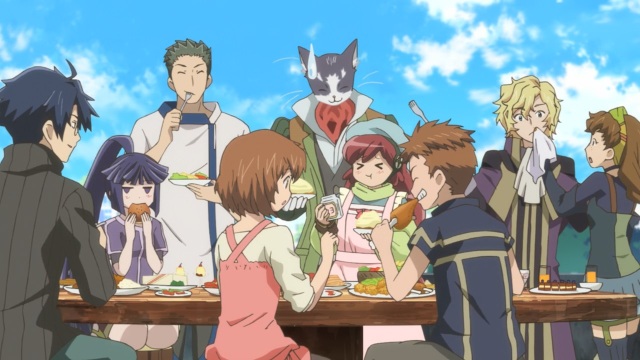 “Finding your place in the world”, or rather, “coming to grips with it,” had been this season’s theme, and the final conclusion merely reinforced this.

This season though, it felt good, especially in the first half, but once we switched to the kids, and then with the final arc, just like the first season, I couldn’t help but feel things were not only rushed, but that it all sort of felt stuffed down the show’s throat, as if they went, “Welp, guess we need an additional arc or two in here!” and it just sort of felt tired. The art didn’t help either.

Another fine offering, this time less focus on spending time with the likeable cast of the show (and the cast became less likeable with the inclusion of Tetra), and more time was spent on reviewing the theme from multiple angles, from Akatsuki’s place in Akihabara as distinct from Shiroe, bonding with Lenessia, William’s guild and place in the world, and the kids’ journey to finding themselves.

But the show also felt more tired than it did last arc. Log Horizon always felt as if it could benefit from a few episodes less, but here it felt like it needed half a season, or an entire season less. I’m glad to see this show take a breather, because it started to feel like it was buckling under its own weight.

6.3/10. I don’t feel this was a wasted watch, and some episodes, such as episode 10 with William Massachusetts’s “I Am a Gamer!” speech were legitimately great, but this show was so uneven. A worthwhile, if not always good watch, that about sums it up. Also, the art this season was really bad, yes.