New characters in Raira Academy, new people causing trouble in our never-idle Ikebukuro, and the paths of all the characters, old and new intersect. Let us see what sort of stories they weave for us. 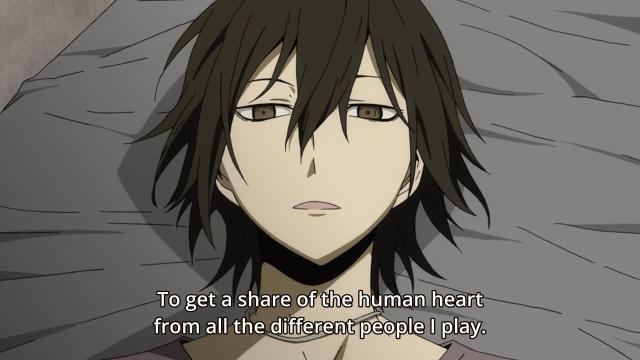 So, it’s that time of the week where I gush all over Durarara!! again, right? Yup, sure seems like it ;-)

Durarara!! is not a mystery story, it’s a story about people. I wondered how long it’d take until we learn who or what The Hollywood Killer is (and I forgot they keep changing masks, so thought we truly had an undead on our hands), but, the whole point of the Hollywood Killer existing is for it to appear in stories, by interacting with other characters. And this works best by it also being an actual character, just like Anri (Sayaka).

I could potentially see people disappointed over all the screen time given to new characters over the old, or specifically not getting as much time with old favourites, but does it really matter? I say this as the biggest of Shizuo’s fans, and as someone who always loves seeing Izaya on screen, but the show had always been about Ikebukuro, and about the “whole” that is the entire cast put together, and that charm is still there.

Speaking of old characters versus new, you know what hearing Kasuka’s little monologue made me think of? It made me think of the two sisters, and the sisters from Monogatari. This brings us back to how Karen and Tsukihi are fake to Koyomi’s genuine (and some of Kaiki’s talk of fakes, which wasn’t really about himself, but about the Fire Sisters). Izaya’s younger sisters tried to manufacture what the Heiwajima siblings have going naturally, one that is so full of humanity that he transcends humanity, and one who lacks everything his brother has, but who appreciates that, and is trying to see what it feels like. Did he not say he respected his brother in the first season? His brother, his hero, and the one all the characters he plays, no matter how over the top, pale in comparison to.

Hijiribe Ruri also reminds me of Shiki, from Kara no Kyoukai, for obvious reasons. I spoke of mysteries before, but we’ll grow to hear her story as time progresses. I thought she’d be sad after Celty’s comment towards her, because it does say she’s a monster, a non-human. But she made a good point, even the monsters in this town get to enjoy theirhumanity, rather than stand apart. There is yet hope for her happiness, if she only focuses on that, if she only focuses on the song in her heart when the sun shines and she interacts with people, or runs down a building’s wall.

The song that plays in my chest, whenever I watch Durarara!!

And of course, everything intersects with the older cast of characters. I leave you with a fail screenshot of Heiwajima Shizuo in action, a very fitting image, for the storm that he is.