Last episode’s best segment was surely Akane’s little story, it wasn’t “Up! level”, but it was good. It was a small vignette, a self-contained story in a show without many of these. What stood out in it that’s related to the show at large? Why, that’s easy, that Izaya manipulated little Akame. 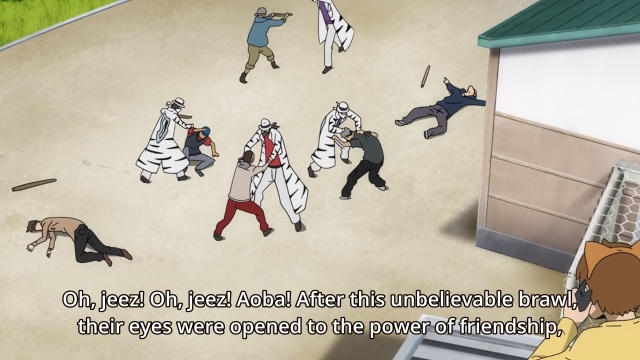 Sadly, not the actual outcome of internet brawls.

Kazutano! It’s Kazutano! Man, I don’t put all that much stock into pretty graphics, but if there were an episode of Durarara!! that I’d have loved to see receive “the movie treatment” with regards to production levels, it’d have been this one. So much was going on, and it looked fine, but it could’ve looked great.

Anyway, now that we’re past that, let’s talk seriously about what this episode is about. This episode was about ethics in game journalism. Wait, where are you guys going? I’m not just making GamerGate related jokes here, I’m serious!

Well, I’ll rephrase it, because I was a bit facetious in my phrasing, this episode is about the internet. The internet, where we can all act as we wish, a libertarian heaven, for real libertianism, not the neo-conservative political group that calls themselves that. A place with no laws, where we each act in our own interests, and many such like minded individuals lead to a great place for all. Sounds great, right? That’s what the people who created the internet thought it’d be like, and for a while, it was.

But we live in a different era. We know talkbacks, we know internet trolls, memes and stalkers. The internet is constantly gaining new rules, and rules of the outside world are being applied to it. This is the position Mikado is in. On the internet, no one knows you matter, and even if they know you matter, the truth is, you don’t.

Remember last season, with how the Blue Squares invaded the Yellow Scarves? We have the same deal here, with remnants of both groups entering The Dollars, as well as bona fide yakuza, and lowlives who wouldn’t be accepted in any other outfit. And thus the concept of “defending Democracy”, a democracy that allows everything, except those who’d stop it from being a democracy.

“No rules” is a myth. There’s no such thing. It just means everyone uses the implicit social contract rather than explicit rules. Sociology could tell you that social contract is mostly noticed when someone breaks it, because until one does, people just assume everyone’s on the same page.

So what is Mikado to do? Mikado will have to curtail democracy, to save it from itself. The Dollars will not be “lawless”, but “lawless-tag”, lawless up to the point where they cannot be. To some sense, it’s true, it will no longer be the Dollars as it used to be, but it could still be what it is at its core – a place for friends. Literally, you only need a friend to put you in. It’d be a way for people to share information, for people to talk. It’d be the internet, but with a moderator.

This has always been Mikado’s struggle, but it’s about time for him to make a decision. Not making a decision, that’s another myth, it’s a decision, with costs.

Also, if we’re back to GamerGate, it’s so very fitting, look, an image of some girl gets posted online, and people go and kidnap her/harass her. Why? Because they’re belligerent and a target has been provided.