(Guy: This post might be controversial, it also presents some of my personal views on life and life-philosophy. As such, I might find the need to moderate the comment section, if things get out of hand. Especially following this week’s Presidential Elections in the USA, the topic is even more topical than it always is. As always, this is not a review, but a Things I Like post, which contains spoilers for the Gatchaman Crowds series, though a bit more slight this time around.)

Probably the most controversial line in Gatchaman Crowds is when in episode 7 Hajime tells Utsutsu, who wonders how she can take all the crap that’s written on her online, “They’re people I don’t know. If I don’t like it, I can just turn it off.” This line is important enough that later on when Rui is bombarded by vile messages online after his identity is revealed, that it is repeated to him. This line comes off incredibly similar to “Grow a thicker skin. It’s your fault you care.”

The fear of doxxing and trolling.

Now, I’m going to address this line from Hajime’s perspective in a bit, but first I’m going to start with a controversial opinion I myself hold, but I’m going to actually break down why it’s not as controversial, perhaps, as it’d appear on first glance. The opinion is, “people choose to be offended.” And before you accuse me of saying that being offended is thus meaningless, people also choose to get married, and to have children. People still choose to kill one another. Choices aren’t meaningless, quite the opposite.

People are offended, quite often, based on social norms, “this is offensive” could be read as “This is something you should be offended when it happens to you.” A trivial example is spitting on someone. Even if those spat upon “choose” to be offended, it is because they’ve been taught that this is an offensive act. And the person doing the spitting, they not only know that this action is considered offensive, but they do it in order to offend. So if you perform an act that’s going to make most people get offended, then you’re still being offensive.

So what about when we tell someone something that we consider innocuous and they choose to get offended? It means that we still crossed over an accepted line, in a manner we didn’t foresee. We can accept that doubting someone’s self-definition is offensive, but we might not realize that a specific utterance doubts a specific listener’s self-definition, for instance.

And then we’re back to “they choose to be offended.” We know being offended sucks, that it hurts. The first goal of “they choose to be offended” is to try and remove the pain, remove the responsibility. Ok, so let’s say we’re not guilty of offending someone, what then? Imagine the person closest to you has “chosen to be offended” by something you said. Are you fine with leaving it there? Likely not. It doesn’t matter who’s responsible, you want to make it better. And when you don’t, it’s because you don’t really care enough about the person to try and make amends. Also, “I’m sorry you’re hurt” without saying “I didn’t mean what I said” from my perspective is fine, for what it is – an apology for hurting someone, but also an admittance you don’t really understand how lines were crossed, or that they’re not your lines. We’re not all the same people, and this whole lengthy segment is about how even if we don’t understand why something hurt you, or agree that it should’ve hurt you, we’ll do our best to not hurt you again, because that part we can sympathize with.

This incredibly lengthy digression, for an editorial that’s been housed within me for well over a decade, which should be summarized as “People choose to be offended. But that makes it more meaningful, because they make a choice, and in choosing to trying to understand or not trying to understand it you’re revealing how much they matter to you, as individuals or as carriers of opinion. You can still be offensive even if others choose to be offended, and you should still avoid it.”

So, after this lengthy digression, let’s go back to Hajime. Hajime at no part says that people trolling is fine. Hajime never tries telling Berg Katze to stop, and is never seen saying that what he’s doing is wrong. But do any of you think Hajime is supporting Berg Katze’s goals, or his methods? Probably not.

It’s tempting to make it all about Hajime’s desire for unmediated contact, but she makes use of GALAX, so that’s too simplistic.

First and foremost, Hajime is giving tools to those who are hurt by people outside their social circles, those whose skin is the thinnest: Rui and Utsutsu. It’s not trivial that right after answering Utsutsu’s questions she goes, “More importantly, didn’t we have a lot of fun today?” Hajime’s words aren’t a way to crush down the people who are offended and to tell them to not get offended, but a way to reach out and provide support, which is quite the opposite. It’s important that she’s telling those people to focus on the positive feedback and immediate connection to those around them, to focus on her support, rather than on the words flung at them by strangers. It’s not that these words don’t matter, but she’s telling them to act as if they don’t.

Hajime’s words aren’t a cry to the world to be offended less, but a mantra one should aim at oneself to get through the day. She’s saying, “haters are gonna hate,” and adding to it, “so focus on something else.” The latter in particular is Hajime’s message throughout the show, made clearest in “No one having fun would stop what they’re doing (just because someone asked, right?)” So the haters are having fun, and won’t stop. So focus instead on what is fun for you, and it’s certainly not focusing on the haters. Hajime is telling you to look at the sun. No, the trolls do matter, and do hurt you, but try to drown them out. It’s the only thing you can do, which might lead to you having fun. So do it. Or try. She’ll be there to help.

Here it’s important to see Hajime as someone who sees fun above all else. Personal and global. She wants even those who are having fun “the wrong way” to keep having fun, because that’s her goal. I asked earlier if we’d say that Hajime is supporting Berg Katze’s methods and goals, and that most of us would say she won’t. But while she doesn’t approve of his methods, she certainly approves of his main goal, which is to have fun (and she accepts him as lonely, and as empty under his series of masks, which is why he’s hiding so much). If it were up to Hajime, everyone would be having fun, but if some people’s fun infringes on others’, then that’s where she’d step in, in order to maximize the global level of fun. 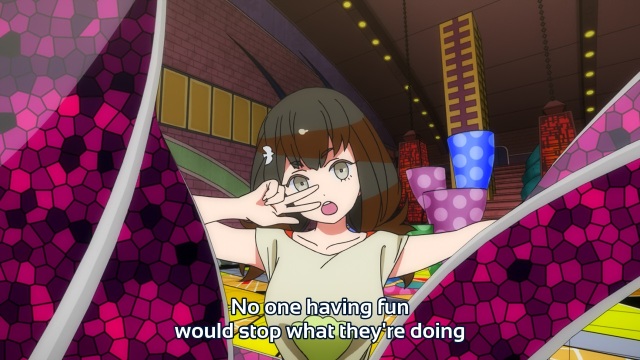 Taking responsibility of what she can control, is she absolving others?

The Neo Hundred aren’t wrong to try and have fun. They’re “wrong” because their fun impedes others’, and those impeded from having fun are the majority. But, Hajime knows they won’t stop just because they’re asked, and she only stops them when forced to. The method found relies on the core belief of the show, where people are inherently good. It is also the solution to Rui’s distrust of people, and his clutching of the power as a result. This is where gamification leads, within the show. Yes, people need a reward for their activity, but what the reward and the activity come down to is fun. In the end, it is a fight between the ideas of “fun” of two different parties. Their activities don’t differ all that much – using the powerful Crowds to take down others. But the goal is to bring sorrow and destruction, versus stopping the other side. It’s instructive and instrumental that the “good Crowds” turn it into a game, so even the method is fun, but so is the goal – they’re stopping others from having fun, true, but the true goal is to protect the fun of others.

So what can you do when you’re not having fun? You can stop engaging in the activity that’s bringing you no joy. And if you’re the majority, and others’ idea of fun is tied to actively making you have less fun, then you can group up and stop them. Yes, you can take this to bad places, but this show’s optimistic portrayal of people grouping up for fun, to protect not just themselves but others, is instrumental here.

So if people talk shit about you online? You don’t have to excuse them. You know it matters. But you try to focus on what you can do. And it’s easier said than done, which is why it’s an ideal, and why no one, at least no one that matters, is going to begrudge you your scars, and your make-up.

6 comments on “Gatchaman Crowds – Hajime, Fun, and the Response to Trolling”