This is a Studio Shaft show, more specifically, it is credited with Shinbo’s name, so many “Shaftisms/Shinoisms” are on display here, such as a head-tilt, a print on a dress that is perfectly aligned regardless of the contours of clothes,rails and a city under construction, amongst others. 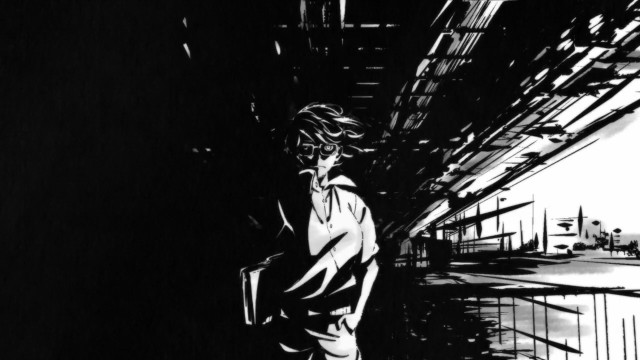 The real point here is that a lot of thought went into the construction of scenes here. Some of it is “just” stylistic touches, but some of it has meaning. Such as this sequence, where Rei travels to the Shogi Club, and he’s absolutely dwarfed by the architecture, he gets swallowed up by the environment. A lot of it has to do with pacing, which I’ll discuss soon enough.

Also, the mouths. Gotta mention the mouths. There’s a phrase in some books about people whose smiles or mouthslook like open wounds. It’s as if they thought of the characters here, you know? Hurts to see.

The quiet tune early on and the wind effects were both great, but by and large, this show’s music wasn’t anything extraordinary, but the visuals, a lot of love went into them. Really, just look at the screenshot album.

OP – I like it, good sound, good vocals. Imagery is effective, drowning, or perhaps even leaping in, standing in for loneliness, feeling helpless, and his old world being washed away. Combines nicely with the episode ending in a fetal position, as if he’s a baby returning to the womb. The darkness of and loneliness is contrasted at times with him reaching across and making contact, which is acompanied by light.

ED – I like it. Energetic, upbeat, good sounding. The visuals are the continuation and answer to the OP’s, in that now he’s actually working his way out of the water, he’s unwilling to remain alone and submerged, and is going for the source of light, the three sisters.

Another victory like this and Rei would be lost.

Ok, some of what I want to discuss here would fall under “Aesthetics” or “Construction” so it might belong in the above segment, but that’s sort of what you expect out of Shaft/Shinbo productions, and since it’s relevant to the story, I’ll put it here. The show’s first half, you know what it most reminded me of? Aku no Hana (Flowers of Evil), it was just so slow, so methodical, so unrelenting in its pace. I usually relate to such slow pacing as one that allows the material to breathe, but here it felt the opposite of it, and felt oppressive, which is where it was very similar to Aku no Hana (see write-up on the topic here).

I wondered why we’re doing things this slowly, and it wasn’t very enjoyable watching. I did feel as if every stone he placed in his shogi match was like a rock being placed. And then they explained it in the later half, that he indeed was fighting against himself, against this moment, where he felt as if he were striking his own father. The show might’ve told us he’s not his real father, but in his mind, he did call him by that name.

Speaking of which, the show was quite good in how it related this information to us. We saw him play against someone, and we knew they knew one another before. I thought that was his old teacher, whom he’s training against. Then they reveal to us it was an official match, so you think that perhaps the two of them separated and it might hurt one or both, and then they tell us he’s his father, and I went, “Whoa, and he lives alone like that?!” and then they dropped yet another rock on the board, telling us they’re not really related. One strike at a time, with just enough time for us to rearrange the mental landscape and wince even more at all the potential ramifications. It’s almost like how many thriller series are constructed, with just enough time for us to breathe before we let it out again in an agonized cry. 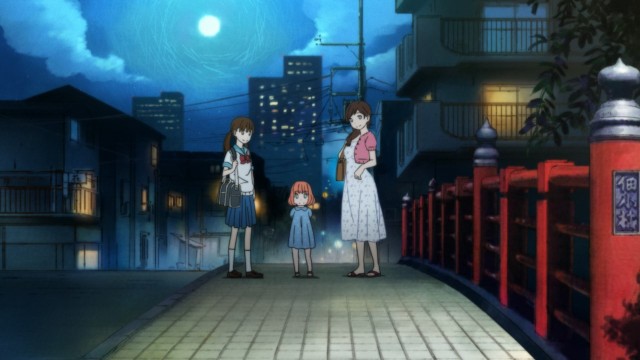 The second half was much lighter, because the tension of the first half was relieved. I am still not sure how I feel about the very stark contrast between the two halves, but it certainly made for a much easier watching, unlike Aku no Hana where you’d need a break after each episode. It also made sense from a thematic perspective, as the world of Shogi is the one where he’s constrained, and the girls are his relief, his outlet. Speaking of outlets, at school he is alone, because he is a an adult child, so naturally the childlike adult is the one who approaches him. But is he really an adult? Is he really mature? I think the answer is probably a resounding no.

Final stand-alone thematic thought, it’s the winner who ended up alone, which makes sense when you think of it, because it’s the losers who need comforting, not the winner. Except the winner is also a person. The loneliness of success, eh?

All in all, it wasn’t a thoroughly enjoyable episode, but it’s because it was intended to be oppressive, and it succeeded in doing so. Still need to see where the show is going from here, but it’s definitely in good hands, judging from the first episode.

Return to the 3-Gatsu no Lion / March Comes in Like a Lion Notes page.