This episode was good, once more! I really felt the absolute need to watch the next episode right after this one ended, only to find out that it doesn’t yet exist. Interestingly enough, the last time this happened to me was with another show directed by Itou Tomohiko – when I caught up with Sword Art Online’s first season around episode 17. Well, this was really good, and the emotional scene was very tightly directed. The music is very restrained for a Yuki Kaijura soundtrack, and the pieces seem almost copy-pasted over from Madoka, but as Satoru left Jun’s place, you could feel the mounting tension in the music.

Aside from how well-directed it is, one thing stood out in this week’s episode, the ice-skating race scene and how Satoru keeps reminding us he’s old and everyone else is a brat – the whole point is that Satoru did not change from when he was 11. He was frozen in place by what happened to him. He’s not a 29 year old person trapped in an 11 year old body, but rather, he’s the 11 year old kid who was trapped in the adult’s body, who’s now trapped once more in the child’s body. Mind and body of the same age, and hopefully he’ll be able to advance.

The final moments with the foxes and the tree was magical as well. This episode, and this show, are really good. 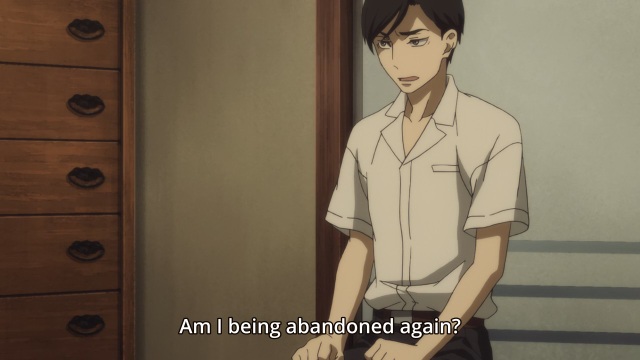 It’s nice when characters can pick up on textual metaphors. Huzzah.

It seems we’re clearly going to spend most of the show, or at least its first segment in the backstory, and that’s mostly fine. The pattern when Yakumo feels he’s constantly abandoned by people – first his mother, then his master, and his first girlfriend, is established, only for him to “abandon” the second girlfriend he makes. Whether it’s him accepting the pattern and using it, or growing up and understanding there’s no abandonment and only the way life works is unclear, but we did see a young person dealing with abandonment and life with and without others. Him growing to use Rakugo as a way to remind himself of the people he misses and the home he used to have was well done as well. 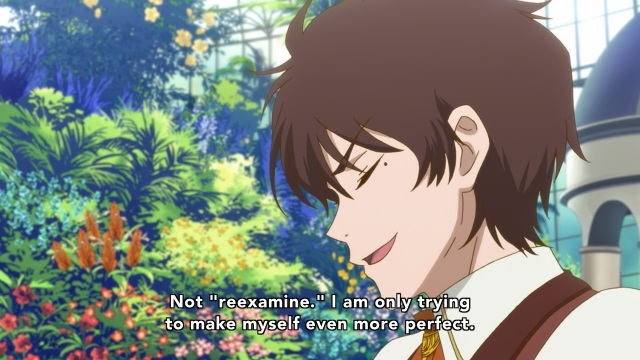 Admitting to others you need to change is hard.

This was a Raj episode. Which is to say, it was a Fukuyama Jun episode. It was also perhaps the funniest Akagami episode to air, and the funniest episode I’ve watched over the last couple of months in any show up to this point (but eclipsed by the 20 or so Great Teacher Onizuka episodes I consumed yesterday and today). It was less of a feel-good episode, but one filled with moments of laughter. I laughed, and had fun.

4) Hai to Gensou no Grimgar / Grimgar of Fantasy and Ash Episode 3:

The mightiest adventurers start at level 1 as well.

The “peeping on the girls” scene from last episode that felt superfluous had repercussions and took up the entirety of this episode’s first half, and kept having an effect until the episode’s end that didn’t yet conclude, so I guess I have to take back that they could’ve cut it, but it does feed into what I said in the first week, as a similarity to Log Horizon, where everything in this show feels padded. But it is nice that these things aren’t just played for laughs and then forgotten, but people remember what happened and keep acting on it like real people, who have real conversations, who wish to follow others and are uncomfortable hearing others rely on them. The drama is the focus, but everything in this show is just so slow. While we do get to really feel the grind of the daily lives of the characters, it’s not supposed to feel like a grind for us.

Regardless, the director has a firm grasp of interactions, and small moments, but also of action. The visceral and brutal atmosphere of the engagements, however short they are, is maintained. Even if this show doesn’t end up amounting to much, I’ll be keeping an eye on the director for sure, as was the case with Rozen Maiden (2013)’s Omata Shinichi, who’s directing this season’s Rakugo Shinju. But, this show could still be going places, and the content is still solid, just slow.

5) Kono Subarashii Sekai ni Shukufuku wo! / Give Blessings to This Wonderful World! Episodes 1-2: 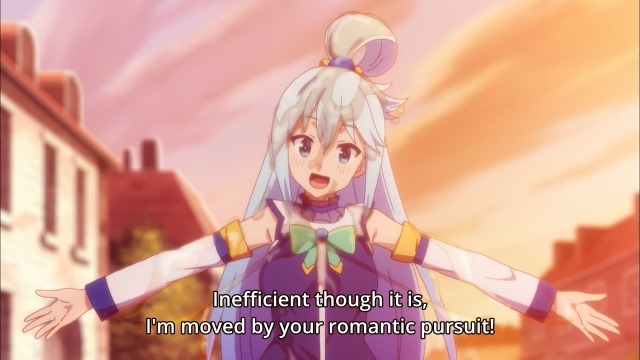 Most of all, this show makes fun of its cast.

People kept recommending this show, so I decided to give it a try. And it’s alright. It’s funny, in a mostly harmless sort of way. The “jiggly-bouncy boobs” is definitely a thing here, and focusing on Aqua’s ass as she speaks and walks is tiring, but sadly, these are “anime-normal” things, that are barely supposed to register, but that’s a discussion for another time.

So, the humor lands quite a bit, and much of it relies on deadpan faces as another character gets what’s coming to them. The cast is ridiculous, in a semi-endearing way. It’s a fun time-filler, but it hasn’t been rocking my world. There’s nothing that stands out as terrible here, and sad to say, that puts it miles ahead of most anime comedies already. So, I’ll keep watching for now, cause even if the show is pretty average-ish, it’s still enjoyable, and my docket is looking pretty bare right now.

Should you watch it? If you like characters with solid chemistry, some solid physical and character-humor, and generally fun times, you could do much worse. Don’t let my above paragraphs scare you away. It’s not amazing, but compared to most anime-comedy dreck, it might as well be. 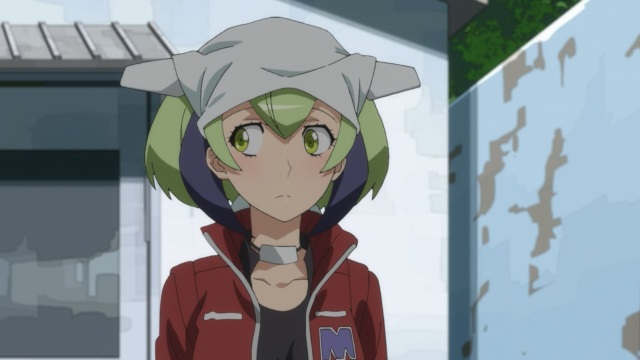 I expected Episode 2 to be Mira and Kyouma learning to live together, and episode 3-5/6 to be them going on cases together while not advancing the plot. Well, episode 2 advanced the plot and I thought we’ll keep going full-speed ahead. Nope. This episode was Mira and Kyouma getting to live together, and next week seems like it’d be an episodic “going on a hunt episode”. The whiplash from the change of pace was noticeable, and this episode’s main focus was “Isn’t Mira cute? Isn’t she adorable?” and while she is adorable, it’s less out of acting/being cute in terms of personality, and more mannerisms and look that are designed to be cute, and ye olde “Are you two married?” anime “jokes”.

This episode was pleasant enough, for an episode comprised almost entirely of tropey anime humor/feel-good stuff. It was an episode that needed to happen, probably, but there wasn’t really anything remarkable about it. Workmanlike. And full of cute Mira, if you’re into that.

This show is a mess, there’s no doubt about it. Dancing and singing “punishment game” carried over into a dancing and singing mecha fight. Villains that speak about “model adults” and come off extremely corny when I’m not busy laughing at how one of them spits a tomato mouth-fed to him by a servant of some sort, to all sort of stuff. This is silly stuff, but you still feel like the characters involved are adults, for the most part. We also get otaku-bashing, someone who’s dedicated to never making mistakes again. But the way it all comes together, and each of the elements. It’s somewhat of a mess. The show really needs to start throwing some thematic threads out there and trying to decide what it wants to be about. Right now it wants to be about “see how silly everyone here is,” which is actually relevant to the bureaucratic hell it’s trying to paint, but it clashes with itself.

Overall Thoughts on the Week: Still haven’t caught up on Durarara!!x2, and it seems I have no desire to keep watching HaruChika, and who knows when I’ll decide to pick up Gundam again, but I suspect I will at some point, but this week was full of moments where I chuckled, even if I didn’t laugh outright, but was also full of moments where I teared up, or felt the suspense of the scenes. I’m liking this season, and I’m liking that I’m not watching outright duds. 7 shows that aren’t outright duds, with 2 more that I should catch up on? I don’t think I’ve been this spoiled since last year’s winter season. How about that.

But still, the distance between the top 3 shows and everything that follows is noticeable, and I’m still tempted to only watch those 3 (and Durarara!!) and use the time for backlog/non-anime activities. I must tell you, I only planned to watch a wee bit of GTO yesterday, but after I started watching, I couldn’t stop. I forgot just how funny that show is. Backlog and rewatches are far too rewarding for time to be spent on underwhelming shows. Use your time wisely. You only live once, after all.

Dear readers, what do you think of the season as a whole, by this point? Anything you’re planning to or have picked up based on word of mouth that you didn’t check out originally?