Some background first, I really loved Sword Art Online’s first season, so friends recommended me two other light novel series, the first was Mahouka Koukou no Rettousei, which I really didn’t like, and the second was Heavy Object. Kamachi Kazuma, The author of Heavy Object is behind Toaru Majutsu no Index (A Certain Magical Index) which I found to be “okay”, and Railgun, of which I am a fan. The director behind the show, Watanabe Takashi, worked on shows such as Freezing, Ikkitousen, Senran Kagura, and Shakugan no Shana. So, shounen battlers is a genre I like, but I’m quite wary about this show, so let’s see how it pans out. 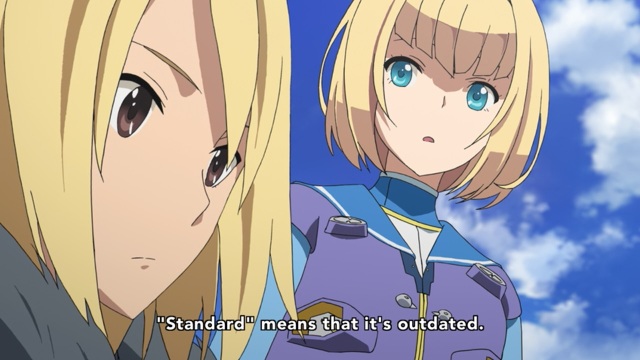 Isn’t this show too standard to allow such a notion? Even if the notion is wrong.

Let’s start with the summary, this wasn’t a bad episode, but it was a pretty bad first episode. Where is the hook? Where is the excitement? Where’s the first impression to make us keep watching? It really failed there, and even the exposition dump in the first few minutes wasn’t terribly interesting or elegant, but I guess if your actual goal is to try and get it all out of the way as quickly as possible so you could ignore it from then on, then it was indeed the most expedient manner.