Mahou Sensou (Magical Warfare), Mahouka Koukou no Rettousei (The Irregular at Magic High School), Fate/Stay Night: Unlimited Blade Works, Fairy Tail 2014, Gokukoku no Brynhildr (Brynhildr in the Darkness). This year had a lot of shounen shows which made me realize some things about how I watch these shows, and what I think of them. I still like these shows, or I wouldn’t watch them, I always have high hopes, and sometimes they are met, such as with Hunter x Hunter, or even Tokyo Ravens, but more often, I realize I’m not enjoying these shows as much as I wish to, and as much as I once had. It didn’t help most of the shows mentioned earlier were either outright bad, lacking, or just lacking in a certain way.

This realization actually started more towards the tail-end of 2013, with shows such as Unbreakable Machine Doll and Strike the Blood, but back then I ascribed it to the bad art and over-reliance on fan-service, in part. But it’s more than that, it’s also more than just me being too old and tired of these shows (my love for I spoke of before, more than once) – it’s the difference in how I watch them. Shounonsense (the female version would be “Shoujunk”, thank you AniTwitter) often just don’t have enough happen every episode, and you need to watch several episodes in one go to get anything out of them, and hopefully think slightly less on the episodes as you go, which my note-taking interferes with.

But no, some of the aforementioned shows are definitely not up to snuff. I’ll talk about it more at a later point, but comparing how I watched Sword Art Online, Mahouka, and Fate/Stay Night was and is a very interesting thought process. I do think if a show isn’t good (Brynhildr) or even terrible (Mahou Sensou), one should point it out. Did the anime scene change? I do think we get more “second generation light novel adaptations” now, light novels written based not on so-called mainstream teen literature or real life, but on other light novels. Mahouka Koukou was the best example of that, and the flame war on my blog is today’s moment.

With this in the first episode, why would I not take Brynhildr seriously?

What, a flame war? You see, I’ve read the Mahouka light novels, so I knew what was coming, and that it’d be problematic, but I hoped the anime would just make everything better. Of course, facing the same message again, I wrote a pretty long mass on the problematic messages contained within Mahouka, and the world-view they stem from and might lead to. I’ve named that piece “Mahouka Koukou is an Ode to Meritocracy!”, but I thought more about the negative aspects of it, see modern libertarianism, objectivism, etc.

Enter Mentar. Mentar went around the anime blogosphere, searching any mention of Mahouka he didn’t agree with, which denigrated the show or its messages ever so slightly, and argued endlessly, telling people passively-aggressively how foolish they are, and all that good jazz. Of course, of special note is him being a fan of the material since 2011, and although he often stresses how he’s not a “siscon”, the last time he went on such a crusade was with regards to OreImo, where his favourite character was Kirino.

Anyway, I did call out the fans of the show, to a degree. I did call out the show, and called out that identifying too strongly with material, any material, can have bad repercussions, and if the material contains such hurtful messages, it’s even worse. You can scroll down in the comment section, you can see someone trying to spam me with comments, who I then blocked, who then also took it to ask.fm. It was funny, he was trying to make a point of how I’m the one with a closed mind censoring the truth, while making my point for me that identifying too strongly with the material you consume, to the point where any attack on it is seen as an attack on your own person is unhealthy (see also my write-up for Log Horizon 2nd season’s 10th episode on the same topic.) 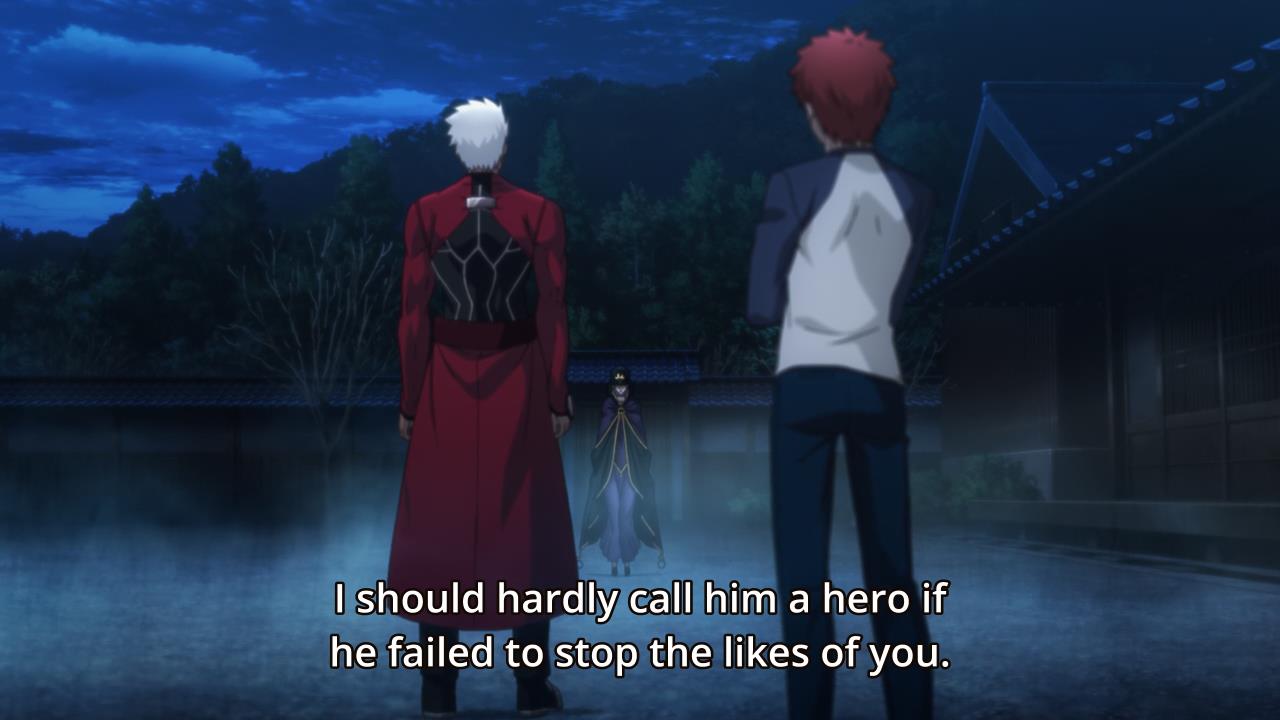 Sometimes when a show takes itself too seriously, you just can’t – Fate/Stay Night: Unlimited Blade Works.

This comment chain amused me, and annoyed me, and was a bona fide flamewar. Parts of it could be seen on other sites, but it also marks the point where Mentar more or less gave up on us heathen anibloggers, who can’t understand the greatness of The One True Tatsuya. He then also began blaming all the woes of the show on the anime staff, while most of the warts of the show come from the novels.

And we’ve had a topic drift here, eh? I may or may not be too old for shounen shows, I think much of it just comes from “watching them wrong”, which for me means one episode at a time rather than marathoning them, but I’m definitely too old for flamewars, except where I make fun of how involved participants get, because nothing worthwhile comes out of flamewars.

So, dear readers, any change in your tastes in anime you’ve discerned over the past year? Alternately, stand-out moments with regards to either shounen or shoujo? Positive or negative!
Bonus question, the time you’ve got most emotionally invested over anime this past year. Flame-wars require investment.