The following two answers had been given on ask.fm. I sometimes answer questions off of the blog and I think they’d make for good pieces. Specifically here, as following my almost infamous piece on how Mahouka Koukou no Rettousei is an “Ode to Meritocracy” I was asked or accused of condemning fans of the show for liking it. So I think this answer will be useful. The second question looks at a specific example of a show and whether it has subtext, and what it means if it does.

Do you think that, when making an evaluation of a piece of media, you are also (at least in part) making some statement about those people who enjoy that piece of media? e.g. thinking that Mahouka promotes a toxic message – does that mean you made a negative evaluation of it’s fans, on some level? Maybe sometimes somewhat?

Let’s say an anime comes out that promotes, as actual text, subjugating all the non-whites there are, and that Hitler was right, just as a hypothetical. Let’s say I make the judgment that the show’s message is toxic. Let’s say you enjoy said show.

Do you enjoy it for explosions, or for the romantic sub-plot, or for narrative structure? Cool beans. I’d still like to raise the things I find troubling with the show, but I won’t trot them out into discussions centered around these particular things that do not involve the show’s message.

Let’s say you like the show FOR those messages? Yes, I think that says you’re pretty terrible. But that’s because you support a message I find toxic. I think you’d be a terrible person even if you hated the show, but supported said messages. Most people don’t really fall here, they like the show, as is, and don’t really consider why – it’s entertainment to them. I’m raising my issues with it, and some of the insidious reasons it might feed into their egos which they would do well to consider. I raise it up, what they do with it is up to them. The judgment here is of the messages, not of the show, or the people who watch it per se.

Now, let’s look at another example. People watching actions with dumb action, or physical gags. When I say a show relies on physical gags, or has beautiful action but a lack of actual dramatic tension, I’m saying things about the people who like it – I’m saying they enjoy that sort of thing. I might also say I personally don’t care for these things, but there’s no claim for “objective worth” here. That’s actually one of the reasons people read reviews – if I describe a show for having these things, even if I say I dislike it, you know you do like them, so you’ll watch it for the very same reason.

That’s pretty trivial, but that’s the biggest actual part of what you’ve asked. I certainly make an evaluation on people who like things when I evaluate it, such as pointing out some of the things they might like it for.

Also, about cases of rabid fans such as in Mahouka’s case – the most rabid fans, on whom the criticism is often the most applicable, and even if not, fans that are fanatic in a toxic manner are those who go out of their way to bash anyone who says the show isn’t perfect. And that’s the final part of it – when you identify a 1:1 correlation between a show and yourself, you interpret anything said of the show as if it’s said of yourself. You’re the one who is arguing the show’s messages are your own, and reject the ability to criticize it without criticizing yourself. And then, you’re toxic quite often, regardless of the messages of the show, when interacting with other people.

Do you think there is any social commentary in Akame ga kill?

First of all, there’s social commentary in basically every piece of media. Whenever something is presented as “normal”, it’s often steeped with social commentary. There’s no escaping it. It might not be “commentary” as the author trying to actually make a point about anything, but it’s there as “this is our world.” 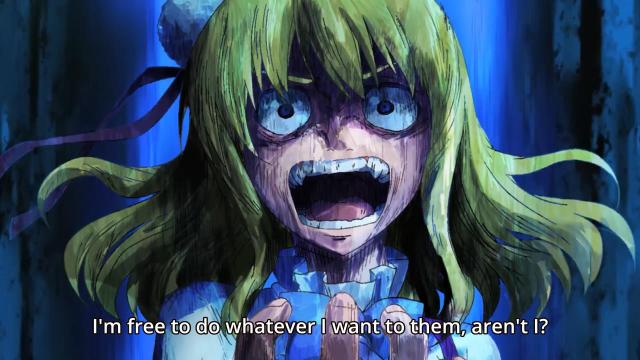 Then there’s also the “No”, since it’s a fictional world, much of the commentary that is intended, or steeped in, might not be applicable to our world, or is not intended as applicable. And sometimes it’s in-between. Star Trek and especially Deep Space 9 definitely have social commentary on racism, religion, and inclusion, and do so by allegories. But in some works, sometimes, things are ridiculous and don’t really make a point.

Akame ga Kill probably had a bit of everything. The “Women like shopping” bit is on one hand a manga gag, but it’s a sort of “acceptable gag”, which is the sort of social commentary one is so steeped in that they don’t even think of it as one.

“All killers are in truth justice fighters” is probably one that one shouldn’t take so seriously.

Money corrupts, and the rich and the powerful suck the poor dry seems like an almost intentional social commentary. Is it about our world, about the Roman empire the tale seems to somewhat touch on as a historical inspiration, or about all rich people?