Wow, we’re at the finale. Already. Funny I say that, cause thus far to me the show is closer to 9.9/10 than 10/10, because I just feel the whole dramatic arc would’ve worked better in a movie format, with everything being compressed, even as I don’t feel we’ve wasted time. The plot-structure follows the usual sports show, but the way it handles things is as a drama.

Time for Smile and Peco. The same situation as Coach Koizumi and Kazama the Eldest, two friends with one of them being wounded. But the whole point is that they must play while giving it their all, to enjoy it fully, to fly, to smile.

1) Donning The Past to Fight The Future:

2) Kazama had always been one to own up, to say it’s up to effort, and talent. If you win, it’s because your talent and hard work carried you. He lost, but he’d been at his best. You know why? Because he wasflying. Playing against Peco, his restraints, which he hadn’t even realized had been there, had been removed.

3) It’s like a carnival, everyone is acting as if there’s no more tension, “These players are good, Kaio lost, awesome, and we’re out.” Chilling, buying merch… but we know, the real game is about to start, the game that it’s all about. The game of friendship.

4) “Who do we cheer for?” – “Both. You cheer whenever either scores a point.” Coach Koizumi, I love you. Some people root with their all when their team scores, or cry out when the opposing team scores. Me? I love the plays. I love those tennis matches where I’d go “YES!” whenever either player scored. This is the best way to enjoy a match, if you ask me, even if the emotions might not run as high.

5) For the last 2-3 episodes I’ve been calling it, that it’s a rematch of Jou versus Kazama the elder, and now the situation is the same, and in case someone didn’t notice or forgot, the show reminds us what is at stake. Friendship – is it an act of friendship to not give it your all so your friend’s dream will live on, or is it an act of friendship to give it your all so both of you could fly? There’s no right or wrong answer.

1) “What happens when you go after a hero’s weak point?” – “Heroes don’t have weak points.” Which feeds into what I wrote several episodes ago. Smile became the big robot, the “Monster”, to force Peco to be the hero and defeat him. Peco must prove he is the hero by defeating Smile, and in so doing will save Smile from having to be the monster. If Peco loses, then he wasn’t the hero. This is the same situation as with Kazama, who killed the potential heroes, to show them that they are not.

2) “Third child, I musn’t run, AT field” – All those NGE references. Peco as “The Hero” :D A hero who converses with robots, and sees them as family. Peco mustn’t run away! He did, but he came back.

3) Peco is still as he used to be, as a child. Smile’s excitement is at seeing his hero having fun, and how he could be like him.

4) “It’s fun just watching” We know you want in, Smile! Good thing Peco roped Smile in. He gave him a name, he christened him, it was the birth of a new person, of a new road in life. One that isn’t locked in the closet, out of sight. Time for the spotlight at center-stage, Smile.

5) “Let’s go partner.” – “Hmm.” which is the same one he used when he was invited to play Ping Pong with Peco for the first time, when he was called out into the light. To play and have fun, it takes two players. It’s a cheap thing you’re doing here Ping Pong the Animation, making my eyes all misty ;_; 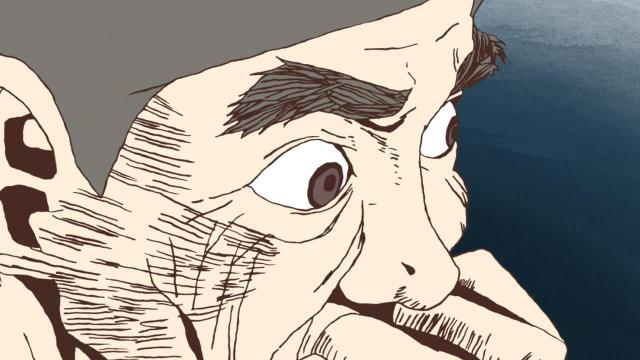 1) Coach Koizumi is shocked! To say he’ll crush Peco and drive a stake into his injury is one thing, but here he is, the consummate player, the robot, the best player who will let nothing get in the way of his victory. Or rather, the one who will ensure it’s a hero appearing. Fast-paced music, and the two competing lines – “My blood tastes like iron” and “A hero is sure to appear.” – He’s a monster, but he still wishes to be saved from this cage of steel.

Even “My blood tastes like iron” is a reminder of time spent with friends. Of fun, of knowing oneself. It’s not a sign of being a robot, but of being freed from being one.

4) The hero is, the hero is… the hero is so human that he transcends humanity, showing humanity the most it can be. The hero is joy incarnate. The opposite of the darkness-bringing monster, and the fun-removing robot. The hero is light. Of course he can fly, for his body is made of light.

1) Mountain-Sea dude needed to travel the world in order to come back home and realize it is home. Peco and Smile shine so brightly together that their light shines on all those around them, reminding them that loving the game so much as to quit it due to losing simply makes no sense.

Ha! He now said as much himself :)

2) “You won’t have to move, I’ve got a great racket for senior citizens!” – So lewd! ;-) But seriously, those old timers. Kazama the elder looks menacing and serious to everyone, except his old friends with whom he can be himself. “I thought winning will make everyone happy.” – His “toughness, grit!” message was aimed to make everyone happy by helping them win, but it put too much pressure on them, and took the fun out,especially when they’ve won. Good intentions and all that.

Of course, now we see all the children playing, we see how all of life is connected, how all the players are connected to one another, via their ping-pong, via their iron-tasting blood, via their lives. “We’re alive, that’s why we laugh. We are all alive, and that is why we sing.” – Smile can only feel alive, can only relate to others via Ping Pong, because that’s how he was shown he’s part of the community of the living. To Smile and Peco, to play Ping Pong is to sing. To sing is to fly. To transcend logic, and the boundaries of our lives. 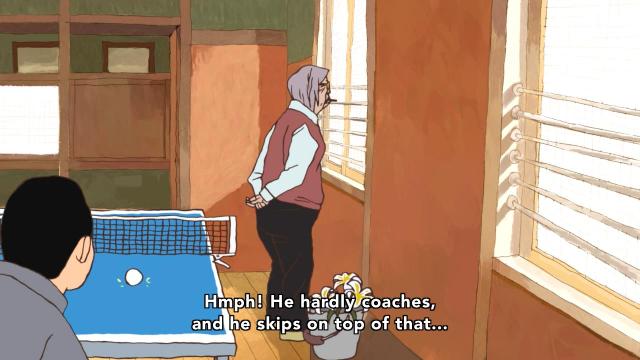 1) Time-skip! Smile passing on the joys of ping pong, and the love of his prior coaches! Also, “Today I’ll teach you a sweet unhittable serve!” – He sounds just like Peco, the one he wanted to become like.

2) Awww, love-struck Coach Koizumi, excited that Tsukimoto will come, hours from then.

3) Kong made a home for himself, no longer in exile. We’re checking in on everyone.

4) Kazama having no girlfriend “Did I go wrong somewhere?” – That’s what happens when the Hero arrives too late for you :P

5) “I don’t think staking your life on table tennis is such a bad thing.” – “No way.” Growth comes to us all, with some help from a hero.

6) Smile throwing away the old and discarded racket, he’s embracing his future. And Peco? Peco is still on his journey to the top. Will he get there? Does it matter? He’ll have fun doing his best on the road, crushing monsters, giving off the joy of Ping Pong. 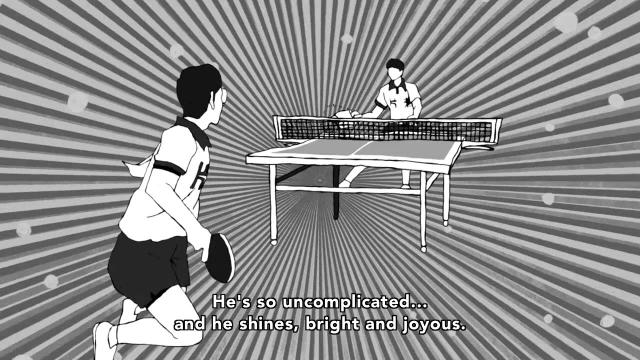 “It doesn’t matter which of them wins” the old ones have said. As Smile said before, they didn’t need to watch them, because they knew they’d win. Which one of them? Both of them. They won by getting to play one another, by going all out, and the other side reciprocating by going all out as well. The ping pong they love, with the people they care about.

I keep getting asked if I’ll write an editorial on this show. Honestly, where does one even begin? So many threads, and all of them important. It’s the tapestry of a life. And yet, it all ties together. This show’s greatest strength as a narrative is how nothing in here came as a surprise, everything had been foreshadowed, everything had been built up to, and no matter what happened, it felt organic, as if it had made sense.

This episode had multiple endings. But it made sense. This show was about a journey, a journey to return to the start. A journey to bring the beginning into the future. It wasn’t a journey where we lament our lost friendship, but where people fight to bring it back, through actions, and not through words. It’s the story of Smile and Peco, and the story of previous generations.

It’s a journey, and the journey of life never ends, which is why we had to see there’s life after the match, that it’s not do or die, that it is only the beginning of life, and of friendship.

This show had been a samurai drama up until the last arc, where the point was made that looking at life, looking at sports, and looking at friendships through the blade of a racket is no way to make friends, and lead a happy life. Through the match, they spoke, just like the samurai in manga do, but to them it wasn’t a discussion that had to end, with one’s swan song, but one that can be had time and time again.

It was a marvelous show, and I’m giving it a very hearty 9.8/10. I feel it could’ve been a bit shorter to make it stronger, even as I have enjoyed and thought everything that was there was good. It’s not mutually exclusive. Think I’ll check the live-action film.

Return to the Ping Pong the Animation Episodic Notes page.