Haibane Renmei is considered an anime classic. A series from 2002 that sometimes shows its age, and uses an almost rustic animation-style, focusing on dilapidated backdrops and humble characters. It’s a parable, focusing on death, birth and rebirth, on the nature of forgiveness, and our part in the tapestry which we call life, which we call society. And as with many parables, it also has morals it wishes to impart.

Considering the universal nature of the messages, or at least of the situations depicted, you’d think we could all relate to the story, and I think to a degree we all can. It’s a story of what it means to be human, or at least their take on what it involves. It’s a story on what it takes to keep living, and how society forms behind us. And yet, I think how much one appreciates this show would depend to a very significant degree on what they bring to it themselves. I feel one’s reactions to Haibane Renmei are going to be more personal than most shows. Even if to a degree it’s always true.

(This is a Things I Like post, it’s not a review, but more a discussion of the show and of ideas that have risen in my mind as I’ve watched it. There will be spoilers.)

The series begins with a fall. A girl is falling from the heavens, while crows try to stop her descent. Considering the nature of the show’s premise, and that we know it deals with the Haibane, winged people with halos, one wonders about the symbolism. Later, though they do not stress it, we find out that as with all “cocoon-dreams”, they involve the changing of situation, a mode of movement. Quite unsurprising, since it seems related to the way in which our characters had died. Death, a way to move from one world to the other.

After falling, and purportedly dying, we are met with a birth. A cocoon is found, and within the cocoon we are told there’s a person. The area is cleared, for one would not wish to be born into a dirty environment. Of course, when the water in the cocoon breaks, the room is filled with rubbish again. Then Rakka’s wings sprout, and it’s a painful and bloody experience. A clear symbol for the fact life and birth are hardly “clean” and easy, but messy affairs.

The show then follows the newly born Rakka as she tries to find her place in the world, her life’s meaning. Rakka visits with the other Haibane, experiencing what their jobs are, what their purpose in life might be. This part of morality, of how our place in the world is dictated by being a “productive individual”, and by our system of interrelations with others reminds me more than a tad of Suisei no Gargantia (Gargantia on the Verdurous Planet) which had the same message as one of its core themes.

Rakka is the “point of view” character, and supposedly the protagonist. We explore the world with her, and it’s a world of mystery. A foreboding world, where the most important thing is that there are mysteries which will not be answered. But I am hard pressed to call Rakka a “main character”. I spoke about it in my Horizon in the Middle of Nowhere piece, but classically supporting characters exist to shed light on aspects in the main character’s personality. Here, if anything, Rakka is here just so we could explore the town of Glie and how the other characters interact with it and live their lives. Then the main character in this section would be the community, and the mystery of the town Glie. 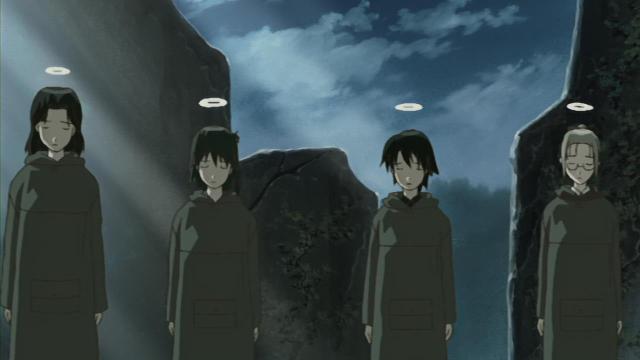 The second half moves us to what this show really is about, and opens with “loss”. One of the girl gets to depart limbo, having achieved her purpose in this life, and “moves on”. We’re then treated to different forms of grief, dealing with loss, and lines that are more or less identical to what media feeds us you tell kids when someone dies “We’ll join her, she just left before us!” – That it might be literally true in this show doesn’t change much, since that’s what believers believe in our world as well.

The nature of community as a theme is expanded on here, as “sin” essentially means to turn one’s back on community, to think of oneself as separate, to wallow in one’s sadness and grief. The exploration of depression, albeit relatively brief, felt relatively real. I can’t say I was much enamored with “Being depressed and turning away from society is a sin” being a message, even as the show stressed that it’s depression itself that casts you into that mindset. You think you are alone, and thus turn from others and can’t accept their aid, which in turn pushes you even further into depression and isolation.

It is here that we truly meet the show’s true main character, Reki, who had given up hope on finding solace in the world, and who keeps herself apart from everyone else. Reki who is “sin-bound”, caught deep in the web of depression, jealousy, self-hatred, and being unable to turn to others for their support, even as they try to offer it to her. Rakka performs the role of a supporting character admirably, because Reki reflects Rakka, but it is through Rakka’s struggles that we learn of Reki’s, and not the other way around.

I thought that while the “Riddle of Sin”, which is “He who recognizes his sin is without sin” was cute, it was also obtuse in a manner such zen koans should be, and also susceptible to being given interpretations by the viewer. But I also had a problem with the solution, which was again, “One cannot forgive oneself,” that felt almost Catholic, or Jewish. The nature of community was again stressed, but I think the upside is that it also tells you to care for other people, for only they could then care for you, and help those who are lost. 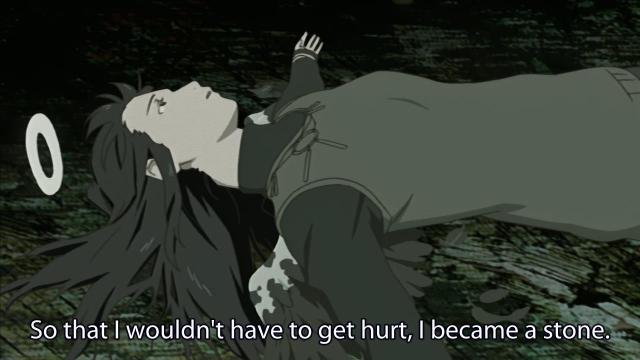 The acting in this series is solid and subdued. I found it hard to relate to most characters, for most of them had short semi-vignettes and hadn’t been presented as complete characters, and the acting didn’t cause further attachment. Reki’s acting in the last episode or two, selling us on her anguish and pain. In the end, this is a story with a moral, but it’s also Reki’s story, told on the backdrop of an ominous town with a large number of religious motifs.

I found the animation to be below par in terms of execution, and I liked the palette and style used. The instrumental opening theme was  uplifting and calm, while the ending theme was haunting. I liked them both quite a bit and didn’t skip them, as I am wont to do in most cases.

I think the storytelling in this show was well-done. Most topics and questions had been raised after being alluded to, or had been raised, we’ve been given an opportunity to think them over, and then the show had provided us with the answer or progress, which often matched what I thought they’d go through. This series was unsurprising, and I mean that in the best sense – it all grew organically, and fit the themes of life and death, rebirth and forgiveness quite well.

In the end, I give this show 7/10 well-constructed grief-cycles, and while it had told its story well, and explored its themes adeptly, I just didn’t feel much connection to it, which for this show in particular with its themes of loss and hope should’ve been very important. I had connected to such tales before, so it might be just the mood it had caught me in. I’d heartily recommend this show to others, for it does what it does well, and I can see many others would get more attached. My personal favourite treatment of the themes is Astrid Lindgren’s The Brothers Lionheart, my favourite children book.
I do suspect I’d have liked this better had I read it as a book, or had the acting been more forceful and convincing.

Check here for my episodic notes on Haibane Renmei.

What do you guys think of stories dealing with themes of death and forgiveness, depression and grief? Any that are your favourites?