Last week had had an episode about being a part, and being apart. About teams and loneliness, and how to be with someone, to be with a group, then both sides must be willing – you need to reach a hand, and have the other side accept it for friendship, or it’s a long fight ahead.

Peco is back for Ping Pong, for he remembered not only his dream, but that he had one. He also reminisced of old Smile – is part of his goal to fulfill Smile’s dream, by being someone for him to aspire to? Hm.

1) Training Your Guts Out: 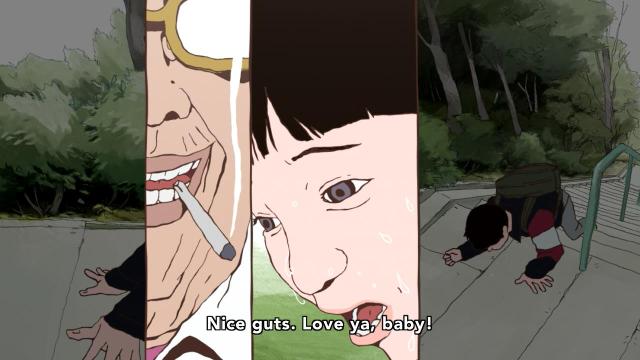 1) The episode opens with Kong, teaching techniques to his friends, without technology, and Kazama – alone, selling the superiority of technology, of relying on others’ skills and effort. No, he doesn’t believe it, but that’s the image he is selling.

END_OF_DOCUMENT_TOKEN_TO_BE_REPLACED

Mid-season of the anime season of Spring 2014 is upon us, so time to round up how I feel about the shows I’m current on. Due to the length of the list, I split it in half. The first part covered action shows. This part covers all the rest of the shows.

Shows are listed in order of enjoyment. Numbers are order on the list, and in parenthesis the order in the joint list, comprised of 13 shows. The first three shows in this section are my favourite three shows of the season, and they’re all at basically the same spot. They’re all winners.

This show isn’t all that interested in telling us a story we hadn’t heard before. That’s fine, because there aren’t many such stories. This series is interesting in not merely a well-constructed story, but also in one that is well-told. The acting is solid, and the characters are believable. You can understand what is at stake when every conflict is had, or what its purpose is – such as when they use a conflict in the first episode for a third character to look at it and explain to us what is really going on, which in retrospect shows that the “stake-free conflict”, due to how it’s the same conflict that had been ongoing for a while is merely a character’s never-ending capitulation.

END_OF_DOCUMENT_TOKEN_TO_BE_REPLACED

Last episode wasn’t about conflicts, as much as it was about fallout of conflicts, and about acceptance. Accepting that being at the top means you’re being alone, and the only ones who can understand you are your rivals. Friends, cast away; allies, discarded.

Smile is a lonely robot, he can do it on his own, but then, why did he lose to Peco, to stay around him? Why did he idolize Peco with his sure manner and quick tongue? And Peco is heart-broken and alone. Without his old friend, without Ping Pong to affirm his status as a victor, rather than a cry-baby.

1) The Destroyer is Here – But He’s Nice Inside: 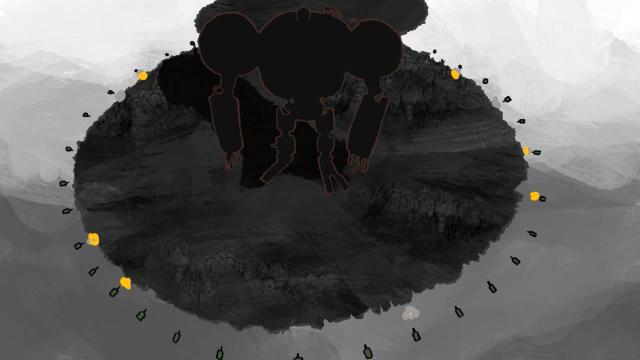 1) Yesss, the first scene in the episode follows my pre-amble! The giant robot is attacked by gnats, who keep poking at him, drawing his attention. But he doesn’t care, he’ll just smash them all. That’s Smile, and the others are his weak opponents, and his weak teammates, and perhaps his own emotions, which he eliminates, in one fell swoop.

END_OF_DOCUMENT_TOKEN_TO_BE_REPLACED

Mid-season of the anime season of Spring 2014 is upon us, so time to round up how I feel about the shows I’m current on. Due to the length of the list, I split it in half. The first part will include all the action shows, while the 2nd part, tomorrow, will cover the rest of them.

Shows are listed in order of enjoyment. Numbers are order on the list, and in parenthesis the order in the joint list, comprised of 13 shows.

I like shounen shows. I like popcorn shows. Give me some good action, with hot-headed characters, fights fueled by ideals, and some kicking music to go with, and I’m happy. Black Bullet does a lot of that.

END_OF_DOCUMENT_TOKEN_TO_BE_REPLACED

King of Thorn (Ibara no Oh in Japanese) is a well-produced movie. It in many respects didn’t remind me of anime (series), but of western films. The plot in particular, which is a death-game meeting a mindscape film.

At a pretty early stage, I saw resemblance to the 2009 film Pandorum, and also to 1997’s Cube. Later on they actually reveal some of those similarities, at least to Cube aren’t superficial, when Alice speaks of how the whole way the event had been orchestrated was so specific people would survive, so Kasumi could make it out – the dangerous criminal, the leader-cop, the nurse who takes care of the helpless oracle (the child), and of course, cannon fodder, along with someone who possesses internal knowledge to get them started on their journey.

(This is a “Things I Like” post. It’s slightly more “reviewy” than usual, touching on the themes and production, rather than exploring them in-depth. The 2nd half of this piece tries to explain the ending, the “mystery”, and also elaborate on character-motivations. Full-film spoilers ahead.)

END_OF_DOCUMENT_TOKEN_TO_BE_REPLACED

Mini-editorial, covering some points, one at a time. No episodic notes, but a bunch of editorial notes.

Full Title: How I Tried to Enjoy an Episode of Mahouka for Dumb Fun, To Find a Lot of Dumb and Too Little Fun ;_;

Woohoo! Action! The reason I’m actually watching this show. And to think I picked it up hoping it’d just be a light popcorn show with no real subtext or anything ;-) Twitter already told me that as I suspected (and feared) last episode, this episode won’t finish the Enrollment chapter.

It actually makes sense – all of the pieces they set up thus far, you need fights fueled by ideology to settle things. That’s how fights in such shows go – they’re not fights where the strongest person wins, but the one where the one with the ideological belief that is “right” wins. Well, it works in most shounens, where our heroes use the power of “Friendship!” to fuel their punches and overcome stronger odds.

END_OF_DOCUMENT_TOKEN_TO_BE_REPLACED

Somehow, the vignettes don’t stick with me, but the group episode (episode 3) was solid. What I wanted to watch now is late, so let’s give it a shot. Less/no notes? Let’s try.

1) First scene, we’re back at the clockwork tower. They meet, and meet again. Scarf-girl tells Shintaro he’s the only one who can see her, but didn’t she speak to Hibiya last episode? Is it perhaps Moorcock’s “The Hero with the Thousand Faces”, and there’s one “hero spirit” that reincarnates in various people? Perhaps she lies, or there are alternate realities? Or perhaps only he can see her outside of this place?
END_OF_DOCUMENT_TOKEN_TO_BE_REPLACED