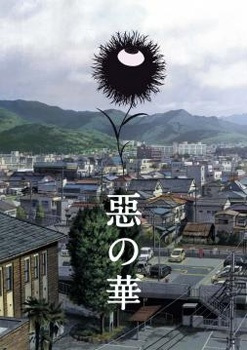 Aku no Hana, known in English as “Flowers of Evil” received the 13th spot in my top anime of 2013 post. I am not sure how much I “enjoyed” the show, but it certainly felt unique enough that I didn’t feel like I could avoid mentioning it on the list. Aku no Hana is based on a manga by the same name, which in turns draws its name from Charles Baudelaire’s “Les Fleurs du mal,” a French poetry book. The show’s “protagonist”, Kasuga Takao, reads and prides himself for “getting” the book, which he claims everyone around him is too simple to manage.

Usually I’m wary of adaptations, but I think the series format made Aku no Hana work for me in ways reading it wouldn’t have accomplished, but its failings as well might be unique to the series-form, which I’ll discuss again later. Aku no Hana isn’t a plot-driven, or even a character-driven show as much as it’s an atmosphere-driven show. Not much happens, at least not externally; most of the time is spent on waiting for something to occur, for the other shoe to drop.

(This is a Things I Like post, it’s not a review, but more a discussion of the show and of ideas that have risen in my mind as I’ve watched it. There will be very few spoilers, but not too many, cause not that much happens ;-))

Since the show focuses so much on suspense, on waiting, not just by the characters, but by the watchers, I think of it as belonging to the “psychological horror” genre, or perhaps the “psychological thriller” in the Hitchcockian sense. Suspense and horror aren’t based on “getcha!” moments where something comes out of nowhere and we instinctively recoil in our seats. You don’t hide the killer’s identity, but the opposite – you reveal that someone is stalking the character, you even reveal who it is, and when the protagonist and the antagonist share a scene we feel the tension that is in the scene, even if the character doesn’t. That’s horror, and it’s “skin-deep”, in the sense that we occupy the same (mental) space as the main character.

Our protagonist is probably the most spineless protagonist I’ve seen in anime in a long while. While people often joke about how Shinji from Neon Genesis Evangelion is a “wuss”, Kasuga truly is, and the show’s other main character, its “villain”, Nakamura Sawa, keeps berating him for it, and he never stands up for anything. That he is a wuss doesn’t make him a bad character. The reverse is true, if anything. In most psychological thriller/suspense shows and films, as I have argued earlier, the sense of dread comes not from events, but anticipation of events. The dreaded event finally occurring might elicit a feeling of catharsis from both us and the character, because the worst had already happened, and no matter how horrible it is, we’re now free of it.

Sadly for Kasuga, things don’t happen in this series, and what motivates him to both action and inaction, what makes him a “coward” is that he’s motivated by dread. He fears what Nakamura will do to him, what Nakamura will do in general. He’s afraid of what others will think of him, and whether they will find out what he has done. What has he done? Nothing of consequence, but instead of undoing it, or coming clean, he had let Nakamura slowly escalate things, and the more lies he piled on top of his previous lies, the more inaction, the more he allows things to escalate, and the harder it is for him to do anything, as the sense of dread of others discovering his “abnormality” consumes him completely.

Kasuga is not a likable character, he clings to his poetry book which he claims only he can understand as a manifestation of his unique-ness, he idolizes the most popular girl in class but claims he wants a “pure” relationship with her and gets almost violent at the suggestion this girl might have carnal desires. But for most of the show, we occupy his mental state, and although I often thought “If you only spoke out, you could be done with this,” I still understood him, I still occupied his place in the setting. Being in someone else’s skin and sharing their sense of helplessness, that is horror.

I tried to marathon this show for the sake of the “Top Anime of 2013” post I mentioned above, but it was a hard going for me. I have an easy time marathoning plot-driven shows, and a hard time doing so when a show is not plot-driven. If I had to describe everything that happened in the show, I’d need no more than 200 words to do it. The show is hard to watch not only because it is atmosphere-driven (and to me the most similar show to Aku no Hana is interestingly enough, K-On!, which is all about recreating an atmosphere (of nostalgia) as well), but because the atmosphere is oppressive, and you feel as if you need to take a breather after each episode.

And that is also why I wonder if I’d been impressed with the manga, had I read it. I read very quickly, so I’d have zoomed over the chapters the anime covered, and since I wouldn’t have had to draw things out, since I wouldn’t have had to feel every agonizing step in Kasuga’s journey as Nakamura strings him along, I might not have felt the same dread, I would have not felt the oppressive atmosphere closing in on me. Horror and suspense rely quite a bit on pacing, and having things drawn out,and while I’ve seen it happen in books, only rarely. Reading the manga would’ve been a more enjoyable experience than watching the anime, but I think that would have missed the point entirely.

The acting in the show is solid, the musical direction and sound effects heighten the suspense and are suitably creepy when necessary. The characters often require a shake, and are but kids who allow things to spiral out of control. Probably sensing a new season isn’t going to happen, they spend several minutes in the last episode in a sort of mindscape montage, showing us what is going to happen, and that’s interesting enough to make me pick up the manga. It’s very much a show about being human, about growing up, about feeling alone and misunderstood.

The show uses rotoscope, which emphasies all these small tics we often don’t notice, especially with professional actors or in drawn shows, and I wasn’t really bothered by it after the beginning, but I guess it adds to the rest of the show, adding to the effect of making things seem real, yet ever-so-slightly wrong. I give this show a 7.4/10 idealist and effacing protagonists. I think it’s a good show, but it’s not exactly “enjoyable”. The film that I find closest to it in feel is Philip Seymour Hoffman’s Before the Devil Knows You’re Dead – great film, but I needed a breath of fresh air afterwards.