Well, the year is ending, and I’ve actually watched a large amount of anime shows ending this year (over 60), so here is my list of the top 13 shows which ended in 2013. The shows and their positions are factored by how much I enjoyed these shows and how good (artistically, thematically) I think the shows are. Only full shows had been considered, no OVAs or movies of any sort. The names link to the show’s description and information on My Anime List (MAL). 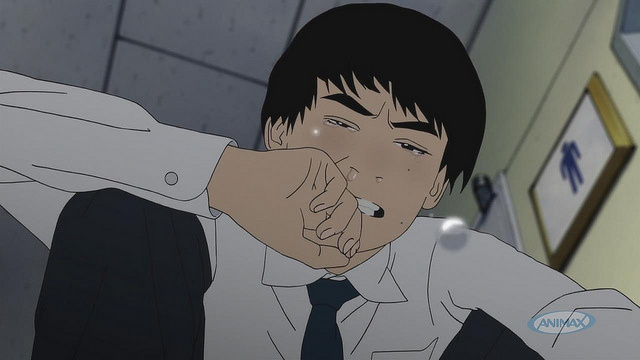 This show is all about atmosphere. An oppressive atmosphere of self-inflicted fear, of being closed in, that one can’t escape. Not much actually happens in the show, but the constant fear of what is about to happen, of what is going to strike our protagonist drives both him and us as we watch the show. It’s hardly a “fun watch”, with each episode weighing you down until you seek respite elsewhere. Its masterful control of psychological horror and how well it conveys Kasuga’s life and the feeling of the town in which he lives make this show one that cannot be ignored, however.

It seems that had there been a second season a lot more would actually occur, and all that happened in this season was merely a precursor, but due to exceedingly poor sales, that is unlikely to happen. The rotoscoping is interesting, but believe it or not, the show I believe is closest to Aku no Hana is K-On! due to its absolute reliance on atmosphere over plot or character development.