Tomorrow I’m going to post the anime moment that had left the deepest impression upon me this past year. I’ve already written of 10 moments, but here are nine more moments that I thought merited a paragraph each, of an exciting, impactful or “other” moment in my anime-related life from the past year. Why nine? Because tomorrow is the tenth, the big one (Order of following moments is arbitrary).
Moments will be included for: Sword Art Online, Samurai Champloo, Oreimo, Little Witch Academia, Suisei no Gargantia, Tonari no Kaibutsu-kun, Valvrave the Liberator, ToraDora!, and Kyoukai no Kanata. 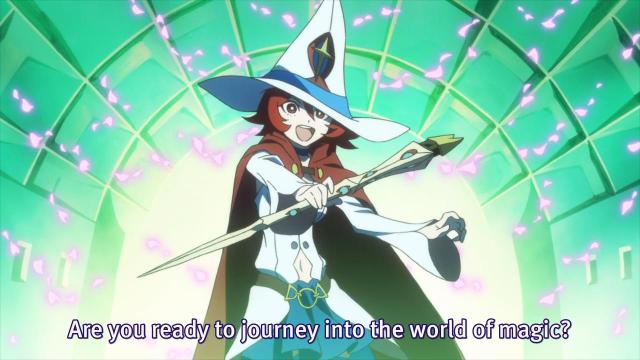 This sense of wonder, isn’t this why we’re here?

1. Little Witch Academia – A Simple Joy: This had been 20 minutes, and, well, just like the previous moment, it filled me with inexpiable joy. I felt like the character had in the opening sequence, I felt like I did when I’ve been taken to the cinema to watch Disney films as a child. There’s nothing extraordinary going on here, but as an experience? It struck me to the core, and I’ve rewatched it several times since. It’s not simply childish, it made me feel like a child, a much worthier feat. Every time I rewatch it, I get more excited, this is probably my #2 moment of the year.

2. Sword Art Online Light Novels – Emotional Manipulation, Sci-fi Moments, and Disappointment: After how much I’ve been affected by SAO last year, this year I’ve read the light novels, all of them. The next two stories not covered in the anime are quite heavy-handed in their emotional manipulation, but they worked, I might be turning into a sap, but it is what it is.
It only took him 12 novels, but the author is finally showing real signs of a science-fiction story/considerations appearing in his books. Sadly, it is marred almost immediately by resorting to the same cheap tricks to create a caricature of villains, as he had done with Sugou in the Alfheim Online. There are better ways to create villains than caricatures.

For that wide-eyed wonderment,

3. Samurai Champloo’s Finale – A Head Scratching Moment: When Samurai Champloo ended, it had just made me go “Huh?!” – It felt like a non-sequitur, like a non-ending, that doesn’t resolve anything. But after thinking about it some more, I thought it fit the show perfectly. The content of the show, the episodic nature of the show, and the message. It was a great moment, and that I actually had to pause and think for a few minutes about it made it even more worthwhile.

4. OreImo S2 – Eagerly Awaiting New Episodes: I really liked OreImo’s first season, and I’ve actually really enjoyed the 2nd season as well, once we got past the first couple of episodes. As each episode ended, I’d blink, look at the time, and be surprised that it was already over. I would eagerly await each new episode, giddy and excited about what it would bring. I felt like a small child on the night before his birthday (we don’t have Christmas here :P).

For someone being a bad-ass in mid-air,

5. Suisei no Gargantia’s Finale – A Hollywood Ending: I quite liked Gargantia, but as others watched the fireworks of the finale with joy, I watched those fireworks as the aftereffects of the show blowing up. How fitting that I liken this show’s ending to a Michael Bay film, where the explosion and the spectacle overtake everything else. Chamber gets to be ultra-cool (no sarcasm), but that comes at the cost of the show’s messages and his previous personality. Everything is just too excited and too unlike the show up to that point. The ending was just so Hollywood, in the worst meaning of the word. “AMORE!” shouted the pirate, in a very affected manner, and I facepalmed.

6. Tonari no Kaibutsu-kun (My Little Monster) – Great First Episode: This show’s first episode had my mouth agape. I like romantic comedies, though in anime they often fail me even more than they do in Hollywood films. This first episode was glorious, with both character confessing, accepting, and embracing their relationship. It was even quite funny. Too bad that they then regressed to usual RomCom beating around the bush. I still wish someone would recreate the show from the 2nd episode onward, and show us a relationship.

and for the comedic timing and precious expressions.

7. Valvrave the Liberator Episode 10 – Ugh: That episode, with the “consensual rape”, which I actually wrote a full post about (and how vampires are about invasion), I felt bad after watching the episode, and yes, it came out of nowhere, though in retrospect you can see how the show was building up its themes (which we took as “just being anime”, talk about a call to revisit our medium’s tropes and values), and going online to see how people discussed the episode, on twitter, reddit and elsewhere filled me with great despair.

8. ToraDora! – The Great RomCom That Wasn’t: A few years ago I tried to watch ToraDora by marathoning it and had to give up early. This year I paced myself until episode 12 or so from which I’ve marathoned the show. I think this is the single greatest anime RomCom I’ve watched to date, and it’s not actally a RomCom – it’s a drama, it’s about human nature and pain. Though like most RomComs the ending is as we expect it, the characters’ emotions and actions strike much harder, and even took me by surprise a time or two. A very worthwhile watch, even if the early episodes can be hard to slog through, especially if you’ve tired of tsunderes starring Kugimiya Rie, anime-isms, or silly RomComs. Stick through it, you guys.

And although all things must end, they may as well do it with a bang.

9. Kyoukai no Kanata (Beyond the Boundary) Episode 6 – A Studio, Freed!: This show ended recently, and had many issues. Most of the show’s issues could be boiled down to Kyoto Animation not getting to make the animation they wanted and are good at, a light animation focusing on humor and character interaction, and as such they took a dark fantasy romance and spliced it with their type of show, resulting in what is a pretty weak show on either front. Well, not episode 6! Episode 6 was completely unrelated to the rest of the show and felt like an OVA, but I usually judge OVAs by how “fun” they are, and this episode was a lot of fun. We’ve had the cast acting as if they’re idols, singing, a training montage, non-stop comedy, and no serious moments. It was the most fun I’ve had with the show, and it drove home exactly why the rest of the show suffered, by being so good. But at least it’s a pleasant memory from the show :)

So, dear readers, I guess the question here should be obvious – any moments that stuck out in your memory from the last year, from anime or other media, that you’d like to share?