Most shows are either plot-driven or character-driven, so it’s nice to have shows that differ. Shin Sekai Yori which made it into the 11th moment post (They Still Make Mature Anime), is a setting-driven show, where much of the focus and the author’s care is about expanding the world within which the show takes place. Gatchaman Crowds belongs to an even rarer category, a true-blue theme-driven show. There aren’t many of them around, especially not well-done ones, so Gatchaman Crowds was a special treat for me. 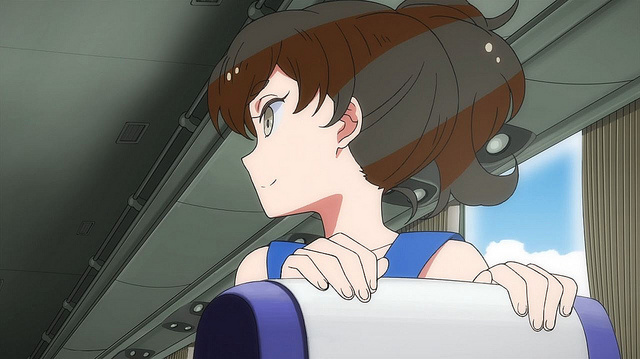 Ichinose Hajime’s smile can ward off the darkness

Not only did I enjoy watching Gatchaman Crowds immensely, I also enjoyed thinking and writing about it (see my lengthy episodic notes on the show), I enjoyed discussing its themes and ideas (of which there had been too many to count) with others (on reddit), and I’ve enjoyed the show itself. I enjoyed it for its themes, and I enjoyed it for its characters, and its bold nature in knowing what it wants to do and going for it, in its quirky nature.

In case you hadn’t noticed, I like thinking, and perhaps over-thinking shows. I like thematic discussions, and I perhaps enjoy it even more when the show only raises the points but leaves room for us to actually weigh in on them ourselves. Gatchaman Crowds gave me exactly that, and not only that, but numerous times while watching the show I commented on why characters act the way they did, or where the show/themes are going, only to have future episodes confirm these statements. I’ve also had it happen recently with Kyousogiga and Kara no Kyoukai, for example, and we all appreciate these things.

So, you ask me, what did I enjoy about Gatchaman Crowds? Its characters, plot, themes, thinking of it, discussing it, feeling affirmed by the show – that is to say, the show making me feel clever, rather than feeling the show is clever?

To which the answer is simply, “Yes.”

So, dear readers, any moment this year where something you’ve watched had felt like it was directed at you, or a show where the themes spoke to you in particular?

And now, here are thoughts shared by others, related this time to Gatchaman Crowds or thematic appreciation of shows:

In brightest day, in blackest night, I trust Hajime to make things right! :>

Is New Girl dubbed in Japanese and shown in syndication over there?? Was (500) Days of Summer a huge hit in Japan or something?? Why would you base an anime character on Zooey Deschanel? Why her? Is it because she herself runs around like she’s been watching nothing but moe since she was eight? I don’t even know if that thing watches anime. I hope she never sees Gatchaman CROWDS because she’ll immediately want to do a live action version with her in the main role. Why is this a stand-out moment for me? Because it’s one of the few times a show with one of the most grating main characters I have ever seen, still manages to be so good that she cannot ruin it. It had so much style, it’s soundtrack was unforgettable and I loved everyone else in the show. As much of a flaw as I found Hajime to be, she was a small flaw in a great show and I will be watching season 2. . . .I just hope Zooey Deschanel won’t be. (and hey, she still has more redeemable qualities than Maya Mari from Samumenco).

“only junk gets second seasons”

Yeah, I seriously believed that. Then out of my wildest dreams, Psycho-Pass, Gargantia, Gatchaman CROWDS and finally Jojo’s Bizarre Adventure get renewed. Jojo was of course the one I wanted the most, and had the most reason to expect (Stardust Crusaders was a given), but the other three i didn’t see coming. I’m so used to having potential just left behind. I’m so used to the shows I enjoy not being popular enough to continue. I was majorly surprised this year.

Uchouten Kazoku was one of those anime I added for the summer season that I didn’t really give much thought to. It was one of those “I guess I’ll watch this” type of shows. As the summer season went by,Uchouten kazoku was subtly becoming a show I anticipated every week. As soon as I realized it, I was already immersed in the world and the characters. When tragedy struck, It made me want the characters to succeed and overcome any obstacles as a family and it made me treasure my family even more. It quickly became one of my favorites from the summer season and maybe even one of my favorites of all time.

So I adore Mawaru Penguindrum, but due to how niche the show is I don’t reccomend it often. Early September I was able to show it to a really close friend of mine and he ended up loving it. We decided to dedicate the 20th of every month we feasibly can to celebrating curry day. Needless to say September 20th was a great day with homemade apple curry. The thing is Ringo was 100% correct when she said “curry has the taste of happiness”.

Bobduh’s Nisemonogatari Write Up: (Link by the management)

This really marked the turning point for me and how I experience and appreciate my media. While I noticed themes and things in stories, never really did I make them the center of my viewing experience until I read about how rich the subtext of these stories can be. It opened my eyes to a beautiful new world and brought a certain understanding as to why I am drawn to the type of stories that I am.

The dynamic between the two Raildex series is fascinating to me. While they each build on, and draw from each other, they are practically night and day as far as their execution, construction, and literary goals. It’s hard to really nail down what makes Railgun work, and Index fall on its face. You could argue that the day-to-day doldrums of a walking electric superweapon are just inherently more interesting than the magical adventures of Yuji Everylead cipher, Touma. It could be the tighter focus on a more central cast. It could be Railgun’s less ham-fisted moralizing. It could just be that Railgun has better writing. Whatever the case, Railgun and Railgun S cemented Misaka Mikoto as not only my favorite anime heroine of the year, but easily one of my all-time favorites. Also, somebody get on a Kongou and Swim Club SoL spin-off. A Certain Haughty Ojou-Sama.