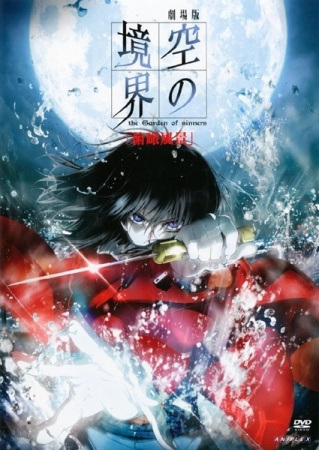 , also known as Garden of Sinners, a series of 7 films with a psychological / supernatural focus. The first is called Fukan Fuukei or Overlooking View, and is 48 minutes long. This series of movies almost feels like a series, and is the current focus of an online anime watch club I’m participating in. I will share write-ups written for the club, which aren’t written in the form of notes, but also aren’t me trying to come up with a specific point (thus far).
Final and important note – these write-ups are written after watching each movie, not the whole series of movies. Spoilers of movies beyond the one numbered in each entry will not be tolerated.

This is a Things I Like post, it’s not a review, but more a discussion of the show and of ideas that have risen in my mind as I’ve watched it. It’s relatively close to a review though, as aside from describing the movie’s plot I actually go over it pretty closely. There will be a fair amount of spoilers.

First thing first – this is directed as a movie. Look at all those “dead moments”, those quiet moments where “nothing happens”. Shiki waking up, people just standing or walking, without music, and most of all the pretty long sequence where Shiki had eaten her ice-cream. You can see it in shows, often by the BBC, and say in Ghost in the Shell: Stand Alone Complex and Serial Experiments Lain, but it’s much more common in films, and usually not in Hollywood films either.