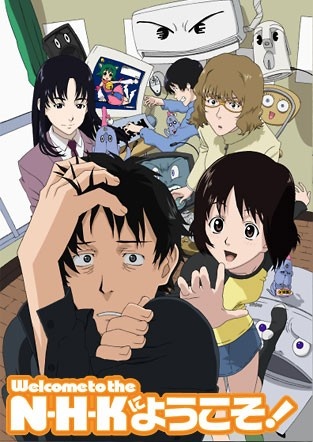 Unlike some other shows which use someone being shut-in as a comic relief or to show how weird they are (mostly with secondary characters), or as a setup for an uplifting story where the main character learns to overcome their problems and joins the productive life in society without a lot of trouble and effort, Welcome to the NHK stands as a more serious reflection of the issue, where the return to society and the trials and tribulations this puts in front of the characters are serious and hard to overcome. Unlike shows where someone being a NEET (Not in Education, Employment or Training) and/or Hikikomori (shut-in – someone who doesn’t leave his home) is used as a characterization of a character, here it is the crux of the main character’s story.

One of the things that actually made me think of the show is a recent discussion of Game of Thrones I’ve read after the now-infamous Rains of Castamere episode (As a book-reader, I’ve waited very long for this episode to come out so I could discuss it with people); many stories build heroes – they have them fall only for their inevitable return/revenge later on. Game of Thrones and Welcome to the NHK don’t do that – you fall down because life is tough. You fall down, and the story is allowed to be sad. You fall down, and no one guarantees you will later rise from it.
Welcome to the NHK gives a much more mature treatment of human emotions, especially those who run the negative gamut.

(This is a Things I Like post, it’s not a review, but more a discussion of the show and of ideas that have risen in my mind as I’ve watched it. There will be light spoilers in this post. This anime is based on a novel by the same name by Tatsuhiko Takimoto).

Tatsuhiro Sato is the protagonist of the show. He’s a 22 year old college dropout and had barely left his room for the past three years, except going to a nearby park at night to smoke. He suffers from social anxiety, depression, and paranoid schizophrenia. He believes his hikikomori state is to be blamed on the NHK (which in real life stands for the Japanese version of the PBS). The show begins with him meeting a girl who tells him she will pull him out of the world of hikikomori, we see him reunite with an underclassman from his old school club who is a full-blown otaku eroge game developer, and he also meets his heavily medicated upperclassman from the same club, who had told him of the conspiracies that surround us everywhere in life.

The characters, especially when listed like that, seem completely whacky, especially when you consider that Misaki, the girl who tries to save Sato does so not out of kindness – but out of desire to find a purpose in life. She feels completely worthless, and is actually looking for someone to look down on – in fact, one advice she provides Sato which backfires when he goes out once is “You feel anxiety because you feel you’re worth less than people around you. When you’re around people imagine they’re all inferior to you.” But this is not what the show is about – these characters do not feel like caricatures. They feel like real people, with real insecurities, with real backgrounds, who struggle with the lot life gave them.
It is not that life is necessarily tougher for some people from the onset (and sometimes it is, such as when we learn Misaki’s background) – but we do not all deal with things the same way.

A statement said towards the ending of the show that originally seemed to strike me as profoundly true was when Sato realized people can be hikikomori because their environment permits it – their parents let them stay and live with them, they get allowances which lets them live as they do, people buy their groceries and/or cook their food. People would be “forced” out of being shut-in if their environment didn’t “enable” them.
Then I thought back – I’ve met people, from 22 to 60 years old who spent every day in a mental care facility, and the evenings at home, after falling into depression, psychotic breaks, and other emotional hardships in life. They received a temporary disability stipend from social security for being unable to work. Sure, this still requires you to go out and receive help or be sent there by the people around you.
And this brings me to the other point. The “treatment” Misaki provides would probably be categorized as “Exposure Treatment” – forcing someone with a phobia to come face-to-face with that fear. But no one can truly force you, and if they do you might act as a zombie who goes out and “lives” because there is no other choice but to starve, but you go out as an introvert who suffers in social situations and the emotional damage just piles up.

From a personal perspective, I also have interest in NEET/Hikokomori stories because I feel close to them – even though I work nearly full time while pursuing my Master’s degree currently, I feel very close to it – the feeling of “Why go out there? It’s such a pain. Life is so hard.” is something I often think and experience. Also, in the final year of high  school one of my classmates stopped leaving his home one day, and stopped attending classes.
The opening episodes of the series were a bit hellish. I often think of nightmares as revolving around sound, and when we see some of Sato’s hallucinations the music and animation style are fittingly overbearing.

Conclusion: I give this show 9/10 human failings. This show isn’t going to tell you an uplifting story about the human spirit, so don’t go in expecting one. You’ll see pyramid schemes, online suicide pacts, and in general human sadness. What you will take out of the show ultimately depends on what you put in, so it might not be fit for all audiences. I am also loathe to suggest it to people who are wont to suffer from depression. Should you watch it, however, I think you will find it time well-spent.